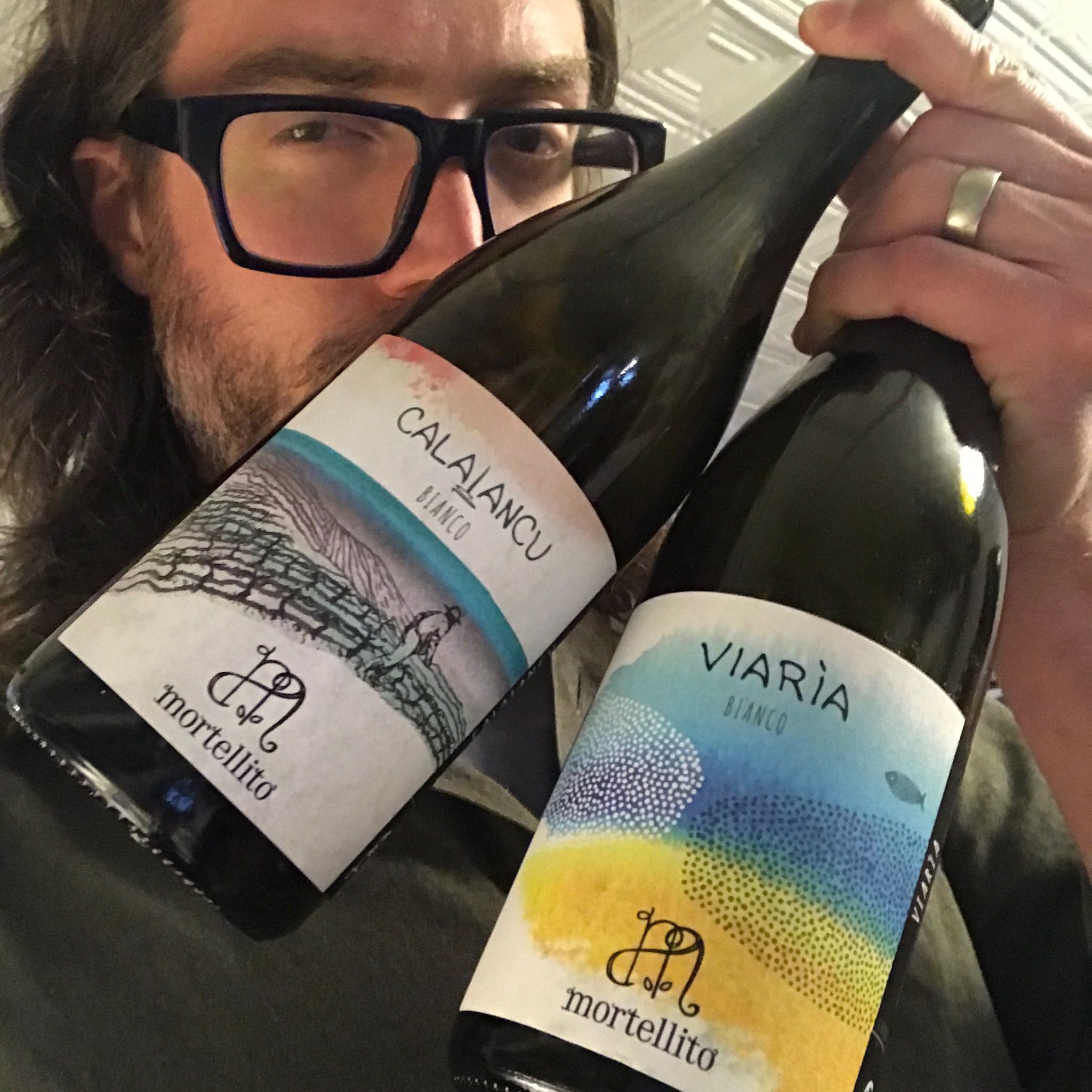 FIRST, A REMINDER THAT WE'RE TASTING BOTH OF THESE SETS OF WINES HERE AT MCF TOMORROW (Wed, 6/19) from 5-7pm.

Now for the good stuff...because this stuff is good...

Even though it's not my usual format, I'm sending a 'dual' offer today, so apologies for the length.

It's a 'dual' offer in the fact that I'm offering two different sets of wines from two absolutely fantastic producers, one from each of Italy's two island regions - Sicily and Sardegna.

Part I is for Mortellito, a set of incredibly delicious and totally unique 'naturalista' wines in the Val di Noto region of Southeastern Sicily.

Part II is for Silvio Carta, a set of super-traditional oxidative wines in the ancient style of Vernaccia di Oristano.

So here we go:

I know because he just dropped into the shop last week and I was struck by how seriously he discussed the soil and climate of the Val di Noto, all while swirling and sipping his wine in a very laid-back way.

I was also struck by how unique his wines were, especially in the context of the rest of Sicily.  His Bianco Calaiancu 2018 is a blend of Grillo (90%) and Catarratto (10%), and it's one of the coolest wines made from either grape that I've ever had.

It has an unmistakably 'Sicilian' nose, with its flowery, savory and lightly tropical notes, but on the palate, it goes much further down the stony/savory/briny path.  It's at once lightly refreshing, but also has an intensity of character that gives it a more serious edge.  So I guess it's kind of like Dario himself...which I guess makes sense.  In all seriousness, though...this is seriously delicious.

His other wine that I'd like to offer today is the Viaria Bianco 2018, made of 100% Moscato di Noto.  The dry Moscati of Sicily are a breed of white wine all their own, blending the highly aromatic, 'sweet' flavors of Moscato with the arid, dry climate, producing a wine that is even more intensely floral and minty, but with a tongue smacking dryness on the finish.  In between you're getting hints of that nutty savoriness as well.  What Dario is especially excited to point out about his dry Moscato is the fact that it's actually quite ageworthy, getting more savory and interesting as it sits in bottle.  'The mint flavor turns to Balsamic...', he says.

It was enough to make me bury a bottle deep in my stash...

These are seriously cool wines.

On the Western side of Sardegna, we find one of the greatly underappreciated styles of wine on earth, especially when you consider how far the oxidative wines of Sherry or the Jura have come in terms of popularity over the last decade.

The Carta family has been making this delicious, old-school style of wine for generations and theirs are definitely some of the benchmarks.

I suppose I should mention that the 'style' is Vernaccia di Oristano.

I actually came to fully appreciate Carta's Oristano at an Omakase bar of all places.  Mike, Josie and I had just sat down to a counter full of bottles that we brought to enjoy that night, and Mike pulled out a bottle of Carta's IGT Vernaccia Vallee del Tirso and said 'Let's start with this one.'

Josie and I were both rather surprised, but Mike said 'Ernest (who imports Carta) swears by Oristano and sushi, there are a lot of similarities to Sake...'

Having never thought of it that way, it took me a second to wrap my head around this idea, but it did seem to make sense.  One sip with a bite of sushi, however, and sense is all it made.  The delicately nutty, fragrant and wonderfully salty profile of the Tirso worked wonders with the delicate fish, all while always maintaining a back seat on the palate.

If that was the lighter, Sake-er side of the appellation, the Vernaccia di Oristano Riserva 2001 is all the way down the oxidative rabbit hole.  It is way more intense in its savory, herbaceous, salty nuttiness and textured, oily mouthfeel.  The full on oxidative funk is pure and beautiful, but where this wine diverts from, say, a richer Sherry or a Jaune, is the unmistakably Sardinian tropical/lemon-y/orange peel-y fruit nuances that surround said funk.

But, oh the saltiness...

The classic pairing here is anything with Bottarga, the rich, intensely salty/umami cured fish roe the region is famous for, but anything that you'd be happy pairing a richer form of Sherry with will also work beautifully.

Not to pile on, but Carta also produces two rich, herbaceous and wildly drinkable Vermouths as well if you're into that sort of thing...