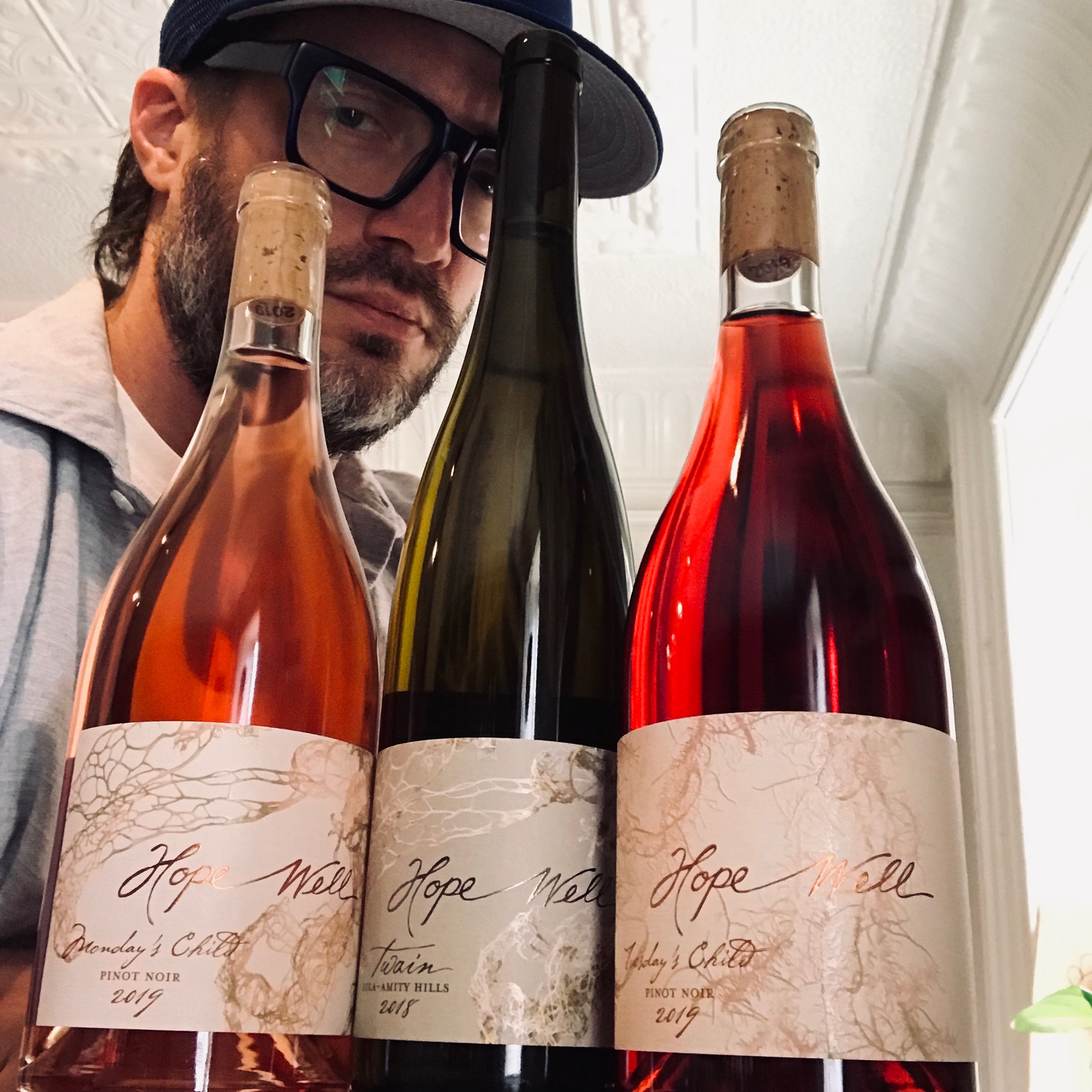 Mimi Casteel's Hope Well winery has been among one of the many tiny-production wineries from Oregon that we love here at MCF.  I first wrote about her back in September, and you can go to our website to read that one, if you want to know more.

I dig what Mimi has going on so many levels.  She grew up in the Willamette Valley wine scene (her parents founded Bethel Heights), and, within about 83 seconds of first meeting her, it becomes apparent that she doesn't just 'know a lot' about it, she's interwoven with it...her connection to the land, its wildlife and her vineyards just kind of flows off of her.

While her commitment to Regenerative Farming is met with all manner of dissent among her peers (I've heard it from some of them first hand), I can say that she's got me fully on board with it.

I'm on board with it, not only due to the way she can make your head spin with her otherworldly knowledge of every aspect from the biochemistry on up, but even more so because of what ends up in the glass.

Let's face it, there are plenty of people out there who have compelling stories, or unique theories, or can talk you into buying into whatever they're selling and, as cool and groundbreaking as it sounds, whether it's wine or food or nutritional supplements or mattresses, etc., in the end, you're most often left feeling like you got duped.

(Hopefully never by wine merchants who plaster pictures themselves making stupid faces in their newsletters, though...)

It's the exact opposite with Mimi's wines - she's got a lot of very intriguing, groundbreaking ideas, next-level knowledge of farming, and all the passion that you can pack into a human body, but, ultimately, it's her wines that speak the loudest.

So, when three of her new releases arrived yesterday, I don't even know if had signed for the delivery yet before I ran to pull corks on one of each to give them a chance to 'talk'.

The first is a white called Twain, a blend of two of the region's longtime white workhorses, Riesling and Chardonnay (in her words, a once-in-a-lifetime pairing of polar opposites) that, in the 24 hours I've had it open, has proven to be quite the shape-shifter.  At first, it's rather Alsatian in character, showing the more developed savory profile to go along with the nuttier elements from the Chardonnay and a hint of off-dryness implied by the otherwise steely, bone-dry Riesling.  After about an hour, a bit of that nice smoky/petrol-y thing began to appear.

Day two, however, and the wine is alive.  It's bright, racy, flowery, citric and has a stony textural element that you just can't turn away from.  As always, what may sound like a rather foursquare example of Willamette white is transformed something fierce by my gal Mimi.

This is screaming for a cheese board or some spicy Asian fare.

Then, we have 'The Children', another super cool idea that, again, took some serious courage on her part to pursue.  After a tricky Summer, where humidity led to the constant threat of disease to the crop, and a rainy spell around harvest threw another curve, Mimi and crew were rewarded for their patience with a cool and dry spell, which allowed the fruit to achieve the kind of maturity and complexity that's the stuff of dreams in Pinot Noir.

However, after sampling some the berries from across the vineyards, she was convinced that, rather than just be happy with producing a great Pinot, there had to be a way to truly 'capture the dimensionality' of what they had.

Enter the three Children of 2019, two of which, Monday's Child and Tuesday's Child, are what's on offer today.

Both are Rosé of Pinot Noir, and both are plain fabulous.

Monday's Child spent less than 24 hours on the skins and went to press cold.  The result is a fresh, brilliantly aromatic and flowery/herbaceous Rosé of PN.  It beams with the effusive qualities one looks for in a fresh Rosé, but there's a subtly serious and sophisticated streak running throughout - there's a lot 'gravity' to it, despite its frolic-y outward nature.

Tuesday's Child, on the other hand, spent 48 hours on the skins at ambient temps, and the result, again, is pure genius.  This is a 'deeply-colored rosé' that, in the glass, acts just as much the part of 'lightly-colored red' for me.  Whichever way you look at it, it's a wonderfully complex, refreshing and engaging wine, where the brambly/spicy aromatics, fruit driven texture and fresh acidity dominate, but, lurking at the edges, are the beautiful, telltale aromatics of a classic Willamette Pinot, letting you know very clearly what you're dealing with.

As of right now, I have to admit, Monday and Tuesday are in the running for my favorite releases of the year so far, and a lot of it has to do with how good they were, like the Twain, on day two.  Not only were they both still going strong, but they complexities of each had blossomed even further, suggesting just how much there is to look forward to with both of these in the coming months/years.

'This was not a Rosé experiment,' Mimi maintains.  'This was about pulling perfect ripeness through a prism to see what was on the other side.'

So far, that prism is dazzling and enlightening and, yet again, her instincts have rewarded her...

'The Third Child yet rests', according to her notes, but it will be the release of the fully red Pinot Noir.

I suppose that it goes without saying that I, for one, cannot wait to meet the final sister...