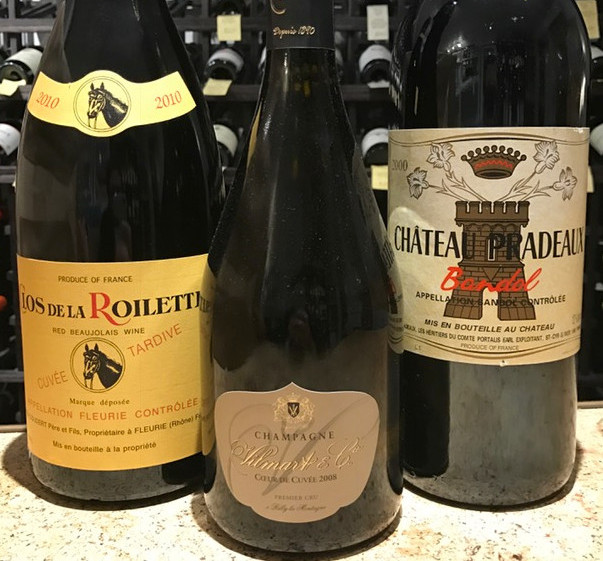 This is a really fun offer, and not the type that I get to do all that often.

A lot of times, new customers will walk in the door and be surprised to not see many older and/or higher-end wines sitting on my shelves.

The reason for that is quite simple.

Most of the time, when I receive older or very limited-release/collectible items, I send a few personal emails and they're gone before they hit the shelves.

But occasionally, they do remain available long enough to make it to a general newsletter like this one, and that's a cool thing.

There area a few reasons for that -

1) I very occasionally bury things that I really like in the cellar on purpose, for the purpose of selling sometime down the road, as is the case with the Roilette Tardive 2010.

2) I sometimes bury things in the cellar not on purpose, and then I forget about them, as is the case with the Coeur de Cuvée 2008.

3) A wine comes in during a busy time like the holidays and I just put it on the shelf, but somehow we forget to point it out to people, so it survives and now I get to focus on it, as is the case with the Pradeaux Bandol 2000.

Eventually I remember them.  In the case of these three wines, I actually drank them all in the relatively recent past, so they were at the top of my mind, and I finally got around to drawing this offer up!

Clos de la Roilette Fleurie Cuvée Tardive 2010 1.5L $99
When the 750s of this wine hit the market, not too long after I first opened the shop, I loved them, but thought that they'd be really spectacular sometime down the line.  The ripe 2009s from Beaujolais had just come and gone to much hype, but most Beaujolais traditionalists like myself were really happy with the very linear, very taut 2010s.  These magnums were actually released by the importer a lot later on, almost a year later if I remember correctly.  Being that the 2010s were kind of old news at that point, and that I loved the wine so much, I decided that I was in no rush to sell them.  Over the last 7 years, I've cracked one twice, only to see that they were still SUPER young - very tight, with a very firm, acid-driven backbone and a grippy, tannic finish.  Finally, though, a few weeks ago, we went to visit good friends in the Berkshires and I brought another one along.  Dinner that night was, rather fortuitously, roast chicken, and I cracked it with a lot of anticipation.  MAN, was it singing!  The HIGHLY perfumed nose was a full bouquet of floral tones and dark, animale notes that Roilette is known for.  On the palate, that story continued - the darker, wilder side of Gamay (or should I say 'Gamey') was on full display.  After a couple of hours, it went into a bit of a weird, kind of plummy stage.  It was still delicious, but it wasn't as vigourous.  An hour or so after that, it began to shed the plummy-ness and refocus itself.  At that point, some almost Vosne-like spicy/exotic things began to emerge.  No matter what point you catch it in, it's really good, but my advice is pop and serve, as that was by far my favorite role it played.

Chateau Pradeaux Bandol 2000 1.5L $189
Here we have another super-delicious, animale magnum, but now we're in Provence, and talking about Pradeaux's classic expression of this most traditional of Provençal reds.  I'll try to be brief with this one, as the above was a little long-winded, I know.  We had this on New Year's Eve (my Mom's birthday) with Bœuf Bourguignon, which was about as perfect a pairing on a cold night with a fire in the fireplace as you can think of.  It was fully mature, with dark fruits, wild herbs and a pungent, feral side that was just perfect.  As it was open, it became a lot more elegant and nuanced, but, since I love the animale, I would again recommend a pop and serve for this one.  Maybe with some lamb...scratch that...definitely with some lamb.

Vilmart Coeur de Cuvée 2008 $145
So here we have one of those highly sought-after, limited release items that came in and I kinda forgot about.  Vilmart's Coeur de Cuvée has become one of my favorite vintage Champagnes over the last decade, and there are many people who feel the same, which is why I usually have some thirsty people waiting to take it off my hands right away.  But, being that it was a CRAZY December here, it kinda slipped my mind.  When it came time to grab a bottle to take home for Christmas day, I said, 'Oh, the '08 Coeur de Cuvée!  How could I forget about that!'  So, on Christmas day, after presents were opened, and kids were napping, my wife, her parents and I took the opportunity to enjoy a little foie gras and I pulled the stopper on one of these.  I should point out that 2008 is an absolutely classic year for Champagne, and is easily my favorite vintage of late, with its precision, drive and aromatics.  This was one of those 'ugh, why did I open this bottle' situations.  Not because the wine wasn't good, but because it was SO GOOD, but also SO YOUNG...really just a baby.  The wine was as precise and taut and energetic as can be and, with each sip, all I kept thinking about was how good it will be sometime in the future.  My advice here?  Buy it and forget about it for at least 3-5.

NET Pricing
All of these wines are IN STOCK, but SUPER LIMITED.