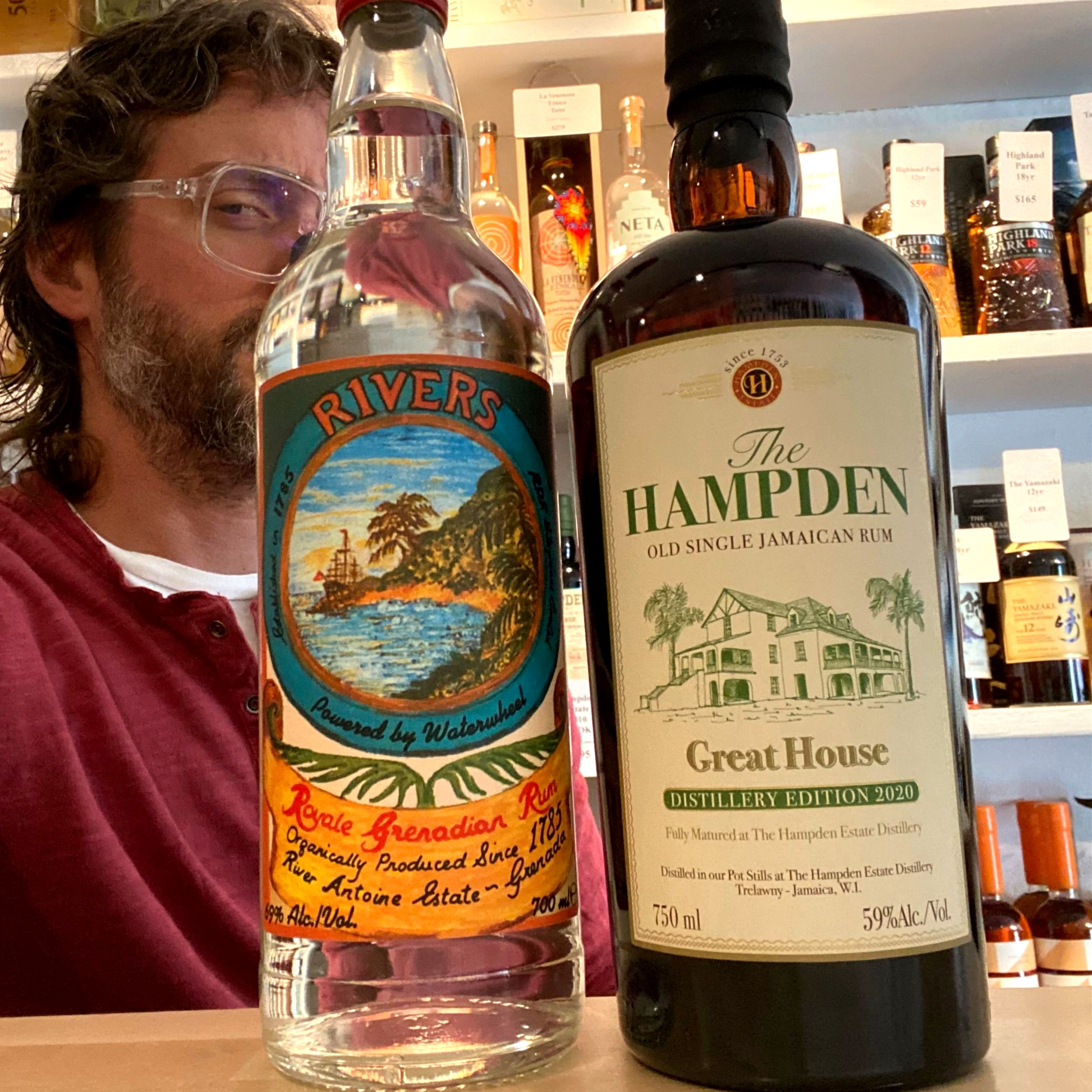 Over the last few weeks, I've been on a rum kick, specifically the 'stinky' rum, as my kids now call it.  (Or 'don't sit next to me if you're drinking that...', as my wife says.)

I'd wandered on the periphery of funky and/or ester-heavy rums for years, but never quite found a connection with them that would come anywhere close to single malt or mezcal or Armagnac, etc.  On the occasional warm night, with a good cube of ice, I found them quite compelling, but I wouldn't say that I ever really had a jones for them.

Richer, more polished ones like El Dorado or the ridiculously good Oloroso-aged Navazos Palazzi 2020 Edition were things I loved, but I had to be in the mood for the funky stuff.

However, with the arrival two weeks ago of two amazing, extremely small production rums (both of which I'm offering today), I guess you could say that my mood changed dramatically, and now the bottles of funksters that have sat on my home bar shelves for years are suddenly draining at an alarmingly faster rate.

So, today I thought I'd share with you two fabulous examples (one aged, one white), that have me feeling the funk like never before.

River Antoine Estate has existed on the NE Coast of Grenada in the Caribbean since 1785, and they still produce this character-packed Rivers Royale Grenadian white rum in basically the same way that they always have.  There's no electricity at the distillery.  The cane is cut by hand and crushed with a water mill.  The freshly pressed cane juice is concentrated by heating, followed by a 10 day fermentation.  After distillation in pot stills, two bottlings are released - one at 75.5% and a second at the 'flight proof' of 69%, for those looking to suitcase a few bottles back home, which used to be the only way to get it to the US.

It has never been exported until now, and had, thus, built up quite a mystique in the rum geek crowd, no doubt fed even more by how hard it was to obtain.

I know, it's always been about the barrel aging with rums, but, just like with Mezcals, I (and a growing number of others) find that as much as the barrel adds in terms of smoothness and richness, etc., it does come at the expense of the raw character, for better or worse.

This rich, fruity, pungent and extremely compelling rum is all about that raw character - expressing some Agricole-like elements, but then zipping into way funkier directions as the it progresses across your palate.  If you're not a hard-core 'overproof' person, I highly recommend being quite liberal with ice and/or water.  For me, though, the way each tiny sip screams across the palate, is what it's all about!

At the other end of the spectrum, we have signature rum from what is one of the most legendary names is the category - The Hampden Estate.

While it's probably too difficult to summarize all of the reasons why this Jamaican distiller is so revered, I'll say that the reasons are many, and they come in the form of each of the myriad single rums they produce.

They utilize a wide range of 'marques', or proprietary symbols or acronyms that designate the various production methods, ester count and ultimate flavor of each rum.

Once a year, they release their Hampden Great House Edition, the components of which vary from year to year, but it's always a fantastic snapshot of the Hampden style, and was traditionally only sold at the distillery gift shop.

This 2020 Great House is a blend of 80% 2013 OWH (OWH is Hampden's marque for their lightest-ester formula), with the other 20% being 2017 <>H (which is one of Hampden's most sought-after high-ester marques).  The result is a wonderful balance between rich, spicy, caramelized fruit and all the deep, rubbery, savory, metallic, ester-y complexity.  It's fabulously smooth, and gloriously textured, but not at the expense of all that character.

So, even though you and your 'stinky rum' may be exiled to a farther corner of the room by your family or friends, for me, it's totally worth it.

Also available from the Hampden Estate -