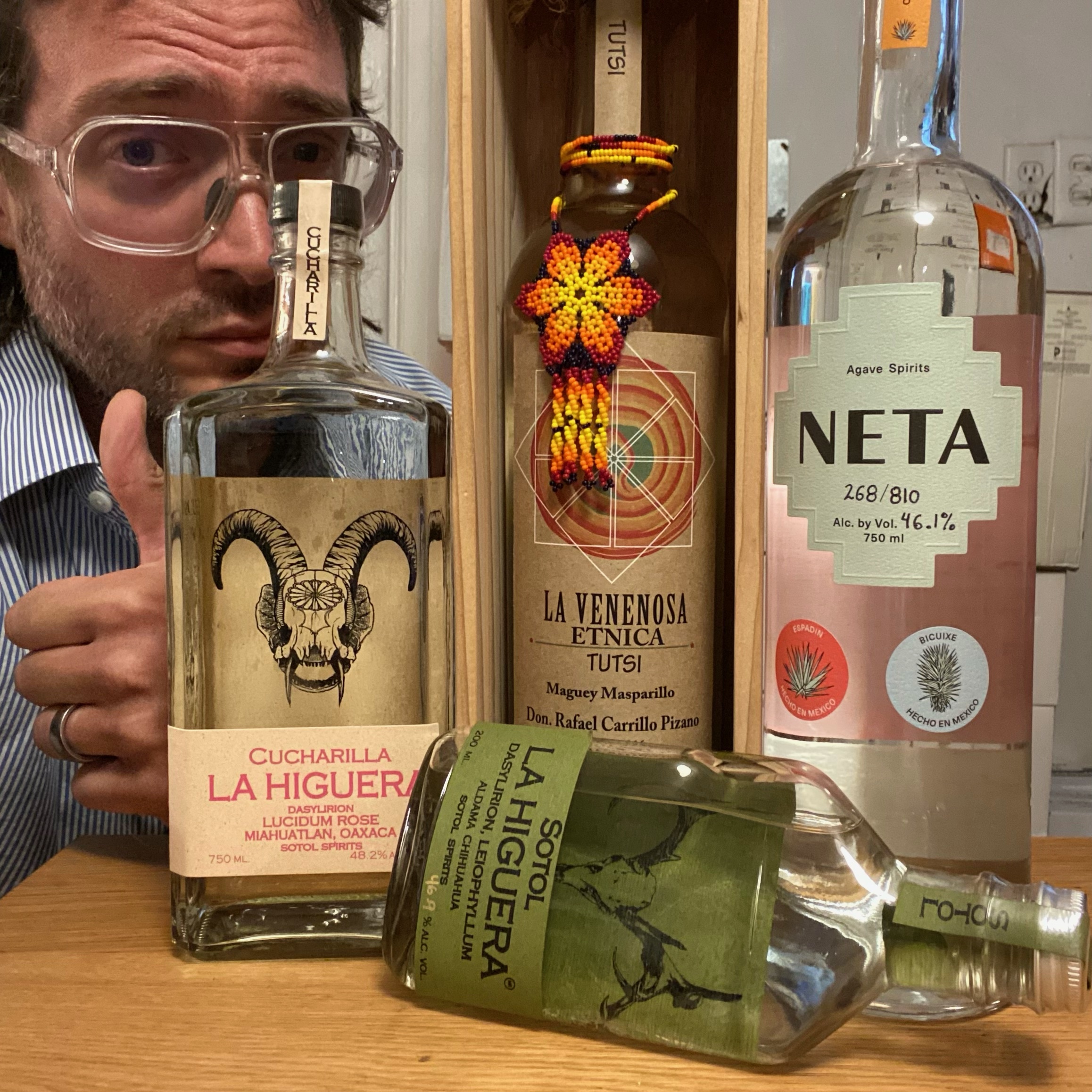 The Many Shades of Maguey

Last year, I made a video about Sotol, the Mexican spirit made by the plant of the same name, with importer Arik Torren of Fidencio Spirits (you can view it HERE) and I've wanted to send a more comprehensive offer for some of the other expressions of Mezcal ever since.

This week, I tasted the latest releases of micro-production, one-off Mezcals from the Neta project, and I decided it was time.

Mezcal is a term for anything distilled from the Agave plant (yes, technically Tequila is a type of Mezcal, but just one made entirely of Blue Agave in a specific region of Jalisco) or one of its relatives, like the Sotol plant.

Colloquially, though, it refers to spirits distilled from any of the dozens and dozens of cultivated or wild species of Maguey (the other name for Agave) that inhabit each sub-region of Oaxaca.

In spirit, though, what separates Mezcal from Tequila is the devotion to the individual species of Maguey and their respective terroirs.  Whereas Tequila is often prized for its age (time in barrel, though that is changing too) the finest versions of Mezcal mostly see no barrel time, so as not to obscure the singular character that arises from such attention to terroir.

Then, we have the outlier styles of Mezcal like Raicilla, which, while hard to define for a number of reasons, is incredibly delicious.  I say 'hard to define' because Raicilla has only recently begun to be recognized as an official style.  Before that, it was known basically as farmer's moonshine distilled from the wild, non-Blue agaves, mostly for private consumption or roadside sales.

It had been illegal for centuries, first outlawed by the Spanish and then kept on the sidelines by the dominance of Tequila in the region.  While it's been officially recognized to some extent since 2019, the micro/farmer-production nature of most Raicilla means that they are generally a) loaded with singular character but b) also rather expensive.

Today, I'd like to highlight three sets of products, one from each of the three categories here.

The world of agave-based spirits is, for me, the most exciting thing going on in spirits right now, offering a wine-world level of micro-expressions, each a result of place, variety and maker.

NETA is a project that serves to highlight the brilliance of small, family/farmer producers of Mezcal in the Miahuatlan area of South-Central Oaxaca.  They bring to us in the outside world a highly-curated selection of single-batch Mezcals that would likely otherwise never be known outside the region, and we're all very lucky for that...

This stunningly unique and delicious, tiny-production 'ensamble' of Espadin y Bicuixe, made by Cándido García Cruz in the village of Logoche, is elegant, delicately fruity and shows a kiss of fragrant smokiness.  810 bottles produced.

This is another 'ensamble' of the Barril and Mexicanito varieties made by Hermógenes García Vásquez and Jorge Aquino Vásquez in the village of Logoche.  Intensely mineral and viscous, with beautifully elegant fruit and subtly savory notes, it's proof that Mezcal isn't always 'smoky'.  Absolutely beautiful.  522 bottles produced.

This outrageously delicious NYC exclusive is made by Tomás Garcia Cruz and his sons from 200 piñas of seed-cultivated Tobalá planted in 2014.  It's sublimely elegant, medium-textured and shows a spectrum of delicate fruit notes that are caressed by a subtle, sweet smokiness.  'Lights Out' only sort of sums it up.  226 bottles produced (!!).

The Sotols of La Higuera need little intro if you've been a longtime reader of this newsletter or you're a local walk-in-er.  They're each made of a different variety of the Sotol (Dasilyrion) plant.  However, in the video, I'd promised the release of a tiny production special bottling made from the Dasilyrion Lucidum Rose variety that's native to the aforementioned area of Miahuatlan (versus Chihuahua, where their other Sotol originate).  It was worth the wait...

A personal favorite of mine, the Leiophyllum is all about ulta-intense minerality and floral eletments with great underlying savory/meaty nuance lurking throughout.

The Cedro combines the mineral/floral/meaty intensity of the Leiophyllum with the soaring smokiness of the Wheeleri.  A nice all-around expression, if you will...

This is the special, one-off bottling from Higuera made from the Lucidum Rose variety (aka Cucharilla) and it's pretty mind-bending stuff.  It's outrageously floral, but not in the 'perfume-y' way...it's much more edgy and untamed.  That wildness translates to the textured and mineral-packed palate, where nice, elegant fruit notes are anchored by a deep, almost ester-Rum-like pungency.  Spectacular.

Raicilla, the 'outlaw' agave spirit, is slowly making its way towards broad legitimacy, thanks in no small part to projects like La Venenosa.  Given the fact that many Mexicans still regard Raicilla as something to be dubious of, it may take a while, but these two outrageously delicious examples will hopefully open your eyes to the potential of it.  In nearly identical fashion to what the Neta people are doing, La Venenosa was created by chef Esteban Morales to introduce the brilliance of these local gems to the world.  Each is made by a different mezcalero, from different species of agave and from different regions.

Made from the Inaquidens (or Bruto) varietal of Agave, by master Taberenero Don Luis Contreras in the village of Manzanilla de la Paz, the Tigre has a wonderfully fruity profile that's accentuated by peppery/herbaceous nuances over an intensely mineral core.  Just 390 bottles produced annually.

The Etnica Line is an extension of the La Venenosa line of raicillas that serves as a platform to bring agave spirits from indigenous ethnic groups to the market.  This gorgeously fruity, fragrant and mineral example is from the Huichol people in northwest Jalisco.  Tutsi (the local name for Raicilla) was lost for about 25 years here, and there is currently only one practicing producer left.  It's made entirely from the indigenous, wild maguey Masparillo (2016 harvest), and, with just 60(!) bottles produced annually, is extremely rare.