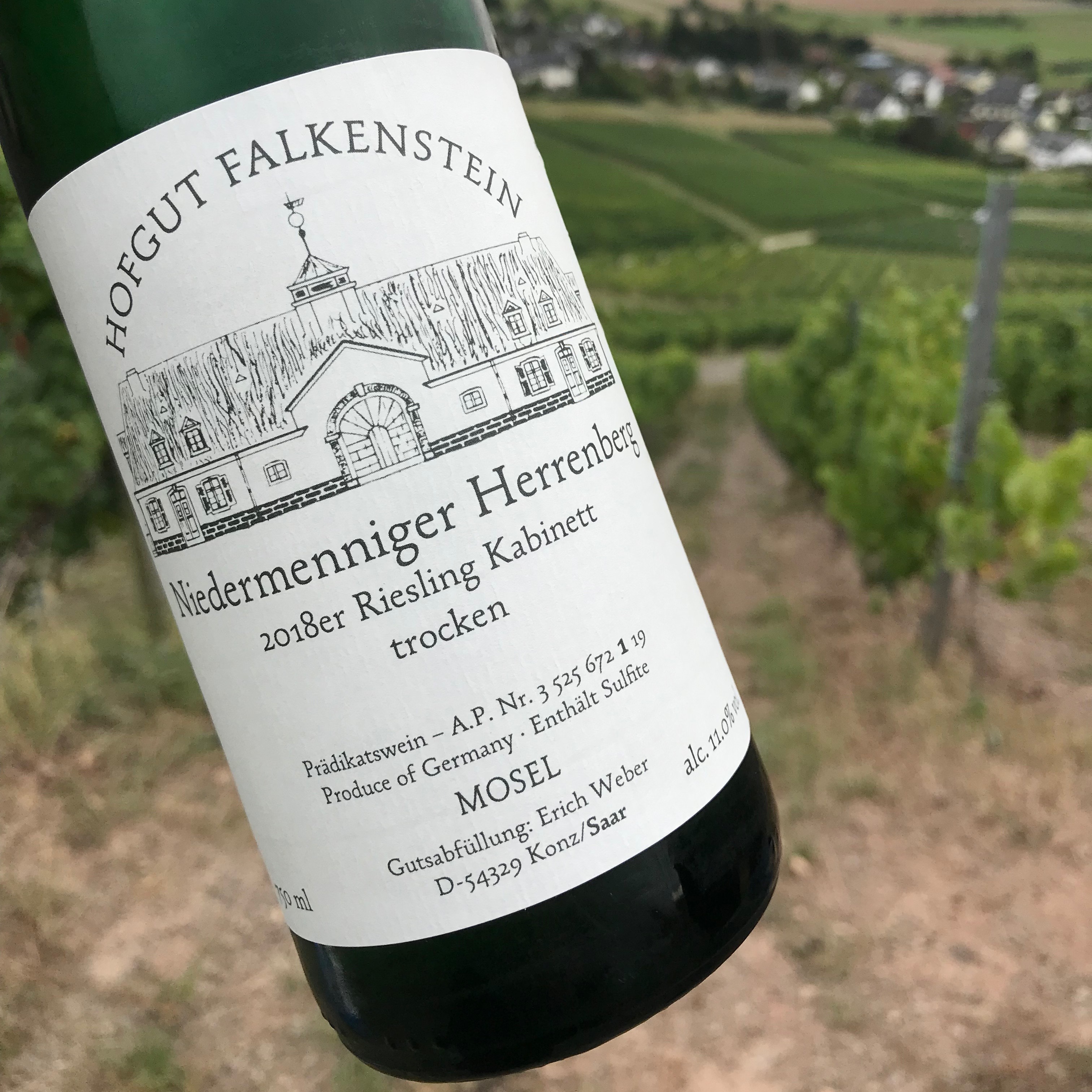 I just got back from a whirlwind trip to Italy that also included a few visits in France and Germany at the tail end.  Over the next few weeks I hope to highlight each of the winemakers we visited.

Everyone we met with is doing absolutely extraordinary things right now and I intend to do my best to make sure you understand just how highly I think of all of them.

We’ll start in Germany with Hofgut Falkenstein because a) the wines are about to land and, b) after meeting with Erich and Johannes Weber, and Lars Carlberg (their former importer who's now a member of the Falkenstein team), I feel even more strongly about just how special of a winery it is.

Over the last decade, Hofgut Falkenstein has become one of the most fiercely sought producers of Mosel (Saar) Riesling on the market.

They produce Riesling, Weissburgunder and a bit of Pinot Noir made in tiny quantities in a fiercely traditional manner that accentuates the beautiful freshness and acidity that, for the purist, represent some of the most authentic examples left on the market.

There’s simply no comparison when it comes to the bracing, focused Falkenstein style, and there are only a few other producers out there who’re still making them this way.

We met the team after a morning flight from Sicily and a drive from Frankfurt - they were preparing themselves for the harvest, which they said would likely be in the next few days.

We chatted a bit with Erich and then he left to get back to work preparing the winery for the harvest.

After pouring us a glass of the Weissburgunder Spatlese Trocken from the Herrenberg vineyard, Johannes and Lars took us to the cellar...the beautifully dank, dark cellar that’s home to the gloriously old casks, which were being prepped to receive their juice.

All the magic happens in these barrels and, according to Johannes, it's the reason for Falkenstein’s success.

Then it was off to see the Euchariusberg vineyard where we had a snack (Johannes's Mom had made us quiche with veggies from their garden) and tasted through the latest offerings.

As we strolled, Johannes was quick to point out how much less healthy the plot on the right side of the path, where pesticides and herbicides are used, appeared versus theirs on the left, which is farmed without them.

The contrast was indeed stark.

The 2018s, products of another simultaneously ripe, yet acidic vintage in the region, were so full of energy...so focused and so racy.

In other words, they’re classic Falkenstein.

Within each vineyard, they have sub plots they refer to as APs, each of which is vinified/aged in its own cask and bottled separately.  It can be a little confusing when looking at the label (it’s Riesling, after all), but that’s the way they’ve always done it…and since the doing has been so good...

Later, after a terrific dinner in Trier at his friend Yong's fantastic South Asian fusion restaurant called Yong Yong (where we were treated not only to the 10th of 15 bottles of his side-project Pet Nat, but a magnum of the 2013 Herrenberg Spatlese feinherb AP3), we headed back to Johannes’s family's house and sat in his kitchen, where we polished off a few more things, one of which was a bottle that he said had been open for about a month.

(Hot Tip: If you're a winemaker who wants to prove that your old-school, high-acid Rieslings possess great longevity, I recommend pouring a month-old bottle for your friends...it makes a salient point...)

Sometimes you meet people in life who, well, remind you of yourself, and the more Johannes talked, the more I found that to be the case.  He’s doing things on a small scale with the sole goal being to follow his convictions and deliver an honest product, all while competing in a field of bigger, shinier and more well-funded entities.

Knowing exactly how that all feels, and about the frustrations that can arise from it, and being someone who occasionally ‘vents’ such things to friends, just like Johannes had been, at a break in the conversation, I felt compelled to mention that ‘he sounds just like me…'

Anyway, the point is that team Falkenstein do things on their own terms, at their own scale, and produce wines of infinite clarity and precision that literally take you on a ride with every sip.

What’s their reward for doing this?

Why, selling every last bottle of every vintage, of course...

And, were they to make ten times the wine they currently do, we would all still probably be complaining about the size of our allocations...