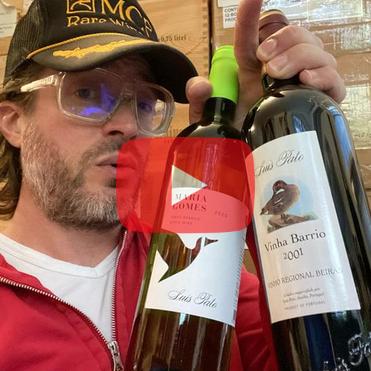 The Genius of Luis Pato

I've been pretty hot on it for a while, highlighting wines from producers like Sidonio de Sousa or Serradinha, but it wasn't until just recently that the wines of Luis Pato really got on my radar...

A month or so ago, I had in two vintages of Pato's Baga based reds in stock, but only in limited quantities.  Everyone who did nab some was quite smitten with them.  After all, there is so much about great Baga-based wines that is so very similar to great Barolo.

They're very firmly tannic when young, but, given the appropriate aging, they transform into wildly profound, nuanced wines of the highest order.  I'm quite confident that Portugal, at some point in the coming years, will be most famous for these wines, rather than, say, the fortified stuff.

So, I'm really happy to have the chance to re-offer some of his brilliant Baga, and to do it in the already mature setting of his 2001 Bairrada Vinha Barrio, which, much like Sidonio's 2005 Autor did a few years back, should serve as a perfect example of why you should be excited about the grape and the region.

What also makes Pato so brilliant, though, is his mastery of not just Baga, but of other grapes, too...white grapes...like Maria Gomes...which I'm sure everyone's heard of...

The Maria Gomes Branco 2020 is possibly the most unique, complex and flat-out delicious sub-$15 white wine I've had in the store...maybe ever...

But this floral, herbaceous, briny, nutty, textured, structured little gem is the kind of wine you won't believe is actually $14.  We ripped through our first drop in no time, and I can recall at least a half-dozen times where, when asked for a recommendation in the $30-50 range, I recommended the Maria Gomes.

Probably the best part about it was that I first tasted it when it was on day two, and there was no way I thought it had been open that long...and we continued to taste it on days three, four and five and there was still plenty to love, and different each time.

So, here you go...mature 'Portuguese Barolo' for $69 and an out-of-this-world value white for $14 from a producer who, I can say for certain, you're going to continue to hear about in this newsletter for years to come.