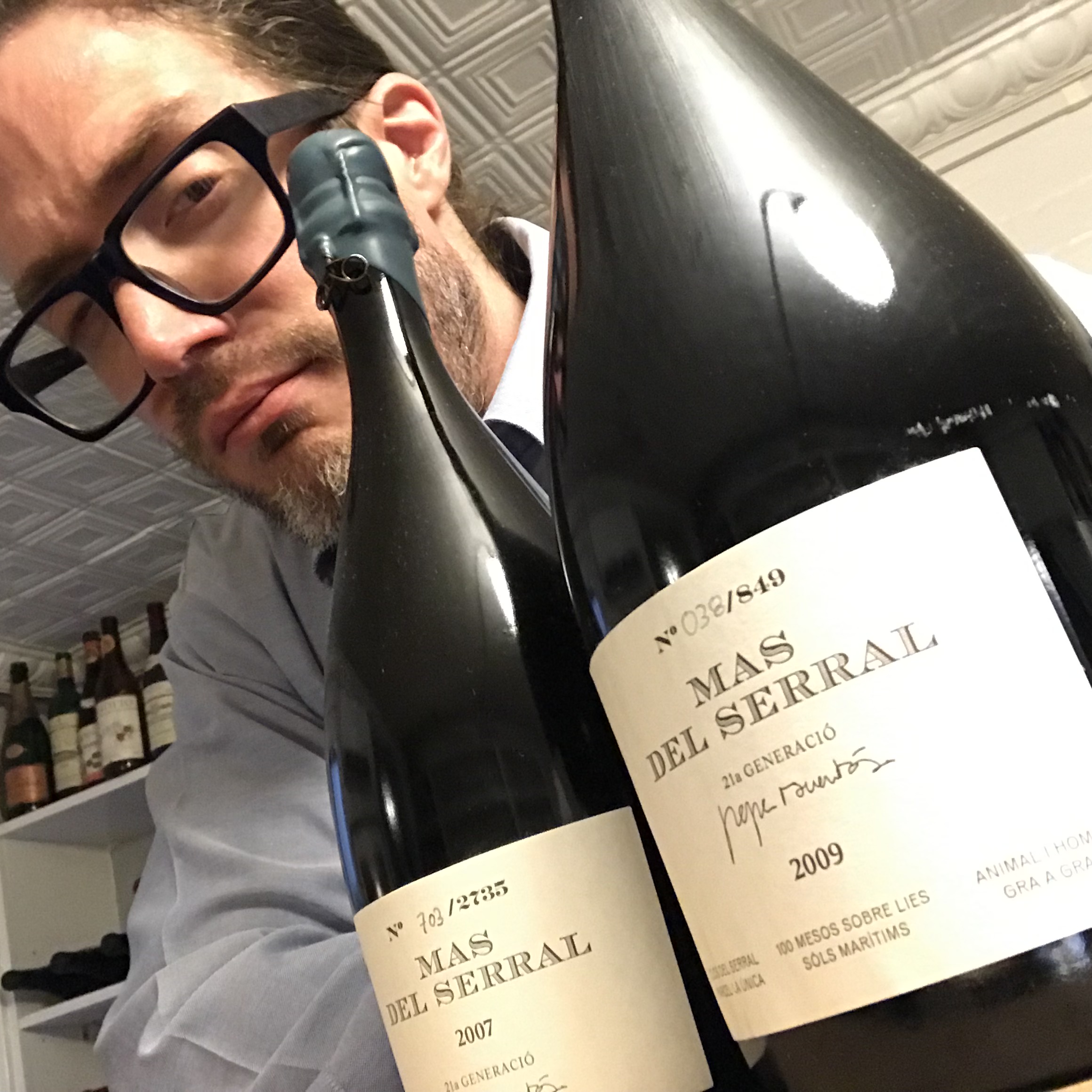 Back in October, when Pepe Raventos was in house to debut the 2009 Mas del Serral, he'd been of the mindset that it still needed a bit more time in bottle to come into its own.  He'd planned on waiting until Jan or Feb to release it.

However, all of you who attended expressed such enthusiasm for it (and the amazingly wide-open 2007) that he decided to let me have a tiny bit of the magnum-only bottles as an early exclusive.

So, they are arriving at the shop very soon, perhaps just in time for some of you to enjoy for the holidays.

After the tasting, Pepe, me, Steven (my rep with his importer), and a couple other guys went out for sushi (well, for oysters and bubbly, first...and then for sushi).

All night, one of the recurring jokes revolved around one of Pepe's numerous catch phrases...this one being 'ah, we've had plenty of sweet with the Champagne, now we'll have something mineral...'

The 'mineral' of course being any of his wines.

While he's mostly being a wise guy when he says it, he does have a point.  His sparkling wines are as focused, mineral and edgy as any bubbly you'll find on the market.

But, today I thought it would be a fun tie-in, because I also have three really lovely Champagnes in the shop right now that are some of the last remaining, sub-$100 releases from the benchmark 2008 vintage, one that's known for its structure, clarity, precision and...minerals.

So, some focused, mineral bubbles for your drinking pleasure...

The 2007 Mas del Serral, which was already a mega lees-y wine when it first arrived two years ago, has broadened out even more, showing even more of that wonderful, nutty, lees-y character over the rigid, mineral backbone.  The savory, chiseled finish keeps it racy and exciting.

The 2009, on the other hand, is an even more precise and elegant wine at the moment and, while it should put on plenty of weight in the coming years, it currently offers a wonderful counterpoint to the rich, savory 2007.

I truly believe that Mas del Serral is a legendary wine in the making, and that, sometime in the not-too-distant future, Pepe will have achieved his goal of Penedes being considered on par with Champagne as the other great region for sparkling wine.  And, when that happens, I believe he'll have done it largely on the strength of this wine.

When we asked Pepe why he only bottled it in magnum, his somewhat rambling response seemed to amount to, 'It was harvest and I got distracted...'

When you're Pepe, you get to do such things...

Of all the great vintages in any region that I've experienced, so far 2008 in Champagne is one of the few where I'd almost say, 'if it says 2008, it's going to be good.'

Of course, there are always exceptions to the rule, but in all honesty, every 2008 that I've tasted from any of the producers that I like, has been, at the very least, very good.

It just so happens that I happen to have three gorgeous and very fairly priced 2008s at the shop right now, and, since 2008s at the non-top tier aren't going to hang around forever, why not, right?

The entire production of the Blanc de Blancs d'Aÿ from Gaston-Chiquet was declared a vintage for the first time in 2008, and, once you've had a taste, it's pretty easy to see why.  To put it simply, this is very special stuff...especially for the price!  What I love about the 2008 vintage as a whole, is the linear, focused and structured nature of it, and when you're dealing with wines primarily (or in this case, entirely) made of Chardonnay, those elements are only accentuated.  With this '08 d'Aÿ, you're dealing with a precise, aromatic bubbly that's also showing incredible elegance and fabulous clarity.  As the bottle's open, the wonderfully complex development (thanks to 10 years on the lees), really begins to emerge.  If anything survives this offer, I'm certainly putting a few aside for myself!  I mean, 2008 Grand Cru BdB for $59?!?!  Do it!

Saint Chamant's vintage Blanc de Blancs is another fantastic, all-Chardonnay value that consistently delivers a whole lot of quality for the money.  It's a richer, broader expression, showing the weight and breadth that Chardonnay is capable of, and it's a wonderful counterpoint to the Gaston-Chiquet's elegance.  The nuttiness at the edges makes it a great option for fuller flavors on the table...of which there are plenty this time of year.  Through it all, though, the structure and focus of '08 definitely shines through.

The vintage Brut from Billecart has always been a sleeper hit, but this 2008 (which is Extra Brut for the first time) is easily the best one I can recall.  Seriously.  The lean and mean Billecart style is even higher-pitched with the lower dosage and the awesome clarity of 2008.  Even though it's predominantly Pinot Noir (65% PN, 35% Chard), it still screams across the palate with fantastic aromatics and a lovely, savory minerality throughout.  So, so very delicious...