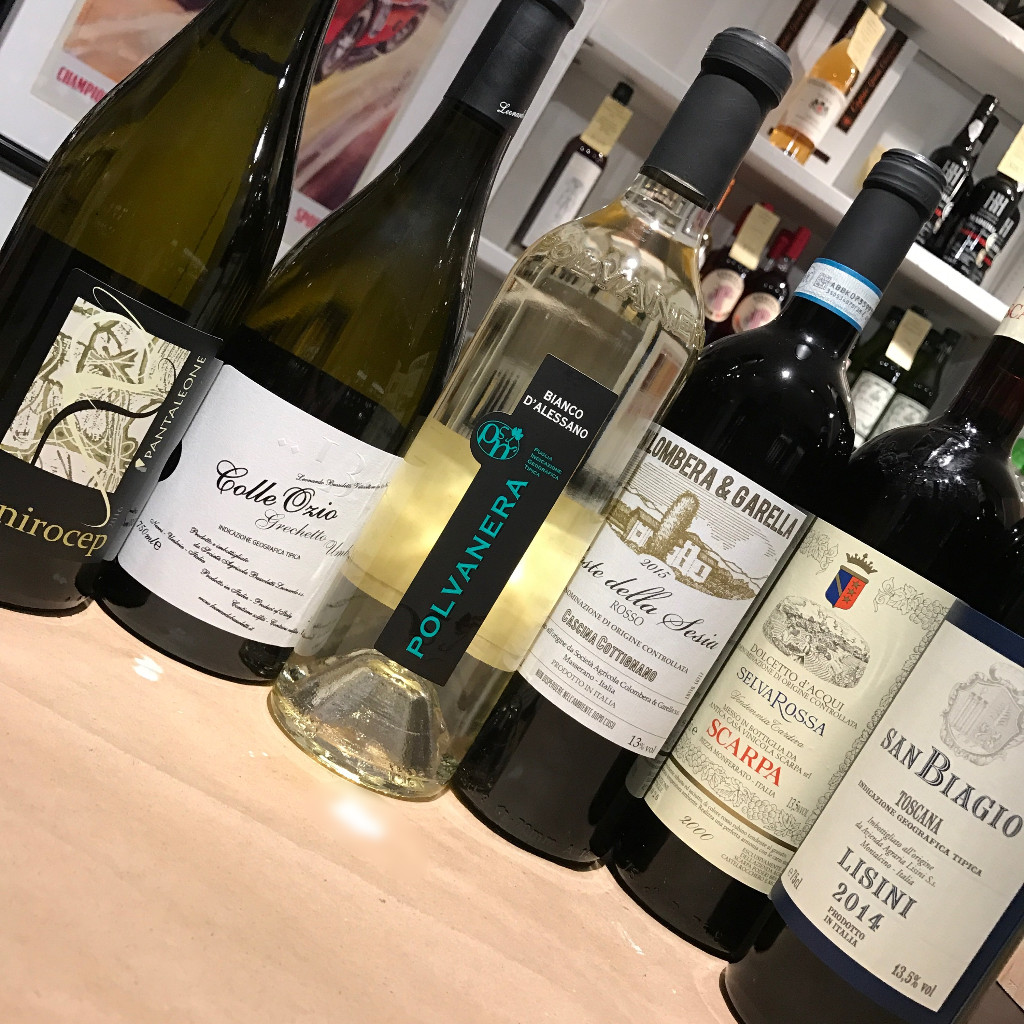 I've been pounding the rare and collectibles so hard lately, that sometimes it's easy to forget the great labels staring back at me from the shelf.

I walked in this morning and realized how many great, unique and fun wines we have in here right now (and I also realized it's been a while since I've highlighted a few).

So here are six great seasonal selections, screaming not to be overlooked - and I now realize that the six I selected are all Italian...

LEONARDO BUSSOLETTI GRECHETTO COLLE OZIO 2016 $23
Though it's a loaded question, with many caveats to a proper answer, if you asked me which white grapes, that are used for dry wines, have the most unrecognized/underappreciated potential for greatness, two that would be near the top are both from Central Italy.  One of which is definitely Umbria's native white Grechetto, and this is one of the better examples of why.  This Bussoletti 'Colle Ozio' shows the grape's ability to produce wines that are simultaneously fresh, weighty, structured and also uniquely complex.  This beauty has a highly aromatic nose, a palate that is crisp and citric, yet is also textured and laden with the wonderful 'cheesiness' (for me there's no other way to describe it) that you get from great Grechetto (and Pecorino).  I had this in stock a couple of months ago, and meant to highlight it in a newsletter, but it was so well-received that it was gone before I even had the chance!

PANTALEONE FALERIO PECORINO ONIROCEP 2016 $21
Continuing the discussion of underappreciated white grapes, the other Central Italian grape I was referencing above is Pecorino.  Sure, Emidio Pepe has recognized its greatness and is doing amazing things with it, but a) that's only one producer and b) it's a very specific (and expensive) wine at that.  As with the above, this little gem from the Falerio DOC in Le Marche, makes as good a case as any, especially for the price.  It's bright, citric and incredibly linear with a surge of live-wire acidity on the finish that imparts tremendous life.  Grilled seafood all day!

POLVANERA BIANCO d'ALESSANO 2017 $20
Stylistically, this is a departure from the above two in that it's not as 'serious', but that's not to say it's not as good.  Hailing from Apulia, this very obscure grape (I'll admit I'd not even heard of it until I tasted it) yields a super-light, super-fresh, bright, flowery and wildly chuggable white that is screaming for warm days and light snacks.  There's also just something about a clear bottle that makes the wine seem extra thirst-quenching.

LISINI SAN BIAGGIO ROSSO 2014 $19
From underappreciated grapes, we now move on to underappreciated vintages with Lisini's lively 2014 San Biagio Rosso.  This is Lisini's forgotten wine in the lineup, their fresh, stainless-steel raised IGT Sangiovese (100%) that offers a ton of classic, iron-y/mineral-laden dark Tuscan fruit for the price.  Even though it's a 'fresh' wine, it's impressively well-stuffed.  It's also a pretty good example as to why you should never dismiss a vintage out of hand, as many are likely to do with 2014 in Tuscany...

COLOMBERA & GARELLA COSTA DELLA SESIA 2015 $21
Speaking of things that I forgot to write about, I have no idea how C&G's Costa della Sesia has made it this long.  I mean, 4 years ago, I was using all of my verbosity to extol the virtues of C&G's wines and now they're as hot as anything on the market coming out of Italy.  So even though I feel compelled to discuss how brilliantly aromatic, lively and high-toned this blend of Nebbiolo, Vespolina and Croatina is...many of you probably already know that!

SCARPA DOLCETTO d'ACQUI SELVAROSSA 2000 $25
It's been a while since I've hawked one of the obscure oldies from Scarpa, but today's offer seemed as good a place as any to include an 18-year-old, $25 bottle of Dolcetto.  The 2000 Selvarossa, from the lesser-known Dolcetto d'Acqui DOC, is, like many of the other oddballs that Scarpa has lying in their cellars, is a wonderfully expressive wine that shows, yet again, just how well these 'pizza wines' (as we designate them here in the US) can actually develop.  If you're expecting fruity, lively Dolcetto, this isn't for you, but if you want to experience the rusty, leafy, herbaceous wisdom of an old Piemontese wine without much pain to your wallet, well...andiamo!...