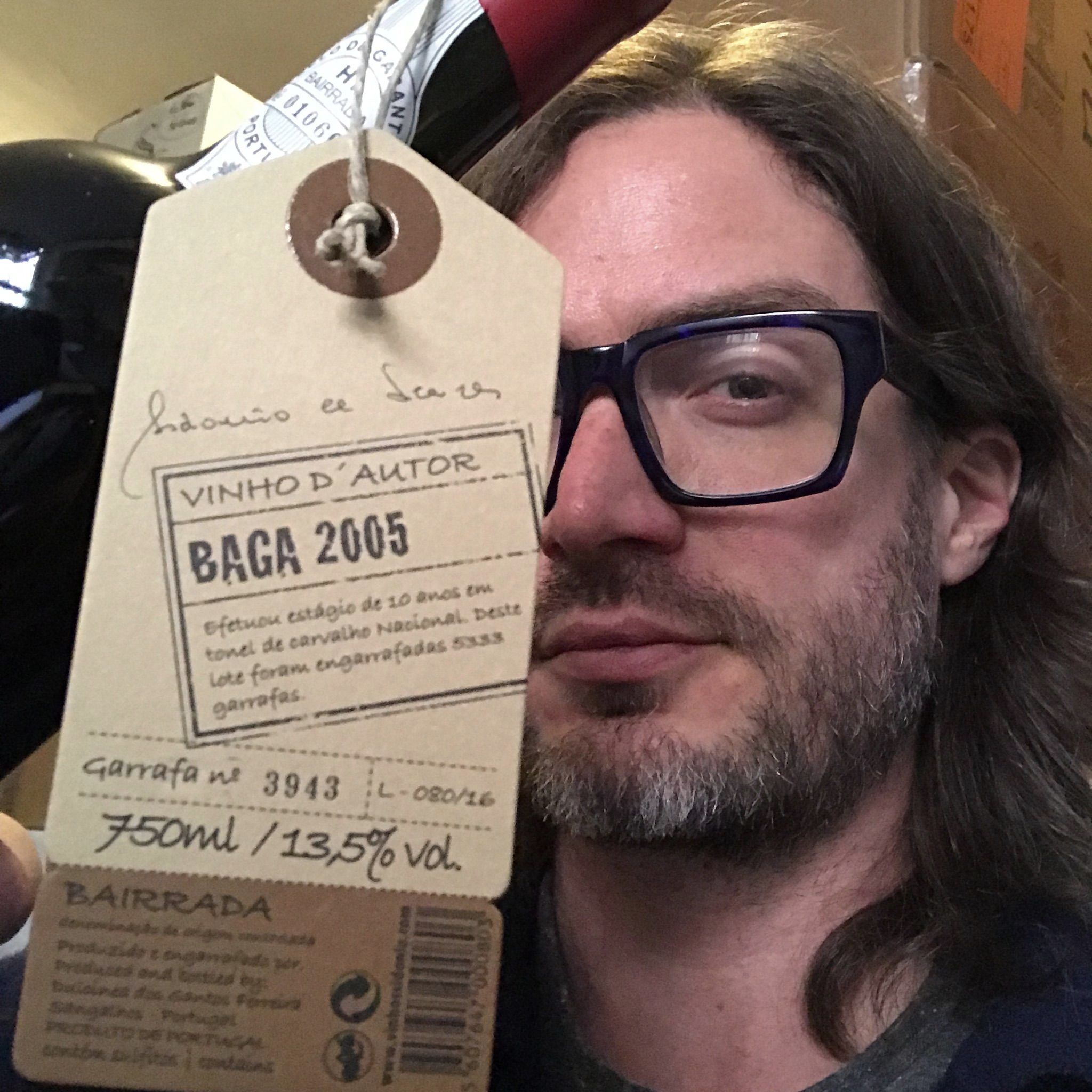 A lot of times I taste a wine, get really excited about it, and then sit down to write one of these up and find that I don't even know where to begin.

This is definitely one of those times.

Sometimes a wine has so much going on, flying in so many directions at once, that, yeah, it's hard to know where to begin when smelling/tasting it, let alone describing it.

I've been selling their other Baga-based wines in the shop for years now, and most of you locals have probably had at least one of them.  From the Brut Nature Sparkling Rose (of Baga) to the spicy little 'basic' Colheita to the brawny, powerful Garrafeira (in the thickest, heaviest 750ml bottle maybe ever), they've developed their own little following.

But Naama, my pal who, along with her husband Luis, import Sousa's wines, invited me to a dinner with the Sousa family a few months ago, and at this dinner, there was a 'sneak-peek' bottle of today's wine, the Bairrada Vinho d'Autor (rough translation: Winemaker's Selection) 2005.

It was easy to remember, not only because it was so delicious, but because it was in a completely different bottle than all of the others.  It had a bright-red wax capsule and no label, but rather a cardboard tag that was adhered to the bottle by said red wax.

I should backtrack a bit and point out that Baga is a tannic grape, for sure.  To me, it can kind of be summed up as Nebbiolo, with Aglianico's tannins, but with a more 'down and dirty' flavor profile, jacked up with that savory/umami thing that only wines from Iberia can deliver.

So, while I would have been perfectly happy to drink any of their wines with the lovely food we were enjoying, the Autor really stuck out.  It was miles more complex than the basic reds, but more open and refined than the still beastly Garrafeira.

I kept asking for more of the 'wax one'.

For months after that I kept asking Naama when 'the wax capsule one' was arriving.

Well, just over a week ago, she called and said, 'the wax capsule is here!  Should I drop by with it?'

A couple of days later, we were in the shop and, as usual, we were talking about the realities of running a small business with your spouse while living in the city with two young kids.  These conversations are usually long and often vent-y in nature.

Then she poured me a taste of the 'wax top' and it just kind of got quiet (other than the occasional sigh of approval) as we sniffed.

It's definitely a Baga, as its rugged, gaminess first indicates, but as you sit and 'listen', it begins to veer off into ten other directions at once.

Dark red fruits (with nice hints of that 'browning' at the edges that wines from Portugal are so good at expressing) lead into all manner of tobacco-y/animale/spice that then give way to a pungent, stony earth with a crazy mushroom-y/herbal/minty thing that fades out on the finish.

This is, of course, all before the brawny backbone of Baga tannins remind you of where you started out in the first place.

While it makes me long for some kind of salty, gamey stew right now, I also can't wait to see how this one evolves over the next decade plus.

There have been other editions of Autor produced over the years when there was extra fruit that didn't fit the Garrafeira profile, but was way too good for the younger wines, but there is a good reason that this one is SO singular.

It was comprised solely of the final harvest of what were the very oldest Baga vines at the estate before they were pulled up and replanted.  It was then vinified whole-cluster and set to age for TEN YEARS in 100+ year old Portuguese barriques.

Couple that with an extra 4 years in bottle already, and it's managed to turn a beast of a wine into what is without a doubt one of the most elegant and most unique expressions of this grape you will find on the market...period.

Hell, this is just one of the most unique wines on the market right now.

Special and scarce...but, above all, delicious...