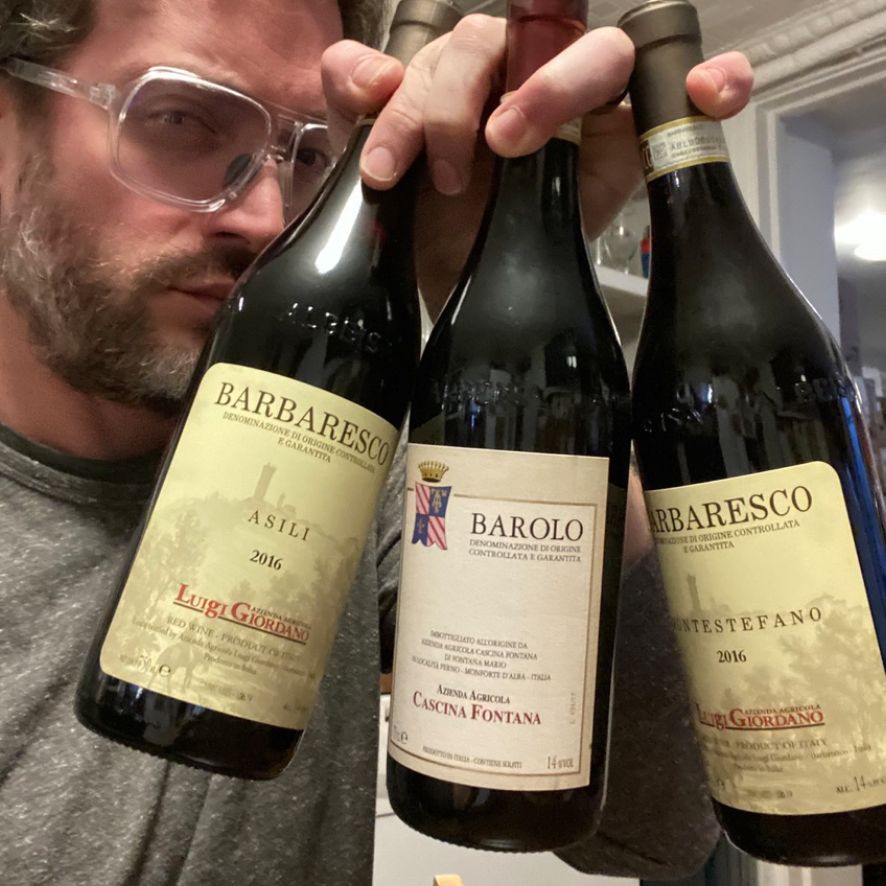 'Rustic' is a term that you hear a lot in wine.

Some people use it in a negative context, as in 'rough around the edges'.

Others, like me, use it in a positive context, as in 'genuine' or 'soulful'...something that in all its un-fussy forthrightness has a different kind of profound depth that a more disciplined or polished wine generally doesn't (or doesn't want to) express.

Like I said in the Cordero email, one isn't 'better' than the other...they're just different, and it comes down to preference.

Also, we can trace many of today's most famous, old-school, hard-core collector wines, especially the ones from Piedmont, back a decade or two and note where they were all generally referred to as a too 'rustic' by the cognoscenti.

So, with that in mind, let's discuss two producers from Piedmont that I believe are both a) rustic in the best sense of the word and b) destined to go from 'good but a bit rustic' to 'I've never bought any wine from you, but if you ever get (lists same 15 producers that every single wine collector on Earth wants), please let me know'.

...and, really, what could be better than that??

The 2016 Baroli have gotten all the hype, but unlike the last few 'big time' Barolo vintages (2010, 2013), the 2016s from Barbaresco are also fabulous.  The thing about the Barbaresco 2016s, though, was that, since they're generally released before Barolo, they were mostly earlier this year, during a time where they, quite understandably, got lost in the the chaos.  We certainly shouldn't forget about them, though.

Luigi Giordano's Barbaresco first appeared in this newsletter a few years back, and made quite a splash when they did.  These are decidedly old-school, fragrantly savory, elegant-but-firm expressions of Nebbiolo - in other words, they're classic Barbaresco, and these two 2016s, hailing from two of Barbaresco's most legendary crus, are just wonderful.

The Barbaresco Montestefano, as one would expect from this famous 'M' cru, shows a richer, darker, spicier/more exotic profile, especially when compared to the Asili.  Make no mistake, though, this is still a classic, elegant and restrained expression of Nebbiolo that, while showing well now, will get a lot more eloquent if given a few years in the cellar.

Then we have the aforementioned Barbaresco Asili, another wine from a Cru that needs no introduction, known for its sandy-soiled ability to express the delicate, floral, ineffably elegant side of Nebbiolo.  This version of Asili, in its current youthful form, is rather vigorous and intensely focused, though all the hallmarks of future glory are there - a firmly red-tinted sense of precision, clarity and aromatics is suspended over a firm, rustic (wink wink) backbone.

I cant wait to see what this one turns into.

Alongside these two gorgeous Barbaresco, I'm also really excited to offer the Barolo 2016 of Mario Fontana's Cascina Fontana - an drop-dead gorgeous example of old-school Barolo from a producer who I think is destined for greatness.

While these wines are still either off the radar of most critics or considered a bit 'rustic' by the ones who are aware of them, the last time I offered them in the newsletter, I got a really nice response from a friend/customer whom I'll refer to as 'A', that I've been selling traditional Barolo to for years.  He now lives in Piedmont and, in addition to making tiny amounts of his own Barolo, actually works with probably the most famous/sought-after of the 'used to be old-fashioned but is now a genius' producers from Barolo that you could think of.

He said, rather enthusiastically, that he'd been 'buying Mario's wines for years' and that he was so 'happy to see them in my newsletter'.

For me, endorsements couldn't carry more gravity than that.

So, here we have Mario's 2016 Barolo, a wine that I've been eagerly anticipating, to put it mildly.  It's a classic 'cuvée' bottling, utilizing fruit from all of Fontana's holdings in Villero, Mariondino and Giachini, each of which is vinified separately, and then assembled for aging in large Slavonian barrels.

This is a classic, robust, structured wine that, while not necessarily precocious, shows just about all of the hints and teases that I typically look for when judging a young, traditional Barolo's merits - brawn, aromatics, mineral firmness and balance.

Just for good measure, I also have a bit left of Mario's single cru Barolo Commune di Castiglione Falletto 2015, which is made only from the Villero and Mariondino fruit, meant to express his home area of Castiglione Falletto.  Being a 2015, it's a lot more rich and generous and, while it's easily got a couple of decades of life to live, it'd also represent a nice way to wade into the Fontana style in the near term.

In a world filled with overly polished phony stuff at nearly every turn, here's your chance to get a little 'rustic'...