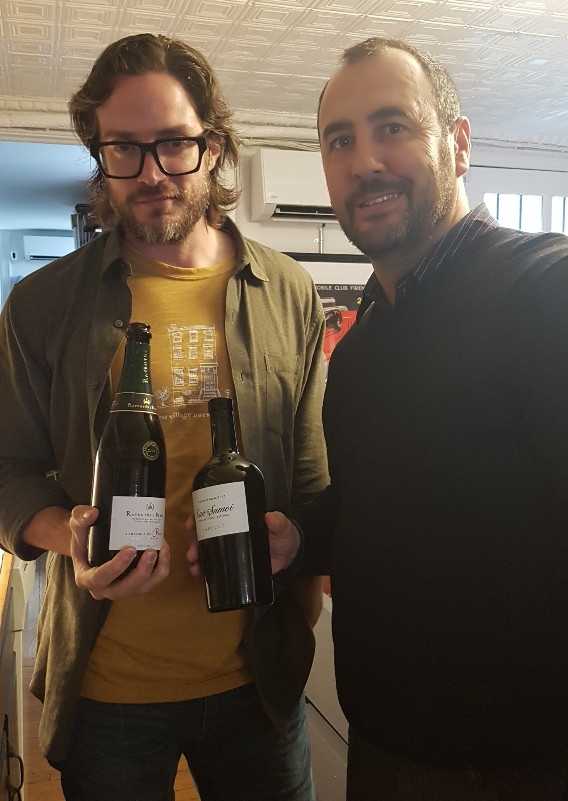 Back in the Fall, I wrote about Pepe Raventos' 'dream-realization' wine, the Mas del Serral, a single site sparkling wine from the 'Clos del Serral' that spent 100 months on its lees.

We went on to sell so much of it from that newsletter that we can now claim to be the biggest Mas del Serral seller in the world (no, seriously)...so we've got that going for us...

(there is a little bit left, too if you're interested)

A couple of days ago, Pepe's longtime friend, Francesc Escala, dropped in to pour me the wines from Can Sumoi, their new project that they've partnered in, as well as a new sparkler from the Raventos i Blanc stable.

And so...here I am, yet again, talking about the brilliance that's coming out of the Conca del Riu zone in Penedès.

First off, we have a white...a still white of Xarel-lo, the main local varietal - 'main' as in it's one of the most widely planted in the area, but also 'main' as in you mainly expect to see it as part of a sparkling wine.

Here we have it in a still white, and it's one of the coolest whites I've had lately.

It's very Penedès in flavor.  It has a wonderfully oily texture and a broad, supple mouthfeel, but the really interesting element here is the contrast between fresh, high, brightness and a very lovely lees-y nuttiness that is so characteristic of the region.

The best part might be the price tag, though.  You're getting a whole bunch of character for $19 here.

When I asked Francesc what his favorite setting is for this wine, he rattled off a few meals that it works with, but he ended his thought by saying that every Friday night, at the end of a long week, rather than cooking, he buys a selection of cheeses and he and his wife have a relaxing dinner of cheese and bread with a bottle of this.

That sounded just about perfect.

The other wine in the lineup is a relative newcomer to the Raventos i Blanc stable.  The Textures de Pedra 2013 is their idea of a native Blanc de Noirs (a non-pink sparkling wine made entirely of red grapes) or Blanc de Negres, as they label it.  It's made of Xarel-lo Vermill, Bastard Negre and Sumoll, all hailing from the stony Vinya mes Alta spot at the top of their hill.

Picture all of that wonderful Raventos lees-y intensity and racy energy, but with a decidedly richer, berry tinged profile.  Again, the contrast here is what really grabs your attention.  The heft and complexity suggest both a long aging life and also a wine that could easily accompany any range of cuisine.

A fatty, seasoned, slow-roasted roast pork shoulder sticks out very much in my mind.

I would actually amend Francesc's Friday night ritual slightly - a selection of great cheese, some crusty bread and a bottle of BOTH OF THESE WINES sounds absolutely perfect.

You should probably have another couple join you though...