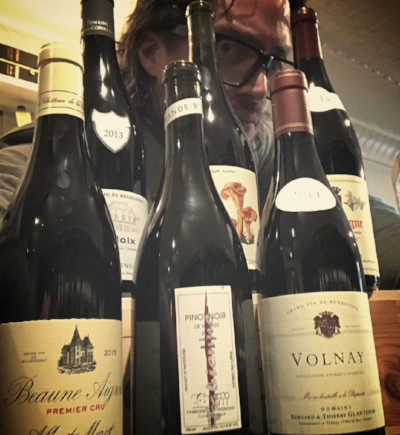 I'll admit, that sounds like a lot of 'ways', but I have six really fantastic Pinot Noirs in the medium-ish price point that I thought would make a great sixer (or twelver) that would also serve as a really cool 'lesson' in terroir, if you will.

Yes, four of them are from Burgundy, but those four alone offer glimpses into not only four different terroirs, but also three consecutive, very different, vintages.

So, while it may not be 'Six Pinots from Six Countries', or something like that...it will still be a really fun and delicious (mostly delicious), study in the world's most hallowed wine grape.

Also, here in NYC, it went from a muggy 80 degrees last week to a cool and crisp 50s just like that, so all of those visions of Fall-y cuisine are becoming realities, and, let's face it, while great Pinot is a 24/7/365 wine, it tastes best this time of year.

Edmond Cornu Ladoix VV 2013
2013 was a cool, wet (aka difficult) year in the Cote d'Or.  Which means that, aside from the top 30 names, people stay away from the wines for the most part.  Let's face it, nowhere is a 'difficult' vintage more difficult to sell than Burgundy, with the prices alone.  But, I wasn't always pessimistic about them.  In the early going, I thought that many showed a brilliant transparency and aromatic lift...then they closed down and got really grumpy.  They became stubborn and tightly wound, showing only little glimpses of pleasure contained by hard, angular edges.  Then, I began to taste a few and discovered that the lower and middle tier wines were beginning to turn a corner.  Case in point, this 2013 Ladoix VV from Edmond Cornu.  This is always a wine with a dark, pungent nature, but in this now-loosening 2013, the wine combines the copious dark fruit and deep earth that Ladoix is known for with a wonderful lift and vibrancy.  And, at $36, it's kind of a steal!

The Color Collector Passetoutgrain 2016
Yes, yes, here it is, what was, for me, the single most exciting wine I had on my shelves last year.  The second bottling of The Color Collector from Bethany Kimmel is here...well for a hot second, at least.  This time, instead of being 100% Gamay Noir, she's decided to go for the classic 'Passetoutgrain' style of Burgundy, blending Gamay and Pinot Noir together.  Yes it's still blazingly bright and kaleidoscopic...yet delicate and subtle...but also wildly engaging and lively...and yes it still has the most beautiful label in wine right now...and it's still made in minuscule quantities (around 10 cases came to NYC).  The main difference?  The addition of Pinot Noir just takes this nimble eloquence to another level of complexity and intrigue...    I swore that I'd never say these kinds of things, but...priority for The Color Collector will go to purchasers of the mixed six and 12 packs and will not be sold alone in qtys greater than two bottles.  At least for now...sorry....

Caves de Tilleuls (Fabienne Cottagnoud) Pinot Noir de Vetroz Grande Reserve 2007
Pinot Noir - great.  Swiss wines - cool.  Swiss Pinot Noir - great and cool.  Top-Notch Swiss Pinot Noir with 11 years of bottle age that is drinking fully mature and open, with stunning complexity for a fantastic price?  I'll let you add something following 'great and cool' to sum up that one.  Really, though...a few months ago, we had the non-Reserve bottling of the 2008 vintage of this wine and it was a huge hit.  So, when I had the chance to try the richer, darker, mintier, spicier, earthier, even more wide open and aromatically dazzling 2007 Reserve, I had high expectations.  Well, I guess that you know how it turned out.

Barthod Bougogne Rouge 2015
Do I need to say any more?  (For those of you unfamiliar with the brilliant Madame Barthod and her legendary 1ers Crus Chambolle Musigny, Madame Barthod is a brilliant producer of some of the most legendary 1ers Crus in Chambolle Musigny.)  As clamored for as those wines are (even at their $150-200 price points), it's her supple, pure, balanced and deceptively ageworthy Bourgogne 'Bons Batons' that might have the most loyal following of her lineup.  So, here it is, one of the great 'Bourgogne' bottlings from a future-classic vintage.  I sat on it for the last 6 months because I wasn't quite sure if I should let it all go to collectors, or I keep some for the greater email list.  You're welcome, greater email list...

Albert Morot Beaune 1er Cru Aigrots 2015
Some people throw around terms like 'rustic' and/or 'old fashioned' in the pejorative sense, as in 'those wines are a little too rustic for me', but, as most of you have probably figured out by now, I actually enjoy 'rustic' and 'old-fashioned' wines...as long as they're authentic and charming, that is.  And that's how I'd describe this Aigrots from Morot, authentic and charmingly, stubbornly old-fashioned.  The density and muscle of the 2015 vintage are on full display here, but in a very aromatic and focused setting.  It's almost as if you're drinking two different wines, as in between the muscular, up-front dark fruit and the firm, rustic backbone lies this space occupied by a highly aromatic and floral element that both bridges the gap and turns on the charm as well.  Ideally, you'd be drinking this wine in 15 years, but it's pretty darned good now, as well.

Bernard & Thierry Glantenay Volnay 2014
This is a producer I wasn't super familiar with, but Greg was very happy to see the bottle as we were tasting it, because he'd been very familiar with them during his past retail life in Paris.  (For those of you who don't know, prior to moving back stateside and joining us as manager, Greg managed a shop not all that dissimilar from ours in Paris).  Anyway, Volnay is known for producing the airiest, coolest and most fragrant reds in the Cote de Beaune.  2014 is a totally underappreciated vintage (which I've lamented many times) that yielded tremendously cool and airy wines, full of finesse and aromatic fireworks.  So...when we tasted this lovely AC Volnay from B&T Glantenay, we thought it was a great example of just why 2014 (and Volnay) is so good.  Its profile is bright red and it's polished, pure, supple and highly aromatic (I guess that's a theme), and, while it's no delicate flower (there's good texture and density here), it's still a Volnay through and through.


All wines available individually as well, but, as mentioned, for now the Color Collector is capped at 2 bottles per order when bought by itself.