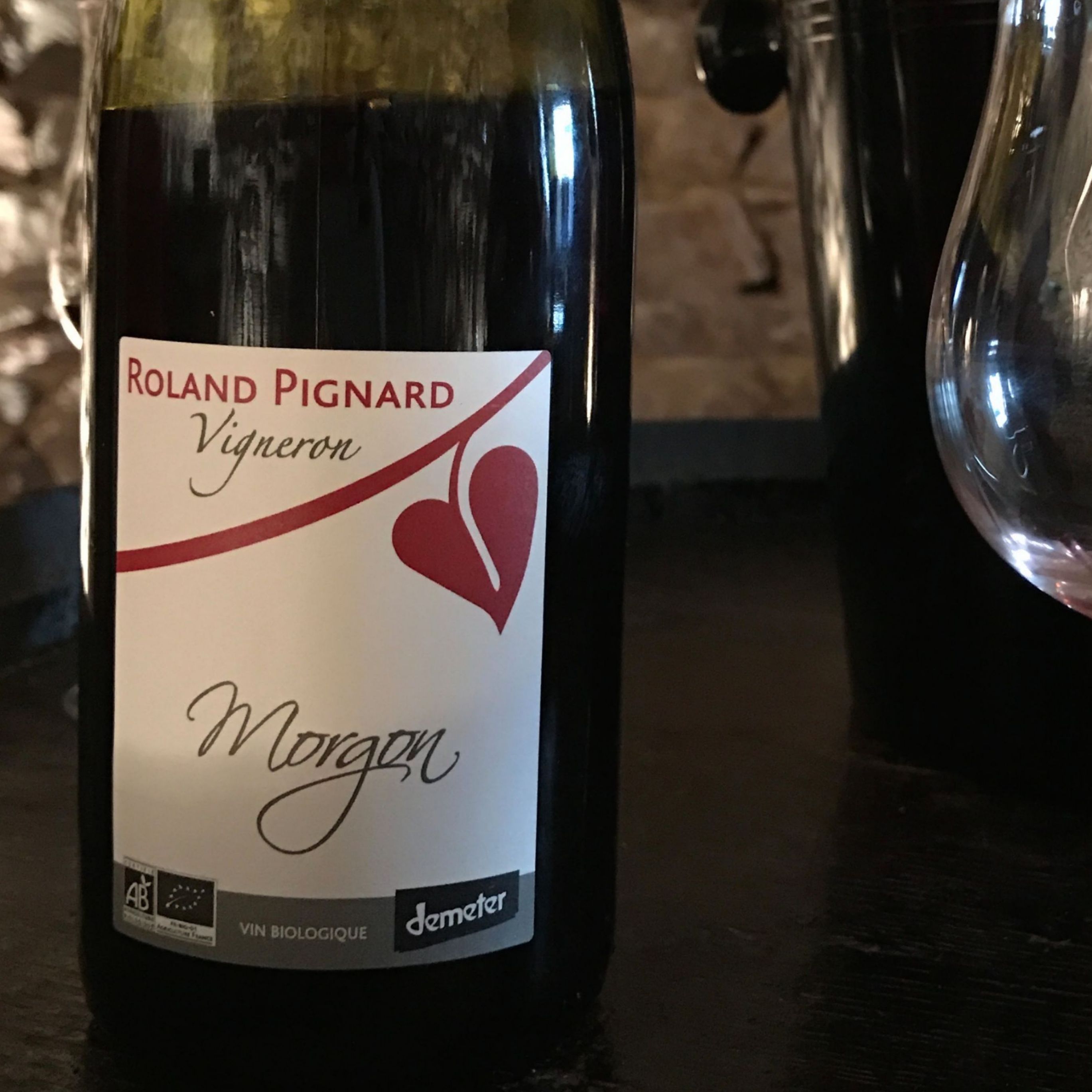 When I visited Roland Pignard with my buddies Mike and Jason (who import/distribute for him here in NYC) back in August of 2018, he was the fourth producer we'd seen in the first two and a half days of a trip where we basically hit the ground sprinting.

It started with an evening with Fabrice of Domaine Saint Pierre in Arbois, which is never a dull or low key, followed by a morning visit/whisky barrel sampling/lunch with Jean Arnaud at Michel Couvreur, which was a prelude to a very late night at l'Atelier du Cuisinier in Villié-Morgon where the number of bottles of Beaujolais consumed was, depending on who you're talking to, either something to brag about or to be a bit ashamed of.

(We also saw one famous local winemaker pass out, face flat on the table, but anyway...)

We'd just had a morning visit and lunch with Paul Henri Thillardon in Chenas and my attempted back-seat cat nap on the way to Pignard hadn't yielded any positive results, so to say I was feeling the effects of jet lag, lack of sleep, rich food an lots of wine would be putting it mildly.

That's how these trips go, though...you need to power through the first 2-3 days and get over the hump before your body adjusts.

Anyway, it'd actually been a few years since I'd sold any of Roland's wonderfully focused, structured and mineral-packed Morgon, for no other good reason than I just sometimes can't squeeze them in or, more likely, my supreme ability to get distracted had allowed them to fall off my radar.

We wandered into Pignard's impossibly quaint tasting cellar, and Roland, looking about as laid back as humanly possible, greeted us with a smile.

He had a glow of contentedness that you couldn't help but notice and we soon found out why.

We took seats and he began to pour his wines for us and, while doing so, his eyes wandered to the cellar door and the lawn outside.  He smiled and waived.  We turned to see his toddler grandchild gazing curiously inside to see what Grand-père was doing.  Roland's wife Joëlle beamed in the background.

I soon learned via translation that these 2016s we were tasting would be the final vintage he would produce.  Yes, it was 2018, but he was passing his holdings on to his protégé, Sandrine Henriot.  He helped her vinify the 2017 vintage in his cellar, and the 2018 harvest would be entirely hers.

So, knowing that these would be the final offerings of a man who, for almost 40 years, made his wines as honestly and admirably as one could imagine, the ease of manner made perfect sense - a life's work done, a grandchild to enjoy...

I could feel my own focus sharpen a bit as I dove in for a whiff, the privilege of tasting these final expressions suddenly felt more urgent.

Both wines undergo short carbonic macerations and the delightfully fresh and elegant Morgon is aged in cement, while the Morgon Cuvée Tradition spends one year in old barrique, giving it a sturdier, even more 'classic' structure.

In a way, his wines are perhaps the perfect compromise between the juicier carbonic and the firmer 'Burgundian' expression of Gamay, made even finer by the impossibly classic 2016 vintage.

These are quite the swan song for Roland and Joëlle, and, to make it even sweeter, I've also got a tiny bit of Morgon 2014 in magnum, as well, which, for me, may be 2016's only rival in the decade.

Even though it's been a few years, I'm glad to have them on the shelf, and share them all with you...

...if only for one final time.