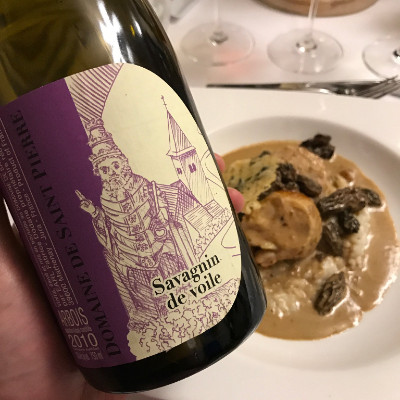 One of Life's Great Pairings

Obviously, there are many, many great combos in the food/wine world.

Most of them are multifaceted - i.e. there are many wines that go great with a steak or many different foods that are great with a glass of White Burgundy, let's say.

But there are others, like say Barolo/Barbaresco with white truffles shaved over a buttered linguine that are so perfect with each other that if you don't have them together, you're missing part of the bigger picture.

A few weeks ago, I was in France and while visiting Domaine Saint Pierre in the Jura (a producer whose wines you all should know very well by now) and experienced one of France's truly perfect pairings first hand.

Let me back up a little bit.  Back in the Spring, I offered two whites from Domaine Saint Pierre, one a Chardonnay made in the fresher Ouillé style and the other a Savagnin made in the oxidative Sous Voile style.

For those of you who missed that offer or would like a refresher, read it here.  Through that offer, a bunch of you were introduced to the wonderful world of oxidative Jura whites via the fantastic Savagnin de Voile 2010 and those of you who were seasoned vets of the Sous Voile scene were also quite pleased with it.

But, I need to tell you that there's a little bit more of it available and here's why you need to get some.

We (that is me, Mike and Jason, my importer friends I was on the trip with) arrived to meet with Fabrice Dodane (proprietor/winemaker/character), and following a trip through his vines and a nice tasting of recently and yet-to-be bottled wines, we headed through town to a beautiful hotel called Castel Damandre for dinner. 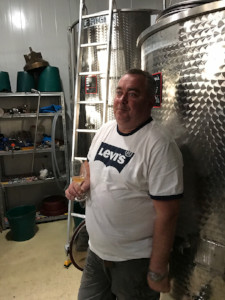 Following some fabulous amuse involving trout and, somewhat surprising given our geographical location, a delicious appetizer of lobster from Normandy (both of which were lovely with the fresh, or Ouillé, Savagnin), the main attraction arrived - Poularde de Bresse aux Vin Jaune - chicken in a cream sauce of vin jaune and morels.

But it's not just any chicken either.  Poularde de Bresse is the famous local breed, so famous, in fact, that it's a chicken appellation.

Mike'd told me many times that the greatest pairing with oxidative wines from the Jura is Poulet aux Vin Jaune, and I'd never gotten around to try and make it myself, so I was highly anticipating this plate.

(He also mentioned that this was the best version he's ever had.)

When the plates arrived, I was giddy.  As you can see from the picture, it was definitely an upscale version of this most comforting and humble of dishes. 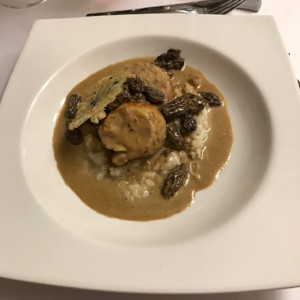 But before any of us could take a bite, Fabrice quickly reached for the open bottle of his 2010 Savagnin de Voille (the exact wine on offer again today) and poured us each a glass.  The energy with which he did made it seem like it was the most important thing in the world at that moment...

...and after my first bite and sip, I realized that it was, in fact, the most important thing at that moment...

...after I came back to reality, that is.

I say 'back to reality' because, upon first taste of the two together, my head kinda rolled back and I collapsed into my seat in pure bliss (that sounds weird, I know, but it was really that good).

The supple, fatty chicken, and the earthy, nutty sauce were sublime on their own, but with a sip of the Savagnin, the whole thing was elevated to some other place.  Not only did the wine make the chicken better, but the chicken somehow changed the wine.

In addition to accentuating the savory nuttiness, it also brought out this crazy bright, flowery, fruity element.  It was really like you couldn't have one without the other - on their own, they're both great, but having them together was like unlocking some door to a hidden universe.

I battled myself for the rest of the dish - one half of me wanted to shovel bite after bite while the other half fought hard to make sure I savored every morsel and sip.

There have been very few plates that I've been so sad to get to the end of.

Afterwards we drank some reds and observed Fabrice's hilarious rapport with the server and chef.

Eventually the cheese cart rolled around and the Vin Jaune was poured - that's another story of amazingness altogether.


To say I was 'content' wouldn't quite cover it.


I've been talking about it non-stop since I got home and, this past weekend, we were up in the Catskills and I took my first stab at it making it.  It was good for a first try and, with great help from the 2010 Savagnin, I almost did some justice to the original experience.

It's a fairly easy recipe and a search for 'Chicken with Vin Jaune' will yield a number of solid recipes in English.  Preparing it actually makes you realize what a beautifully simple dish it really is - and you don't have to use a pricey 'Vin Jaune' in the sauce, a little of this Savagnin or even and Alsatian white will probably do just fine if you're in a pinch.

If you can find some Jaune, though, it will make all the difference.

So, there you have it, a chance to experience for yourself one of the truly humble-yet-divine pairings on earth.

Arbois Chardonnay Les Brulées 2015 $36 - a lovely glass of Ouillé (non-oxidative) Chardonnay from Clay/Limestone soils.  Super flowery and lively, with touches of the fleeting savory undertones that Arbois is known for.

Arbois Pinot Noir Cuvée Saint Pierre 2016 1.5L $73 - this is the same Cuvée of Pinot Noir from Fabrice that I've offered a number of times in the past to great enthusiasm, albeit a new vintage.  Soft, delicate, high-toned and extremely aromatic, this is a textbook Pinot from Arbois and a great value at that.  (Yes, I know, only magnums available at the moment, but they're a great excuse for a dinner party.)