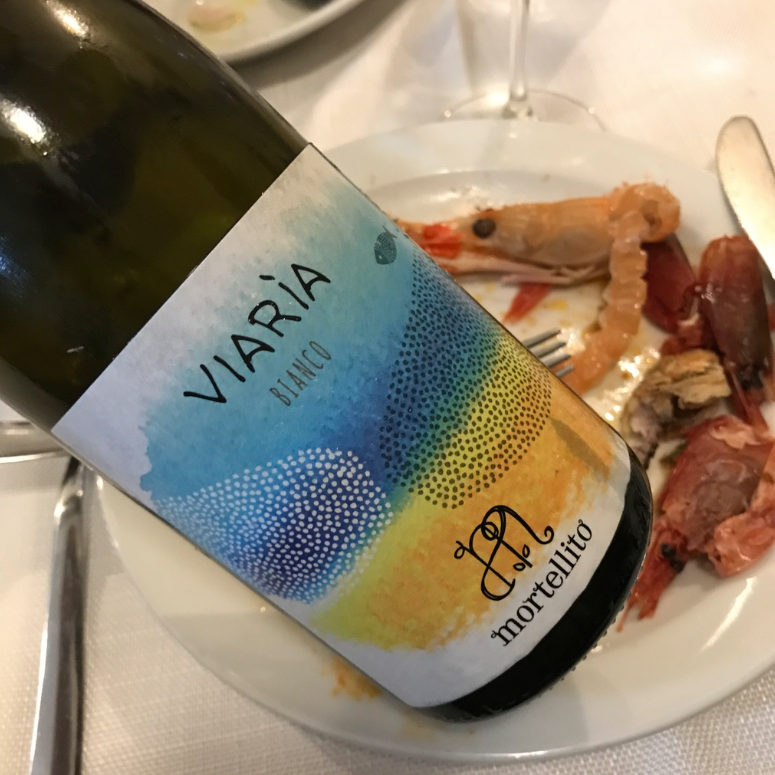 On an Island Dripping with Exciting Wines, Mortellito is in the Lead Pack

One of last year's breakout hits here at MCF were the wines of Dario Serrentino's Mortellito Estate, nestled in the Val di Noto on Sicily's southeastern coast.

I first met him when he stopped in to show me his wines here at the shop last June, and a few months later, we were in Noto visiting him as the final stop of our Southern Italy tour.

The Noto is certainly a warm place, but the sandy/limestone soils and briny ocean air, combined with Dario's light touch and focus on...well, focus, endow the wines with a bright, chiseled, infinitely engaging personality.  They highlight the finer points of each varietal, while minimizing their often overt characteristics.

We pulled up for a quick stroll through Dario's vineyards, and I emphasize 'quick', because he and his team were literally in the middle of harvest.

With a look of urgency on his face that many of you would probably recognize me having during the height of the December madness, he quickly showed us around, and then bid us farewell as we set off to Marzamemi to have lunch on the impossibly perfect seaside patio of the Taverna La Cialoma.

This would be the first of two, absolutely epic seafood meals that day, both of which centered heavily around two of the island's most prized local ingredients, the Pistacchio di Bronte and the Gamberi Rossi, the astoundingly delicious local species of red prawn.

The second meal was, of course, dinner, which a much more relaxed Dario joined us for at his friend's restaurant.

At lunch, we ordered various local wines off the list, but at dinner, we enjoyed Dario's three

wines with the food, and it was like a perfect storm of humble simplicity.  The impossibly fresh ingredients in each no-fuss dish, when combined with Dario's impossibly fresh, no-fuss wines was...where words go to fail, I suppose.

One of the things that made it all so brilliant, though, was the way you could hop from wine to wine, two very different whites and a red, without blinking an eye.  Each wine offered something equally as compelling to each dish, but each came at it from a different angle.

At one point, I just asked for two more glasses so that I could just sip each wine at will...

...it made things a lot easier.

The mineral, salty, electric Calaiancu Bianco (Grillo & Catarratto) is the most 'obvious' candidate for an epic seafood meal, but a brilliant one, at that.  With the Calaiancu, it's about pairing 'like elements' (briny, mineral, fresh) with 'like elements'.

The flowery, smoky, savory and nutty (and dry, dry, dry) Viaria Bianco will change your mind about anything made from 'moscato' (Moscato di Noto, specifically).  Here, the more exotic notes offered a counterpoint to what was on the plate, which pushed each dish in new directions.

Then there was the Calaniuru Rosso (Frappato with 25% of Nero d'Avola), which might be the best red wine that has ever been paired with fish, and one of the only ones that I would ever think to pair with such fresh, delicate seafood, specifically.  The bright, juicy red fruits are extremely light and vibrant, but what I love about the Calaniuru is how the focus is not on the fruits, but on the subtle savory/spicy streak that runs through them.  It's kinda the paradigm for 'chiller red' in my book.

Sicily is a very special place...a special place, that produces some of the most exciting and vibrant wines on Earth...

...and Mortellito is making some of the most exciting and vibrant wines of anyone in Sicily.