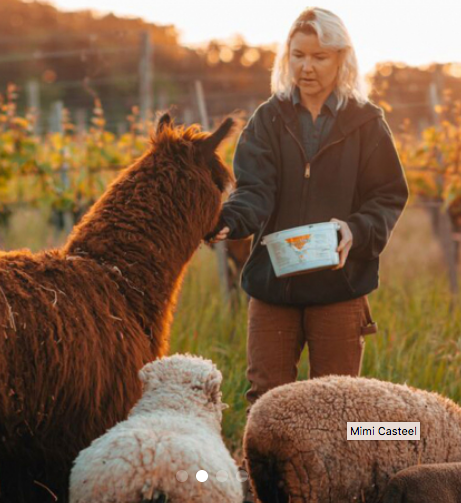 This is one I've wanted to write for a very long time.

Up until now, though, it's been one of those wines that I'd only get a six-pack or two of here and there, making it something I couldn't 'blast' out to everyone.

So I quietly sold it, a bottle or two at a time, to my most enthusiastic OR Pinot fans.

But, one day, Robin, my Polaner rep, sent me a note asking if she could bring by Mimi Casteel, winemaker of Hope Well Pinot Noir, saying that we really needed to meet, because she thought I'd love her wines, but that I'd also get a kick out of her.

Fast forward to the meeting, and Robin was right.  Not only did I find her wines to be fabulous, but Mimi and I immediately had that 'fellow wise-ass' kinda bond going.

In the midst of explaining why she doesn't 'pick early', but chooses, instead to pick sometimes weeks later than everyone else (not the most 'en vogue' approach currently), the amount of detail she went into had my mind racing just to keep pace.

She spoke of elements I never hear anyone else really discuss, and it became clear that her approach went so much deeper and was so much more all-encompassing than maybe anyone I'd met before.

The crux of what she was saying is that, yes, picking early might lend a certain feeling of energy to your Pinot Noir, suiting certain current tastes, but that, for her, only when Pinot Noir has had enough time on the vine to reach what she calls 'the parking lot', does all of the magic happen.

That's when all of the aromatic compounds of the surrounding habitat land on the skins and become part of the 'gout de terroir'.

(I asked if she could spell it out for me later in an email and it was seriously the most amazingly detailed letter I think I've received that wasn't some kind of credit card terms...)

Now, I'm not saying she's the only farmer/winemaker who can so easily and thoroughly rattle off such intricacies of biochemistry, but to say I was impressed would be quite the understatement.

After letting all the info steep for a moment, I went back for another taste of her Pinot.  The completeness of the wine was even more pronounced...its subtle beauty...the wisdom in the glass was enough to quiet my mind.

So, like I said, I went about selling this tiny-production wine as I could get it.

Then, just last week, I saw this fantastic article from Leslie Pariseau at PUNCH, that I really thought captured what it is about Mimi and her approach that those who've met her find so captivating.

I emailed Mimi to congratulate her.

Then I emailed Robin and said 'whatever happened to those extra cases of Hope Well we'd discussed?'

After poking me for almost missing out on them, we got it lined up...enough, this time, to share with all of you.

Not only is she making fabulous wine, with a near-obsessive desire to understand the subtle interactions of all elements involved, when it comes to her vineyard, she's also a voice for the regenerative farming, a practice she believes offers solutions both for soil health and carbon sequestration.

The article covers all of that very well, so rather than paraphrase it here, I highly recommend checking it out.

My favorite passage in the article, though, is this one, because it really sums up the way I felt when I was tasting her Pinot that day -

If you could experience terroir at its most truthful—its most purely reflective essence—you’d have to rewind hundreds of years; we’ve been cultivating land too hard and for too long to have any sense of what real place tastes like. “I don’t think we know what a wine tastes like when it’s grown with its fully intact system around it. We don’t know what it’s like to taste wine that is the most naked reflection of its place,” she says. “I want to know what wine used to taste like, when vineyards were not surrounded by vineyards, but when vineyards were surrounded by wild nature.” Her work is not only an attempt to recapture some elusive flavor, but also to show the world that possibility is so close—as close as the ground beneath our feet.