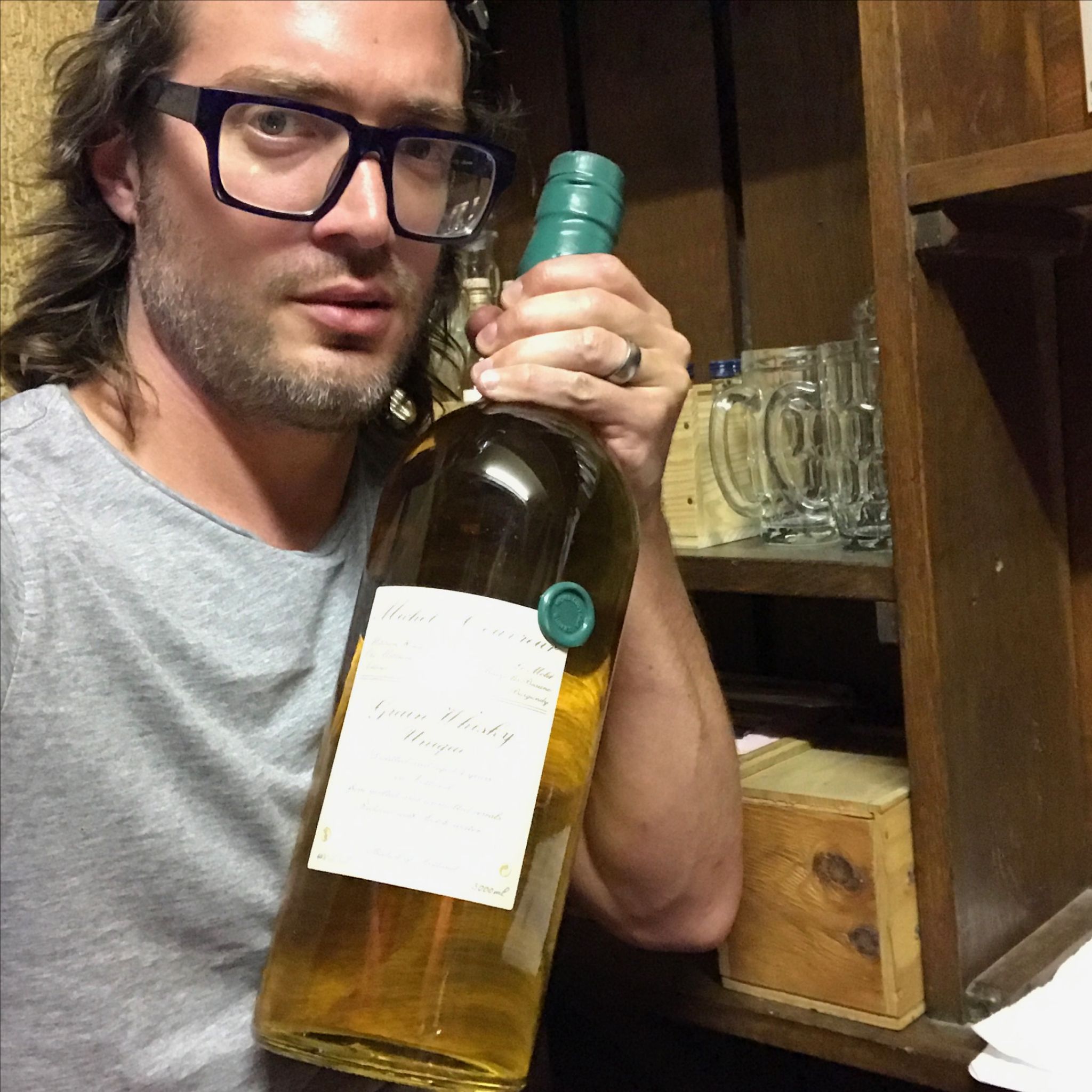 NOTE:  I originally sent this offer back during the Summer, because that's when the first shipment arrived.  BUT...since many people aren't drinking rich whiskys during the heights of Summer, I wanted to re-send it sometime during the cold months (aka, Scotch season)...(aka, now).

Word came down late yesterday that the container is inbounding this week, so, even though it's a busy Saturday, I wanted to resend it.

I'm hoping to have them on Monday.

Today's offer includes the utra-special/rare Tria Juncta in Uno, a deep, rich blend of two different barrels of 'Very Sherried' (25 and 29 year olds aged in PX) with a 16yo Bere Barley malt, all distilled in 1989, the year that Couvreur Whiskys was born.  You know, just your average few-hundred bottle production everyday kinda thing...

Stuff that in your stocking...

Imagine you're waiting in line for one of those high-production rides at Disney World, in one of those meandering tunnels where you're immersed in an environment of ride-themed tchotchkes and decorations and, each time you turn a corner expecting the line to end, a whole new room full of tchotchkes appears in a seemingly never-ending maze.

Now imagine that the ride you're waiting for tells the story of a Belgian man who moves to Burgundy and sets up shop as a wine maker/broker.  He also spends a lot of time in Scotland, eventually moves there, becomes involved in whisky, then retires back to Burgundy, sets up a cellar in the little village of Bouzy les Beaune, and proceeds to spend the rest of his life scouring the world for the oldest, most unique barrels from Sherry (and the Jura) to age the casks of fresh single malt whiskys that he brings back from Scotland in.

Then imagine that the tchotchkes on the walls aren't fake at all, but are, in fact, the actual dark, crusty old barrels that are filled with these whiskys, surrounded by wet, dank, yeast-coated stone walls.  And every time you think you've reached the end of this whisky lover's dreamscape, you turn a corner and find a new room filled with even more crusty, dank old barrels or mold covered demijohns, or bin shelves of the rarest library whiskys from their old stock.

Such a place exists, and there are no talking animatronic robots or, annoying songs blaring or screaming kids or whatever else...

...just barrels upon barrels of Scotch whisky that are slowly and silently melding themselves with the ages and ages worth of wisdom contained in each stave of each barrel.

I'd been a fan of the Whiskies of Michel Couvreur for a while but...well, once you've walked into that unmarked door of an unassuming building in Bouzy les Beaune, fandom quickly turns to obsession.

When you wander past the tiny office and the dark tasting room, through the old iron door, and down the narrow, brick-tunneled stairway into this impossibly perfect, dank, musty paradise, it's really easy to think you've stepped into a fairy tale for brown liquor fans.

It's the fairy tale of Michel Couvreur but it's also a beautiful, musty, dusty reality.

The mad scientist Belgian at the heart of this story is the aforementioned Michel Couvreur, and his whiskys are probably the last great, truly underappreciated whiskys on the market.

The bottom line is this - in a category that's become dominated by trends and PR fueled launch parties and fancy packaging and celebrity endorsements, this is like something out of a lost era.

Of course, that's just my take, but I believe these are some of the most extraordinarily unique whiskies you'll ever encounter.

Because of Couvreur's obsession not only with the barrels, but with the original contents of the barrels and the length of time said contents lived in these barrels and because the remaining contents were always left at least partially in the barrels before they were filled with the whisky, the story that each one tells is so much more hauntingly descriptive.

These are the most vinous whiskys I've ever had...they're Scotches with an unmistakably French accent.

That is to say that, in terms of flavor, for me they land somewhere between classic Scotch and Armagnac...in other words, the best of both worlds for old school brown-liquor purists.

The morning I spent there with Mike and Jason (and Fabrice from Domaine St Pierre), was about as eye-opening a few hours that I've had in this business.

Jean-Arnaud Frantzen, the cellar master who's now manning things with Couvreur's son-in-law, took us all the way through the cellar, thieving samples from cask after crusty cask, some of which required some rather acrobatic climbing to reach.

You'd think that it might be overwhelming to process so much at once, but each tiny taste we were offered (whatever was left in the glass went right back into the cask, naturally), offered something so special - a quiet meditative moment that, even while fleeting, left a permanent mark somewhere on your psyche.

(sorry for the woo-woo, but it's true)

After reaching the very deepest, dankest, most humid section of the cellar (yes, the cellar is zoned by humidity and barrels are moved around accordingly), where we tasted from some very old bottles, on our way out, Fabrice bought us a bottle of the 'Very Sherried' to enjoy over the rest of our trip.

A few nights later, while battling some flies on the ceiling of our hotel room in Lyon, we cracked into the 'Very' and we sat there and marveled at both how amazingly delicious/dangerously drinkable it was and, most importantly, how truly underappreciated the entire lineup is.

We kept talking about just how comically more expensive any whisky of this quality with a Scottish or Japanese label on it would be.

While they do have a small-but-devoted following here in the states, we were determined to change that.

This is the 'flagship' whisky in the Couvreur lineup, it's a 12 year old malt blend that spent most of its life in sweet Pedro Ximenez casks.  Like any flagship in a lineup, it conveys the very soul of Couvreur - it's a little fruity, a little smoky and a lot of Sherry...y, but at its heart is that 'vinous' quality that also pushes things into an Armagnac-like zone.  There's great nuttiness and old wood at the edges and the finish is long and slow.  It also makes a powerfully refreshing highball...

The Unique is 'unique' to the Couvreur lineup in the fact that it's so delicately framed by the barrel - spending just 4 years in old whisky casks.  It's a classic grain/malt blend and it also drinks the most 'blendy' of the bunch, too...which I guess makes sense.  It's light in color and highly fragrant, with that terrific, classic salty/iodine thing on the nimble finish.  It's the lean and mean Couvreur and is perfect for when you're looking for something light and classic, but with more intrigue than one of the old-school workhorse blends you see behind every home bar.

This loner 'non-Sherry' single malt spent over ten years in a Vin Jaune barrel.  It was a definitely standout while we were tasting, because it's lighter on its feet than the richer, Sherry-influenced whiskies, but also because it's definitely more of an 'unusual' taste compared to the rest.  It's got warm and nutty elements (like a Jaune), but it also has a citric brightness to it.  It's really very cool stuff for the more adventurous whisky drinker.

The Candid is a single peated malt that spends nine years in PX casks, first in the drier part of the cellar, but eventually making its way to the humid deep end.  It clocks in as the heftiest of the bunch, hovering just under 100 proof, but the deeply sherried elements (dried fruits, vanilla, licorice) keep everything in balance and the kiss of pungent smoke is icing on the proverbial cake.  This is the kind of whisky that makes you wish it was a cold, dreary day outside so that you can enjoy it in its proper element.

With the 'Auld', we're really getting into the crazy, fantasy world that is MC.  This is a single malt whisky that spends (around) 15 years in very old, very still-filled-with-remnants-of-the-original-contents PX barrels.  For Jean Arnaud, this is as good a demonstration of the genius of Couvreur's idea as any, for it shows just how much of a factor an 'impregnated' barrel (one that had spent so much time carrying something like sweet PX) can be in the flavor, especially when remnants of said contents are incorporated into the whisky.  I guess it's an oxymoron to call something 'intensely smooth', but this is so smooth that it's almost unnerving...so that's what I'm calling it.  There is incredible depth to the sweet woody profile that seems to pull itself in a million directions at once - sometimes nutty, sometimes fruity sometimes savory, sometimes sweet, it's just flat out delicious.

The 'Very' is where things wander into that rarefied realm of whisky where it almost ceases to be recognizable as a whisky, and instead demands to be recognized as something from another planet.  It's so deep, so insanely smooth, so comfortingly supple, so exotically complex, so...just...effing...delicious that it's hard to put into words.  Over 25 years of time in a PX barrel gives a whisky a lot of time to think, and it seems that this one pondered the very secrets of the universe, which we now get to consume in liquid form.  When you're sipping this, the big questions of existence seem to make perfect sense...if only for the amount of time it takes to finish a glass...which is unfortunately a lot quicker than you'd like.

One of the most special whiskys ever produced at Couvreur, dreamt up by the man himself, with just a few hundred bottles produced, it really doesn't get much more 'Couvreur' than the Tria Juncto.  The name, meaning 'Three in One' refers to the two different barrels of 'Very Sherried', a 25 and 29 year old, that are blended with the Bere Barley 16yo, made from the famous wild variety of Barley native to Orkney.  Deep, rich and supple, the dark, highly sherried/oxidative profile shows just about every flavor you could expect from nutty, to fruity, to raisin-y, to smoky, to herbaceous, with a distinctly wild and leathery undercurrent.  Yet again, you've stepped off into the twilight zone, where whisky ceases to be whisky and becomes some higher form of intelligence.  Drink that intelligence.

ALL ITEMS ARE LIMITED, CERTAIN ITEMS ARE EXTREMELY LIMITED.

ALL PRICES ARE NET.

NO SHIPPING OUTSIDE OF NY.

We Will Hold for Future Collection All Out-of-State Purchases.