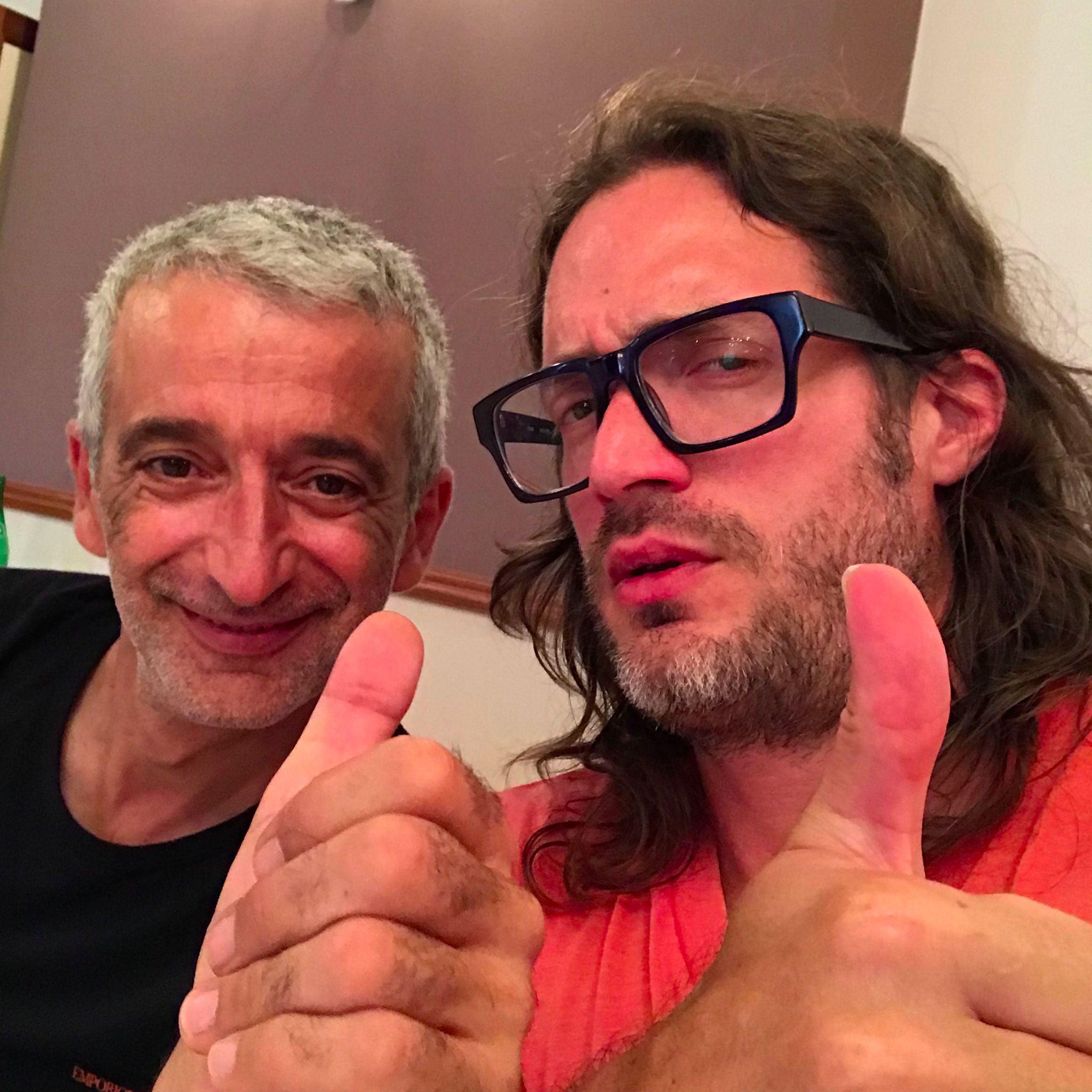 In what now seems like a long-lost universe of lighthearted wanderlust through Southern Italy last September, I had the chance not only to meet the man behind what I think is the most profound wine in Italy right now, but also tour his vineyards and have lunch with him...and that lunch was also a tasting of every wine he's made.

By I, I of course mean me and a bunch of other guys (Mike and Jason from MFW, Ernest, Will and Ben from Portovino and this guy named Joe Beddia who has this pizzeria in Philly...you may have heard of him?) who'd already spent the last few days being overstuffed and wined at every meal.

Anyway, we pulled off to the side of a road on the top of a hill with Vesuvio far in the distance and, well, there he was, standing in the street waiting for us, and dressed in the most impossibly Italian, 'I-Live-in-a-One-Room-House-Next-to-My-Tiny-Winery-and-Make-Unbelievably-Great-and-Uncompromising-Wine-in-Tiny-Quantities' kind of way.

We chatted for a bit (Ernest, doing his best to translate his Campanian dialect) and then briefly toured his tiny winery.  After that, we wandered his vineyards in the area, the ones that yield today's two wines, the Taurasi Poliphemo and Taurasi Riserva Puro Sangue, both from the 2014 vintage.

He took special care to demonstrate how, there in Paternopoli, the soils were sandy clay/limestone that were endowed with pyroclastics, or the rocks created by Vesuvio's ancient eruptions.  This is still highly volcanic soil, but not necessarily the black 'lava rock' type stuff you find closer to the volcano.

This 'sandiness' endows Luigi's wines with a very fine aromatic precision at the edges, something that you sometimes have to do a bit of an olfactory/palate squint, if you will, to catch among all that brooding, wild, volcanic personality.

After strolling through the vines, it was time for lunch, and Luigi, fearing the notion of seating eight people in his tiny kitchen, had arranged lunch for us at a local restaurant...and we were going to taste every red wine he'd made since his initial release of 2003.

The restaurant was a gorgeous, bright place with an amazing selection of wines from the area, which was an awesome thing to see...and we basically had the place to ourselves.

The lunch that Luigi had arranged was, of course, delicious...but it was also like 10 courses long...and these weren't tasting menu-sized portions either.  (Keep in mind that we were all already pretty overloaded on food.)  Ask anyone who knows me and they'll tell you I can hang at the table...for a while...but this was another level.  To top it off, each time the server came by, he scolded us for having unfinished plates, and even went so far as to refuse to clear anything until everyone was done.

Anyway, a minor complaint, I know.  As we made our way through each of Luigi's wines, three things stood out.

One - the wines were ageing beautifully, even the earliest ones.

Two - as nice as their progress had been to that point, they all had plenty of life ahead of them.

Three - most importantly, you could see in the moment just how much better Luigi was getting with each passing vintage.

(Keep in mind, this was a man who returned home to his family's vineyards after a life in politics to take up winemaking with basically zero experience.)

There was a noticeable threshold right around the 2008 vintage where you could see the wines really begin to soar.

By the time we reached the end, when the barrel-sample '14s were poured, we were all so insanely full, and our palates were so weighed down by all the structure we'd just tasted through.  The 2014s, however, from the cooler, wetter vintage, were a complete breath of fresh air.

They were still dark, intensely mineral, smoky and wild, but there was a daintier (if one can associate such a word with Aglianico) and more fragrant nature to them.  They were more elegant and free-spirited...the typically savage disposition was made a bit more civilized by the coolness.

Between the two, the typical dichotomy was present.  The 80-plus year old vines in the

The younger-vine Riserva Puro Sangue, was, as in 2013, more engaging and approachable.  The dazzling aromatics and more supple texture make it something you can drink now with all manner of enjoyment, especially in a livelier, more streamlined format like this 2014.

As I've said a million times already in these newsletters, these wines are so structured and built for aging that your kids will probably be able to pass them on.

As I've said a million times already in these newsletters, I firmly believe that Tecce is making the most exciting, soul-drenched and, yes, most important wines in Italy.

And, as I've said a million times already in these newsletters, you should all be loading up on these while you can...you'll thank me later.

BTW, at the end of the meal, we all emerged out into the bright Campanian sun, stuffed to the max, and slightly dreading the van-ride down to Napoli.

A round of espresso arrived, so I collapsed into one of the patio chairs and couldn't resist the temptation to light one of my tiny, 10-minute Montecristos.

Luigi sat down next to me and lit a hand-rolled cigarette.  We soaked up the view for a moment, I was feeling quite satisfied, having just wined and dined with a winemaking idol.  He then he turned and offered the cigarette to me.

With a sly grin, he said in his raspy, high-pitched voice, 'Hashish'.

What was I supposed to do...say no?