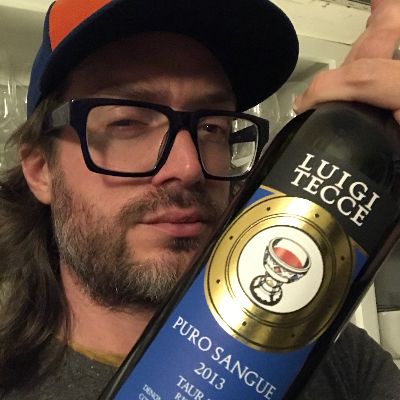 Pardon my colorful speech, but that was all I said in a text to my friends Mike and Josie last night with a picture of this bottle next to an empty glass.

Tecce (who, as most of you know by now, is a producer I feel very strongly about) has just shipped his latest releases.

Included on this shipment was the very first vintage of this mind-bending Riserva.

When Luigi began in the late nineties, he was learning to make wine on the fly.

By 2005, he'd achieved DOCG status for the Taurasi Poliphemo.

Then by around 2009, he had, in my opinion, started to really distinguish himself as one of the leading producers in the region.

By this time last year, I was ready to declare him one of, if not the, most important winemakers in Italy.

Now, with this Riserva Purosangue, I think he's reaching into a new reality.

The Puro Sangue comes from its own vineyard in that was planted about 15 years ago, but the winemaking is essentially the same as the Taurasi Poliphemo, only with an extra year in the barrel.

Whereas the Poliphemo is a beast, the extra barrel time here has endowed this Riserva with a level of refinement I didn't think was possible from an Aglianico of this pedigree made in this traditional a style.

As opposed to the long, edgy, imposing tannins in Poliphemo, the Puro's tannins, while just as infinitely dense, are much more orderly and well-behaved, and there is a floral elegance to this wine that is, frankly, blowing my mind.

It's like he captured the beast and dressed it in Joseph's technicolor dream coat.

While it doesn't quite have that Mariana trench-like depth of raw volcanic minerality that you get from the Poliphemo's 80-year old vines, that same Pliny the Elder-ish soul of ancient Campania oozes out of it.

It didn't change much over the course of the day yesterday, if anything it firmed up slightly, and as of this morning, it hadn't budged either, showing the same flowery elegance that quickly retreated into tight-lipped modesty.

It was as if it were smiling cheekily back at me and saying 'You thought I would have loosened up, didn't you?'

Point being that all the complexity you experience now is merely a tease of what's buried deep inside, waiting to slowly reveal itself over who knows how many years of life.

Along with the Riserva, we also welcome in the newest vintage of the Satyricon Campi Taurasini from the very structured and classic 2016 vintage, which, while certainly friendlier than both Taurasi, is still a wine that will still probably easily see its 20th birthday.

All of the wild, exotic aromatics and volcanic, mineral-rich intensity is there, though.  So if you want to get a glimpse of the Tecce character early on, this is the wine to crack.

For me, there aren't enough superlatives to use when describing the importance and sheer quality of Luigi's wines, but most of you already know that by now.

Hurry up and buy some before I change my mind and keep 'em for myself!