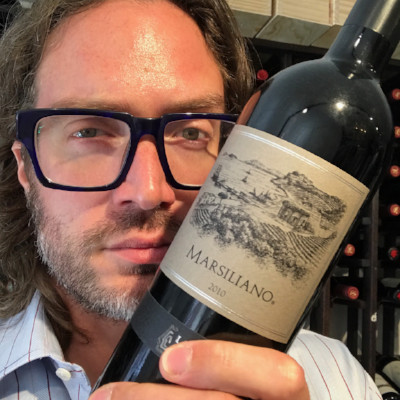 That's probably what you were just thinking, right?

But take a journey with me to The Phlegraean Fields (better known as Campi Flegrei), a dormant caldera West of Naples, one of the more 'volcanic' places you'll encounter in all of Europe.

Here we find the La Sibilla winery, a fantastic, organic producer whose wines I talk about quite often.  Just a quick view of the soils they farm should give you a good idea of what to expect here - we're talking about dense, gritty sand and ash.

Their 'Riserva' level red is called Marsiliano, and it's a blend of the three grapes I mentioned above (70%, 20%, 10% respectively) and it's one of Campania's most singular wines in my opinion.

I last offered the 2009 vintage of Marsiliano a few years ago and, while selling the huge chunk I took on was a slow process, I was more than happy to have the opportunity to turn people on to it one bottle at a time.

Over that period, as I'd imagined/hoped, the Marsiliano developed its own cult following.

Where a wine like Taurasi is certainly singular and wild in its own right, they still tend to be a bit more...'noble' or 'high-minded' in their pursuits.

Marsiliano, on the other hand, is, in my mind, probably the most unfettered wine produced in the region.  What I mean when I say that is that no nuance or flavor hides itself here.  The dark Southern fruit, the musky wildness, the campfire smoke, the intense minerality, the pepper and spice and the burly structure are all equally on display...especially in this 2010.

While the 2009 was a bit more moody - one bottle would be full-throated while others would be more reticent - every bottle of this 2010 revels in its own pungent masculinity.  The dark fruit is forward and open, giving way to all the wonderful, wild volcanic craziness (spice, smoke, ash, rocks) you can ask for.

I can't think of a better 'bridge' wine to offer right now, when it's still hot, but all of us are thinking about the feel and flavors of Fall - it's burly enough to handle that last rack of ribs you're smoking this weekend, but it will also transition nicely into that braised leg of lamb or hearty pasta you can't wait to have once the mercury falls.

As I said in the original offer I sent for the 2009, '...it's everything you can ask for as an adventurous gastronome and it stacks up to many wines that are double or triple the price.'

Aside from the pretension of quoting myself, I believe that that summed it up quite nicely.

And, just for the sake of saying 'Happy September' or 'Happy Football Season' or whatever you'd like to celebrate, I'm offering it today with a very special price!