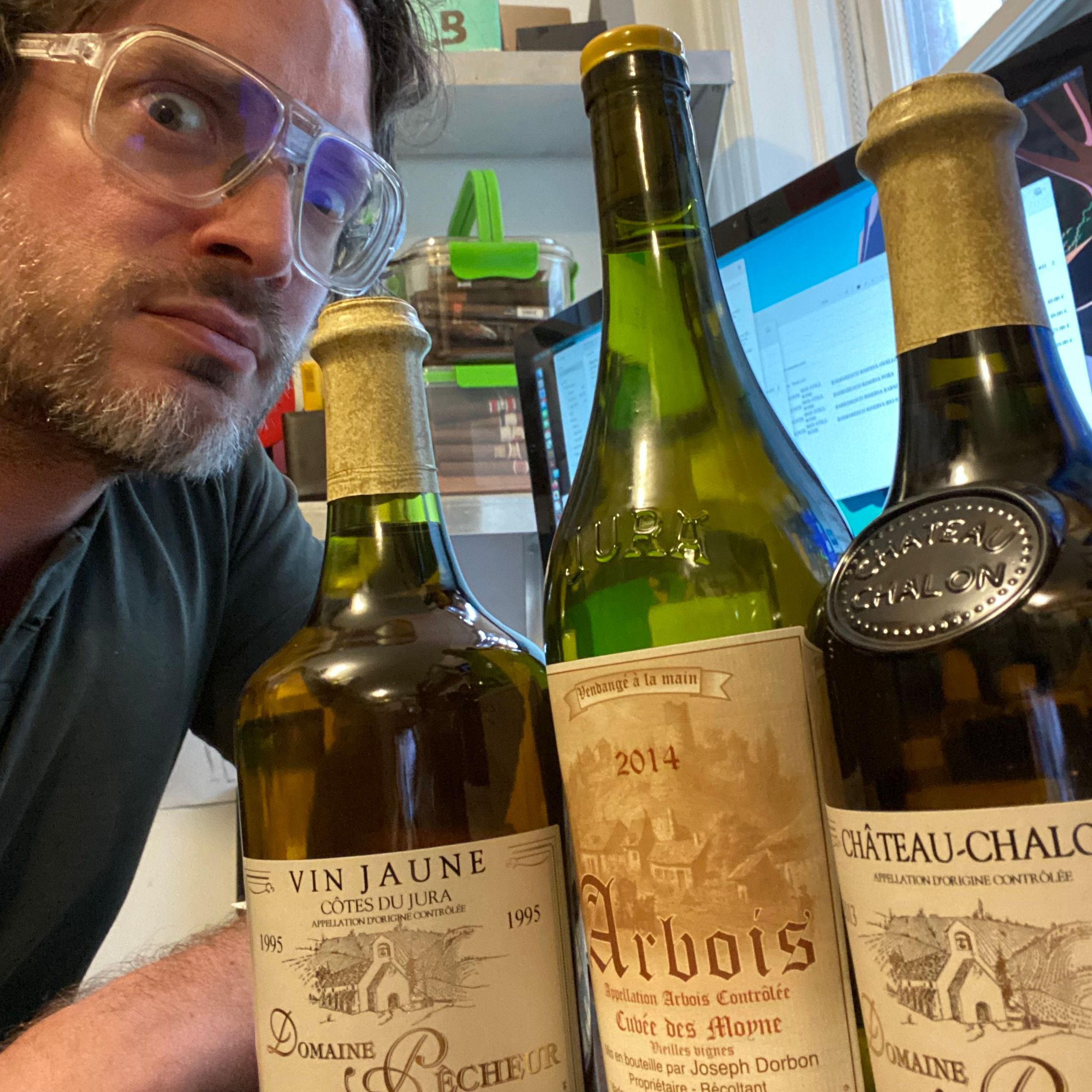 In a newsletter a few weeks back, I mentioned how visions of Coq au Vin Jaune had been dancing in my mind, so, the other night, my friends Mike and Ben came over to the shop for a long planned night of Jura wine and food.

Inspired by our favorite French food/wine channel on YouTube, it was going to center around a pot of

Coq au Vin Jaune, a board of Comté and Morbier, a fair amount of oddball discussions, and many bottles, including some Jaune and Chalon, which I now want to highlight for each of you.

One of the signature dishes of the Jura, Coq au Vin Jaune is quite simple to make, but will blow your mind in its creamy, nutty, earthy depth, most especially when paired with the oxidative whites of the region.

We started with a bottle of Domaine Saint Pierre's Savagnin Autrement 2018 from our good friend Fabrice Dodane.  It's a topped-up (Ouillé) white that's fresh, lively and floral, with delicately savory nuances underneath.  It was the perfect starter.

Then, we jumped into the sous voile (lightly oxidative) things for cheese time.  Joseph Dorbon's Cuvée des Moyne VV 2014 takes the lively elements present in the Saint Pierre and adds more richness and savory depth thanks to the lightly oxidative character.  Le Caveau de Bacchus's 2014 Savagnin was another wonderful example of the style.  With its more textured mouthfeel and deeper nutty/savory elements, it was a nice step further down the oxidative rabbit hole.

While the chicken browned, and the morels soaked, I cracked a red - Puffeney's Trousseau Berangers 2013 (sorry, not for sale) - and let it breathe.

As the chicken slowly braised in the creamy sauce, the shop began to fill with the intoxicating nutty,

earthy, mushroom-y aromas, and it was time to bring out the stars of the show - Domaine Pecheur's 2013 Château Chalon and 1995 Vin Jaune.

The Chalon was rich, nutty and savory, but, in its relatively youthful state, was also paradoxically bright and lively on the finish.  Fabulous already, but it'll last as long as you wanna let it.

The Jaune, on the other hand, now in its 17th year, was deeply earthy, more darkly pitched and much more intensely nutty, salty and savory.  There was a softness to the edges and an undeniable wisdom to what it had to say.

Bouncing between the two, with the occasional sip of the red, while savoring the chicken had our neurons firing into euphoria...so much so that we were drinking the sauce off the plate in pure, food-based bliss.

Afterwards, we continued to drink the wines we had open, while taking in a bit more of the cheeses, and before we all knew it, it was mere hours before our kids would be waking us up.

(plus some other great Jura wines we have in stock)