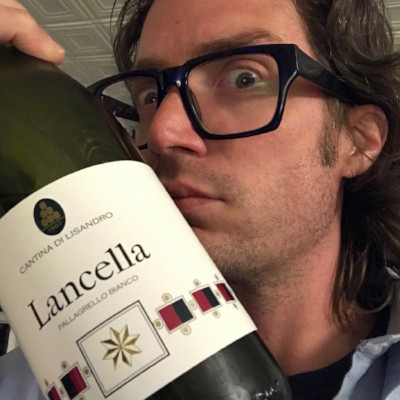 I'll Take That With a Pile of Scallops...

Full discolsure - I wrote about this exact wine 13 months ago (the title of the newsletter was 'The Effortless Profundity of Southern Italian Whites', and I'm sure many of you can still find it in your email).

Not the same wine from a previous vintage, this exact wine.

Why again?  Because the Importer just mentioned that they still had some and I was like 'Yes!', thinking it had to have gotten even better than it was last Summer.

As soon as it arrived, I threw one right into the fridge and pulled the cork about an hour later.

It was delicious then...it's lights out now!

It's also yet another example of my theory that the Southern half of Italy is the most criminally underappreciated place on earth when it comes to wine.

It's also another example of how well these wines age...even the whites...even humble examples...

Most everyone knows Falanghina, Fiano and Greco, but Pallagrello (Bianco, there is a Nero too) sits solidly in fourth place, that is if you know it at all.

Falanghina is the tropical one, Greco is the firm one, Fiano is the smoky/spicy one...so where does that leave Pallagrello?

The short answer is pour a glass of this and find out for yourself!  But...in an attempt to get you to do that, I'll try my best to describe it...

Pallagrello is the cheesy/salty/peppery one, as this beautiful example in demonstrates in particular.  Like most great Southern whites, the 'fruit' elements are almost an afterthought...it's all about the savory stuff.

Yes, on the nose there is a nice citric hint, but once you get it on the palate, it's time for a salinity and cheesiness that's flaked with peppery nuance and ends with a bracing, mineral finish.

In between whiffs and sips, Greg and I were marveling at how much it offered and were rattling off a laundry list of foodstuffs that it would be perfect with.

For me, though, it couldn't be any better than a glass of this alongside a pile of seared scallops atop some spaghetti with garlic, oil, chili flakes and a judicious garnish of fresh parsley.