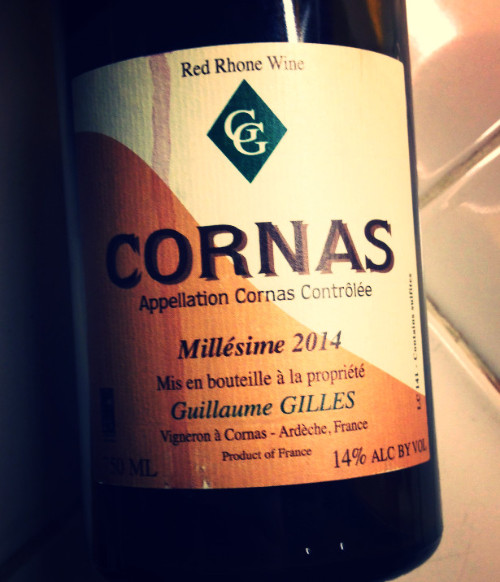 Right now, there's a lot of hype around the 2015s in the Rhone, both the North and the South.

I have to say, though, that recently I've tasted a number of the 2014s from the estates that release their wines later and, well, to say I was impressed just wouldn't quite cut it.

Let me put it this way, I've been so smitten with them that I'm considering a series of newsletters entitled 'BLEEP the 2015s '.

In all seriousness, though, while the dense, friendly and chewy 2015s will no doubt delight huge swaths of the Rhone-drinking population, the real character and terroir are on FULL DISPLAY in these 2014s, and the finesse and balance they show is the kind of thing that would make a believer out of even the heartiest Rhone-skeptic.

To start off this parade of fabulous fourteens is the Cornas from the man who's quickly becoming the darling of the new guard for this legendary terroir - Guillaume Gilles.

Gilles' wines lay on the less-severe end of the old-school Cornas spectrum, much like his mentor, the now-retired Robert Michel.  In the past five or so years, Guillaume and his wines have rocketed to acclaim among lovers of classic, savory and mineral-laden Syrah.

And that's exactly what we're dealing with here - a dark (really dark), chewy, wildly-savory, sauvage wine that, while dense enough to be approachable now, has firm tannins that clamp down on the intensely-mineral/stony finish, and reminds you of just what you're dealing with in terms of built-in longevity.

It was primary, but rather incredible on day 1.

Day 2 showed more of the wonderfully feral Cornas notes emerge and it just kept hanging on from there.

On day 3, even more of those notes came forward, as the density of the fruit began to fall into balance.

Actually, I just had another glass last night (which was day 6 at that point) and it was still quite delicious.  The fruit had shrunk in scale and the firm tannins softened all the way, but that gamey/mineral Syrah beauty was still in a lovely place.  Sure, the wine was beginning to tire, but there was still plenty of enjoyment to be found.

So, like I was saying earlier, there will be plenty to get excited about in 2015, BUT if you're someone who appreciates terroir over power, character over density and balance over weight, YOU SHOULD BE BUYING 2014s...

...before everyone's discovered them...

...while the wines are still reasonable...

...and available in any kind of quantity...