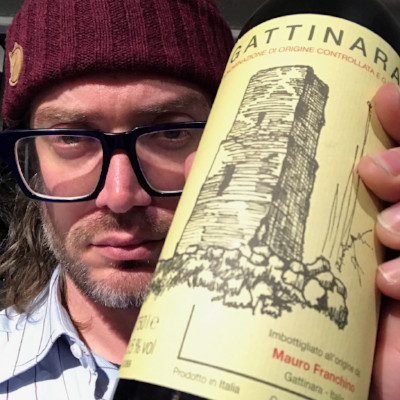 Franchino Gattinara 2013: The One We've Been Waiting For...or at least that I've been...

In the next week or so, I'll be rolling out a bunch of our staple favorites (Bois de Boursan Chateauneuf, Ruppert-Leroy Champagne, to name a few), but having just found out that today's wine had arrived instantly catapulted it to the front of the line.

The story of the discovery of Franchino is now well-documented for most of you (after all, I recount it every with each passing vintage), but for those of you who've joined in the last year, you can read that story HERE.

The first vintage I was able to offer was the 2008, which, up until this point was the best vintage I'd had other than that utterly captivating 1996 I was initiated with.

The 2009 was delicious, though a touch warm.  The 2010, through an allocation mistake by the winery, never made it to NYC, so we missed that one.  The positively exuberant 2011 was a huge hit and the airy, delicate 2012 kept the streak alive.

But for the past few years I've been looking ahead to the future...

...not to when I'd 'arrived' in terms of regard in the industry, or to when running my shop would be all joy and no stress, or to when the Mets win the World Series, or to any of the other hilariously misguided personal horizons we all gaze toward...

...but instead, I've been looking ahead to the arrival of the 2013 Gattinara from Franchino.

Because I really (really) have been looking forward to this one - a vintage that was not only great, but one that also allowed the true character, that I've always believed this wine was capable of, to express itself.

And to all of you who've been taking my word on it thus far, this is the real personification of Franchino - the unquestionable balance, soaring aromatics, the understated eloquence, the oh-so pure and nuance of Northern Nebbiolo all compacted into one of the most graceful, yet tightly-knit wines you'll encounter.

In my mind, it's a more complete and refined version of what the young 1996 must have tasted like.

Sometime in the next couple of weeks, I'll also be rolling out the new releases of the now 100% Roberto Conterno-owned Nervi (Nervi-Conterno) and, spoiler alert, the prices have doubled.  But because his name is attached to it, a whole new set of buyers will be lining up for the wines.

And, to be fair, the wines are stellar and are still worth the money...and will only get better as he revamps the entire operation.

But, if you want to be (or continue to be) a real insider with regard to the beauty and value of Alto Piemonte, for me Franchino, especially THIS Franchino, is an absolute must.

It may take a while yet, but Nervi-Conterno will truly put Alto Piemonte in the international spotlight and transform it from a source of geeky gems into a true destination region.

But when the dust settles, Franchino will be the one, like Cappellano or Bartolo or Beppe Rinaldi now are in Barolo, that everyone wished they bought at the outset...and 2013 will be the vintage that everyone waxes poetic about...