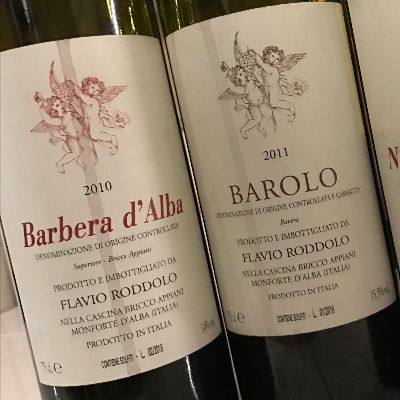 I often get asked which producers I think are the ones people should be paying attention to.

I also often ask other people the same question.

But anyway, when that conversation is happening in either direction around the topic of Barolo, and who, if any, are the under-the-radar or up-and-coming producers of top-notch traditional Barolo (and Barbera, Dolcetto, etc.) that you should start buying now, one name I often mention, and also often hear, is Flavio Roddolo.

Now, I've been selling his Barberas and (especially) his Dolcettos for a while now, the latter being some of the finest examples on the market, if you ask me.  I've also long been a huge fan of his Rosso Bricco Appiani, a 100% Cabernet which I think is (as wacky as it might sound coming from someone who you'd think would scoff at the idea of Cabernet from Piedmont), pound-for-pound, one of the great old-fashioned Cabernets on the market.

But back to the Barolo.  Every time his importer Jan d'Amore is in here, Roddolo always comes up during the discussion.

'When is the new vintage of Dolcetto (or Barbera or Nebbiolo or Cabernet) arriving?' I'll ask.

When the topic was the Barolo, the 'not sures' kept coming for a while.  Especially when chatting about this 2011.

Yes, that's correct, the 2011 is the current release of the Barolo Ravera from Roddolo.

2011 is a warm, generous year, but along with their flashiness and weight, the wines are also supple and polished and offer fabulous Nebbiolo character.

And that's exactly how I'd describe this Ravera from Roddolo, though I have to say that this is one of the best 2011s I've had in a while.  Granted, I haven't had most of the other ones since release, and this one has had the benefit of over 7 years under its belt, but the depth and grace on display here for what is still a very young wine is flat-out brilliant.

It's brawny and has nice weight across the palate, but there's also an aromatic lift to it that I find really impressive.  The structure and density are in almost perfect harmony already, and they'll both conspire to allow this wine to continue to age very nicely.

I don't want to drop the big names here (even though I'm about to with the Barbera), but I do have to say that the breadth and wisdom on display here would absolutely give some legendary labels a run for their money.

In addition to the 2011 Barolo I'm also really psyched about the 2010 Barbera d'Alba Superiore Bricco Appiani, which is more than good enough to warrant its own email entirely, but I'm pressed for time here, so I'm cramming it in.

Roddolo's Barbera is right up there in my book with other amazingly age-worthy Barberas like Trinchero, Cappellano, Bartolo, Conterno, Bovio, etc.

This dark, structured and impressively deep Barbera has all the mineral-laden pungency you expect from one of the greats and it's still just an baby, really.

To me it's awfully similar to the Vigna del Noce bottling of Trinchero in terms of overall feel, but it leans more on the red fruit side of the spectrum than does the decidedly darker Noce.  (Those of you who have been reading me for years know how highly I think of the Noce.)

This is so in its prime right now, with its seamless, muscular profile and almost bottomless well of earthy, stony Barbera nuance, that it'll be hard to lay off, but it has at least another 5-7 years of development ahead of it.

So, yeah, if you're wondering about under-the-radar producers from Piedmont that you should be really excited about...Roddolo is definitely one...