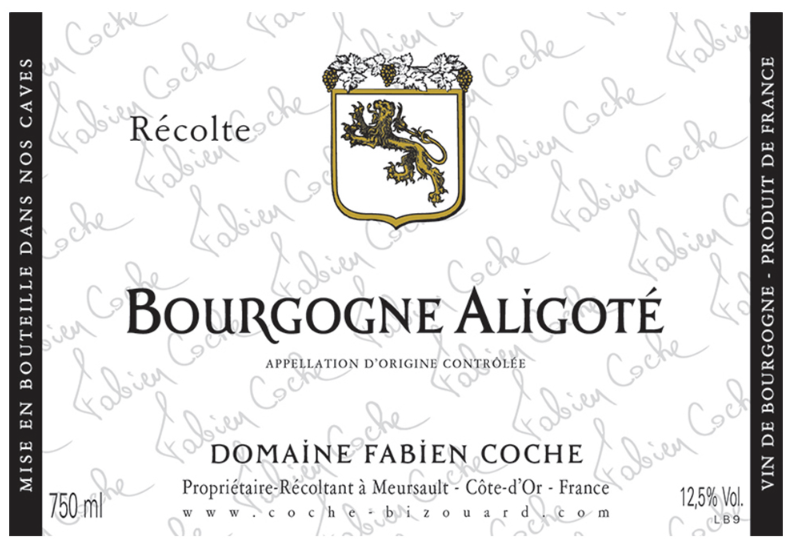 The other day, Raphael, Ray and I were tasting some wine with Josh, who reps for an importer, and he had a bottle of Fabien Coche’s Bourgogne Aligoté 2019 with him.

Raphael, who’d just recently treated himself to a bottle of PY Colin-Morey’s Aligoté, had just discovered that he was a huge fan of Burgundy’s ‘other’ white grape.  Earlier that day, he even went to far as to say something along the lines of ‘Chardonnay?...meh...but Aligoté? (makes mischievous smirk)’.

(Those of you locals who know Raphael can probably picture it perfectly...)

When Josh poured us a taste of Coche’s 2019, the room got pretty quiet, with each of us quietly doing the slow, reflective, eyebrows-raised-in-amazement nod to ourselves.

With its super-edgy vein of acidic structure, it was an Aligoté through and through.

With its creamy, citric and mineral profile, that was, at once, highly-textured, yet extremely taut and focused, it was also just a very impressive glass of classic white Burgundy that was, all things considered, an unbelievable value.

Noticing that the sample bottle was just under half-full at that point (which is often an indicator that it had been opened the previous day), I asked Josh if it he had opened it yesterday.

‘This bottle was actually opened on Sunday,’ he replied.

My eyes widened, again in amazement...

...because it was Tuesday.

Had I tasted it blind, with all of its structure, focus and complexity, there’s no way I would have guessed it was even a ‘Day Two’ wine at that point, let alone a ‘Day Three’ one.

Fabien Coche took over the reins of his family’s estate in 2005 and has been churning out some of the most underrated wines in the Cote de Beaune ever since.

On the merits of this Aligoté alone, to say nothing about the famous surname he shares, I have no idea how that’s the case.

But...when you have the chance to get super serious, focused, structured, age-worthy and outrageously-complex-for-the-money white Burgundy...why ask questions?

Though, after that tasting, our resident, newly-self-discovered Aligoté lover, Raphael, did have one oft-asked question...

’When is that Aligoté arriving???’