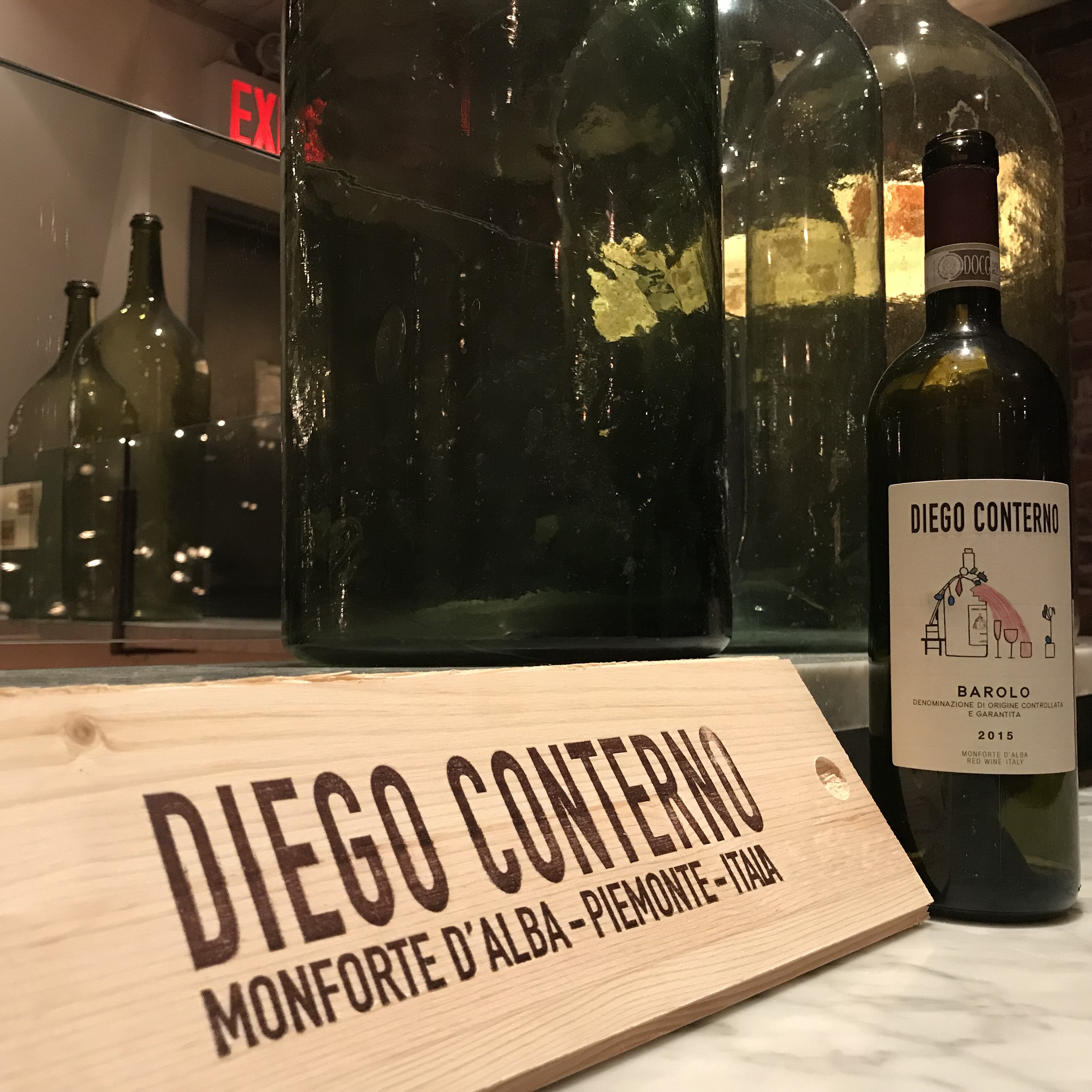 I was introduced to the wines of Diego Conterno about a year ago when Stefano (Diego's son) was in town with the importer.

I really enjoyed the pure and bright Barolo character, wrapped around a classic,
restrained structure that was littered with subtle but deep nuance and complexity.

Being that they're wines that, despite their quality, fly under-the-radar of the greater 'Barolo Discussion', I knew they were something to keep an eye on.

This past Wednesday, Stefano and I introduced them to those of you who attended the dinner we held at Il Buco Alimentari, and the enthusiasm was as I'd expected.

Now, I'd like to introduce the rest of you to these wonderful wines that represent honest, classic expressions of their respective styles and do so as relative values, at that.

So, we started with the Langhe Bianco Nascetta 2017 ($21) which is a lovely, complex and quite developed glass of white wine.  Nascetta is the Langhe's 'forgotten' grape, but it's also one of the true 'natives' to the region.

What I love about Diego's Nascetta is that it has the fragrant profile that you'd expect from a Northern Italian white, but it also exhibits a deeper color, an oilier texture and a fantastic, savory undercurrent that endows the wine with a lot more character than you expect...especially at the price point.

From there, we dove into the reds and the spicy, fragrant, wiry Dolcetto d'Alba 2018 ($16), proved to be one of the favorites of the night.  It's not as overtly berry-fruited as you often expect from a Dolcetto, and the lightness and transparency of the wine allows a ton of personality to emerge, and does so at a very reasonable price.  It was certainly one of my sleeper favorites.

On the other side of the coin, the deep, dark and rather burly Barbera d'Alba Ferrione 2017 ($19), provided a nice contrast as we passed around plates of stuffed eggplant, burrata, black rice with shrimp and sausage and crispy artichokes.  This is a decidedly deep and pungent expression of my most favorite 'every night' grape on earth, and the firm, mineral earthiness lurking inside holds all that breadth together.

The Nebbiolo d'Alba Baluma 2014 ($24) capped off the Antipasti wines nicely, offering a glimpse of the Diego Conterno 'house style'.  That style, for me, is a decidedly red and rosy expression of Nebbiolo, but one that also shows a subtle, but sturdy, rustic structure underneath all that lovely elegance.  This 2014 has already progressed to a nice spot, but isn't going anywhere fast.

Then, with some Cacio e Pepe, we dove into their two Baroli, the Normale and the Ginestra,  from the newly-released 2015 vintage.  What I loved about the two 2015s was the brightness they displayed in spite of the warmth of the 2015 vintage.  The Barolo Normale 2015 ($42), was focused, linear and aromatic, but also quite tightly wound (already shutting down a bit, was my take).  Despite the tension on the finish, though, we were all digging it.

I had speculated that going from the Normale to the Barolo Ginestra 2015 ($75), would really make it clear why I'm so excited about these wines and apparently I was right.

As wonderful as the all of the Normale were, it was definitely the Ginestra bottlings that had everyone really excited, and this 2015 Ginestra, with its shimmering, flowery red Nebbiolo fruit and dense, mineral, yet quite polished backbone was really fantastic.

The final flight of wines, 2014 Barolo Normale followed by 2012 and 2011 Ginestra, only served to further everyone's enthusiasm.

The energetic, perfumed 2014 Barolo was easily the favorite in terms of the pound-for-pound value play, while the table was torn between whether it was the 2012 or 2011 Ginestra that was ultimately the crowd favorite.  The 2011, a strikingly similar vintage to 2015, was easily the most wide-open, supple and silky wine on the table, but the 2012's understated, stony elegance really grabbed my attention too.

I made my way around the table throughout the night, taking stock of everyone's opinion about the wines...and to hear that people were just as excited about them as I was was a great feeling.

As I've already said numerous times, the personalities of Diego and Stefano's wines are super bright, and I think the future they have on the 'Piedmont Stage' is even brighter...