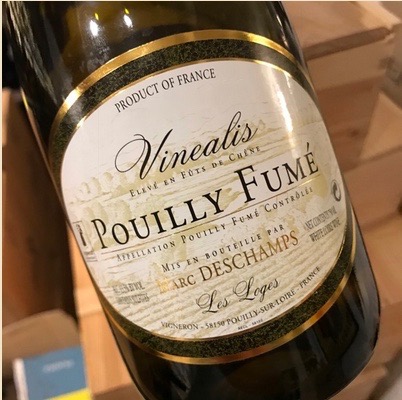 Last week, my friend Steve texted me a picture of a bottle with the words 'I need it' underneath.

'Oh, yeah that was such good stuff!' I replied.

'Let me check if they have the new vintage and I'll get back to you.'

The picture was of the 2016 Pouilly Fumé Vinealis of Marc Deschamps, one of my favorite Fumé on the market. I wrote about the stunning 2014 vintage a couple of years ago under the header 'Sauvignon Beyond Sancerre'.

The gist of it, though, is that, nowadays, everyone thinks of Sancerre as the benchmark of French Sauvignon Blanc, but that wasn't always the case.  If you were to time travel back to the '80s or before, the famous fine dining establishments here in NYC were all pouring Pouilly Fumé in Sauvignon Blanc situations.

The firmer, more serious take on Loire Sauvignon was so popular, in fact, that many CA producers began bottling wines labeled as 'Fumé Blanc' in homage to the highly aromatic, mineral and structured style of this famous appellation.

Over the course of the '90s, though, Sancerre began to take over.  I have a few theories as to why -

1) The word 'Sancerre' rolls nicely off the tongue, allowing even the casual wine drinker the chance to order a glass of wine with an air of sophistication.  (Keep in mind that, at the time, French wine was, by and large, still a complete mystery to the casual American wine drinker.)

2) Not only did the word make you sound fancy in a crowd, but it was also really easy to remember.  Which leads me to...

3) Pouilly Fumé was perhaps most 'done in', in my opinion, by the existence of Pouilly FUISSÉ, the wine from the Mâcon department of Burgundy that's made from Chardonnay.  So, when faced with the challenge of remembering which one was the crisp, mineral, aromatic Sauvignon and which one was the rounder, weightier Chardonnay, it was much easier to fall back on good ol' Sancerre and be more confident in what you were going to get.

Now, I do love a good Sancerre, and I totally get why it's become so popular, and, of course, why people are so comfortable ordering it...so, please don't misinterpret me.

The rise of Sancerre, though, like the rise of Rosé, has led to an explosion of, to put it bluntly, high-volume garbage wine.  I can't tell you how many times I've asked for a 'taste of the Sancerre' at a catered event or party, and then quickly order a beer.

Anyway, enough of my self-congratulatory theorizing...

While there are perhaps other wines that could be labeled the pinnacle of Fumé, like Didier Dagueneau for instance (even though they technically aren't 'Pouilly Fumé'), you're talking about $100/btl there.

All of Deschamps' offerings are classic, structured, chiseled and finely detailed Fumé, and all of them are very fairly priced - not just against Dagueneau, but against just about every Sancerre on the market too.

Inspired by Steve's enthusiasm, and knowing that I'd wanted to make some Spaghetti with Scallops and Clams over the weekend, I dusted off a bottle of Deschamps' 2014 Pouilly Fumé 'Champs de Cri' that I'd had sitting here at the shop in the pile of boxes all labeled 'MATT'.

(All of the 2014 Vinealis sold out in that original offer before I had a chance to snag one, so I'd had to lay down a few of the Cri, instead.)

It was soooo good with the pasta, and drinking right in its sweet spot, too.  I do plan to let the last bottle I have sit for another year or two, though, because there's certainly no rush on it.

The Vinealis, however, is Deschamps' top wine, a special cuvée made only in great vintages, and only from the oldest vines in the Champs de Cri vineyard.  It spends six months on the lees and 8-12 months in old barrels, imparting even more depth, texture and longevity to it.  As good as the the Cri is, the Vinealis is on another level.  With that extra level of texture, it doesn't have to just be a Summer sipper/seafood companion, either.

It's got more than enough gravitas (especially after some good cellar time) to stand alongside just about anything you can throw at it...all year round.

I challenge you to find a bottle that delivers this kind of classic Sauvignon aromatics and stony, flinty complexity with this level of broad, textured mouthfeel and that will age this well for this amount of money.

This 2018 is, yet again, a serious, sophisticated Sauvignon stalwart and, all alliteration aside, it deserves a spot at your table, ideally after spending a year or two in your cellar.