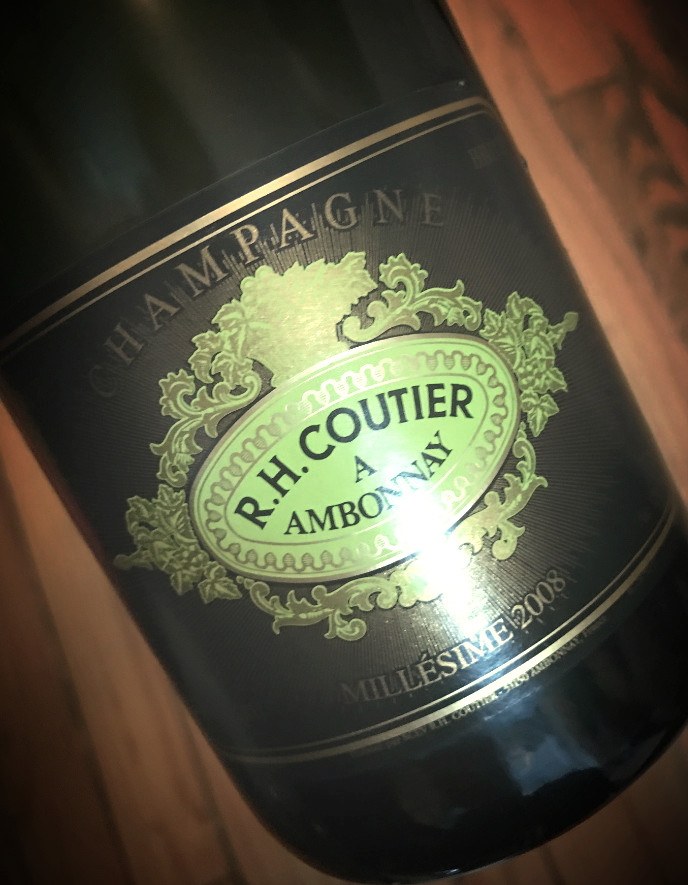 Back in February, the venerable staff of MCF (all four of us) went out to grab dinner together.  We headed to Cookshop because I love the restaurant and, Richard Luftig, the beverage director and I have about as much in common when it comes to wine and our opinions of it as any two people in this business.

Those of you who know him know what a dedicated and genuine, if opinionated, guy he is.

He told me to bring up some interesting stuff so we could all share it and discuss.  In addition to a couple of special reds, I grabbed a bottle of Coutier Brut Grand Cru 2008 from the fridge.

I'd been a Coutier fan for a while, but hadn't had this 2008 yet.  Knowing the producer and vintage, though, I had a hunch it would be pretty fantastic.

We showed up and sat down and Richard came over to chat.  After a bit, he disappeared with the bottles to open them.  When he returned the first thing he said was 'man, the reds are great, but that Champagne is fantastic!'

First whiff revealed exactly what he was talking about.  The nose was rich and developed, with a beautifully nutty and floral complexity.

All of that continued on the palate as well.  The creamy, toasty, nutty richness intermingled with elegant pink and white fruits and culminated with a mineral finish (so characteristic of the fantastic 2008 vintage) that bound the whole package together.

It showed the development and breadth across the palate that you would typically get from a fully mature vintage bottling at double the price.

In a way, it reminded me of a "poor man's" version (as much as I despise that term) of a mature bottle of Comte´ de Champagne, which is certainly saying something.

Even though it's predominantly Pinot Noir (75%, with just 25% Chardonnay), to me, its toasty/golden character almost suggests that the blend is the opposite.

This is a stunning glass of proper vintage Champagne that checks boxes that you only expect something much more expensive would.

All night, I kept coming back to it and, needless to say, the remaining bottles on the shelf at the shop didn't last long as we all sold it to anyone who would listen.

The good news for today is that there is a new shipment landing in NYC very soon and we've laid claim to a good chunk of it.  That 'chunk' isn't all that much, though, so even though there's one more shipment arriving in the Fall, I wouldn't hesitate on this one.

I mean, who doesn't want a glass of textbook vintage Champagne on a warm Summer night?