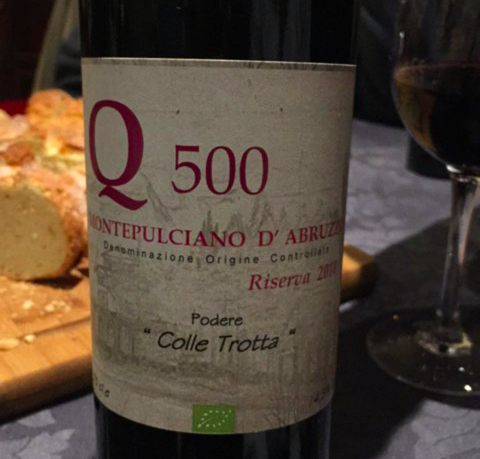 So, the other week, in my offer for the Le Ormere Greco di Tufo, I referenced the conversation we had last September in the van on our long ride from our lunch appointment at Emidio Pepe to the town of Loreto Aprutino.

It began as a convo about the unsung white varietals of Central and Southern Italy and other such things that Italian wine geeks spend time talking about on long van rides...seriously.

As I've said in this newsletter many times, things like Fiano, Grechetto, Verdicchio, etc., in my opinion, have the ability to take their places alongside the great white grapes of the rest of the world in terms of quality and age-ability...if only people believed in them a little more, that is...

And that's where the conversation went...to me saying that there's no reason that a wine made from, say, Umbrian Grechetto shouldn't be held in the same esteem as a wine like Chablis.

All it takes is a local vigneron, whose believes that their terroir is capable of more than just easy, fresh 'drinking' wine (which there's nothing wrong with, of course) and for said vigneron to set out to achieve something more.

(There are people doing this already, for sure, but more on that later.)

My point was, there seems to be a pattern of what the greatest wines on earth follow.  It all starts with great raw material, obviously...no truly great wine can be made with ordinary fruit.

Then, it typically involves, meticulous, careful and traditional winemaking and, ultimately, ageing in a wooden vessel of some kind, ideally a large one, ideally an old one...for me, that is.

So, with that in my mind, somewhere in the conversation I said 'there's no reason you can't take great Grecchetto and vinify it the way they do top-level Chablis, and create something profound...'

Ernest heard that as me saying 'make Grechetto that tastes like Chablis...', but what I meant was that, if you treat Grechetto with the same level of respect that a Burgundian treats their Grand Cru harvest with, you're gonna get something really special.

Then the conversation shifted to red wine and, again, I said 'look at the greatest wines in Italy - Barolo...great fruit, great terroir, long, traditional fermentation, long aging in BIG, OLD barrels.  Brunello - great fruit, great terroir, traditional fermentation, long aging in big, old barrels...the formula for someone to make, say, Montepulciano or Gaglioppo or Negroamaro or Cannonau that way, is right in front of us...'

Ernest, who's a big believer in the beauty of neutral vessels like concrete, was a little hesitant to agree with me, and I see what his point is.  You get more of the aromatic finesse and precision along with quirky grooviness to come out when you're dealing with that kind of winemaking.  What you don't always get, though, is the broad-shouldered, refined and built-for-the-long-haul wine you get from extended elevage in wood.

It was shortly after that that Beniamino pulled up in front of the ancient stone winery of Colle Trotta, in the village of Penne.  What was immediately clear as we got out and introduced ourselves to proprietor Maurizio di Nicola, was that this grand old farmhouse winery had just barely survived the great Abruzzo earthquake of 2009.

Some places were patched, some were still in pieces.  We walked into the beautiful, but clearly recently renovated winery to taste with Maurizio and his consulting winemaker, Professor Leonardo Seghetti, of the university of Teramo.  He's a big deal - the local sage of all things agriculture, from Olives to Grapes, and carries a lot of weight in the region.  Sitting with him while he explained each wine, with his mischievous, side-eyed grin was an experience in itself.

We made it through their freshly bottled new releases of the 'Q500' (a reference to the fact that all of the vineyards are at 500 meters or higher in elevation) Cerasuolo, Passerina and regular Montepulciano...all of which were delicious - fresh, nimble, open, honest and wonderfully quirky...all aged in concrete...

Then a pair of unlabeled bottle came out, both clearly Montepulciano...but also clearly something more substantial.  I'm not kidding when I say that it was as if someone had heard exactly what I was talking about in the car in terms of taking great Montepulciano from great vineyards, vinifying it super-traditionally and then aging it in big old vessels...oh, and in this case, aging it bottle for another 10 YEARS.

The only problem in terms of my 'theory' was that this substantial, complex, developed and still vibrant decade-old wine was the 2008 Montepulciano Riserva that was raised in concrete...not wood.

It was burly, dark, intensely mineral, iron-y and leathery, bit was also precise and elegant, and there was a sense of aromatic freshness to it, as well.  It was honestly one of my favorite Montepulciano that I can recall.

Ernest then explained to us that it was the last vintage of the Riserva to be bottled from the cement tanks before they were destroyed along with the old winery during the earthquake.

The next unlabeled wine was the 2010 Montepulciano Riserva, which, unlike the 2008 had been raised in large old barrels.  It was, for me, equally as compelling a wine.  It was broader, slightly richer and more textured, but with the same level of mineral/leather/deep earth, and the strapping, polished tannins were about 1/3rd of the way to full integration, giving it a touch softness at the edges so as to allow even more tertiary nuance to peek out.

They were both fabulous, complex and deep, but the 2010 just had a tiny bit more of that 'Steakhouse' texture to it.

After a few wide-eyed and enthusiastic cycles of swirl, sniff, sip, repeat, I shook my head in delight, took a deep breath and then looked up to Seghetti's mischievously grinning face giving me a nod of approval, which (I think) I returned.

For me, it was proof that, yes, my 'theory' was correct, but it was also a great reminder for me that, even though the 'old wood formula' is tried and true, there's certainly more than one way to make a great, structured and ageworthy red from one of Italy's noble varietals.

I immediately began bugging both Ernest and Mike about bringing both wines in, which they both assured me they would figure out a way to...

...and today, I'm over the top excited to share this really special wine with you...perhaps the last version of Riserva made this way from Colle Trotta.

It's the Montepulciano that you didn't know you were waiting for, but...just trust me...you have been.

...then go get some kind of wonderfully cave-man-y hunk of lamb or boar or beef and roast it over a fire, and drink this.

You will find yourself respecting Montepulciano on a whole new level...