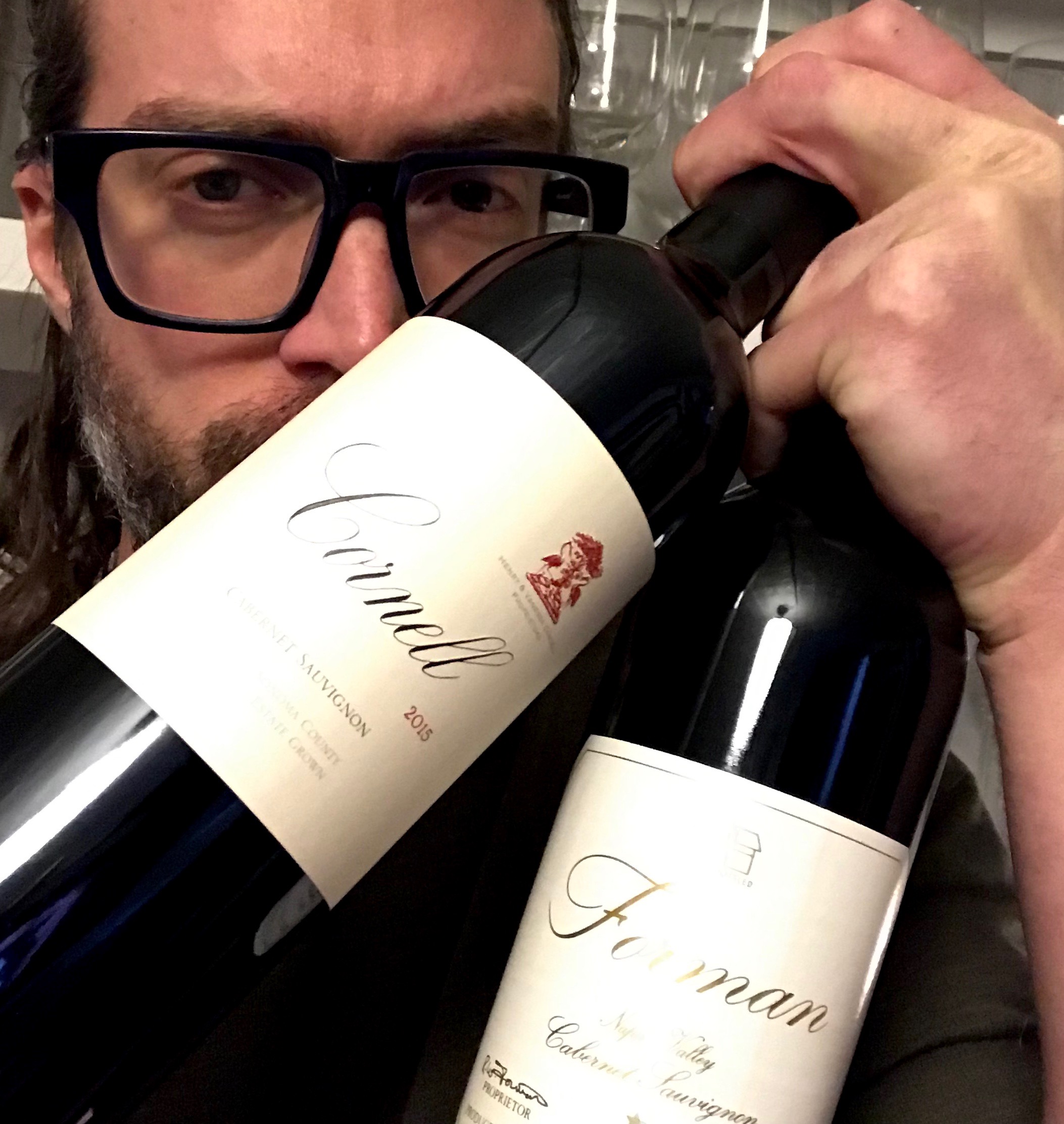 I had dinner with my friend Ray the other week.  He's been a longtime customer of mine, but nowadays we mostly do dinner on a rather regular basis, and we always go to places we can bring our own.

Over some nice Japanese small plates, we had some Champagne, some white and, once we got into the meat skewer/fried chicken portion of the meal, the bottle I brought along - a 1991 Forman Cabernet Sauvignon.

Now, Napa Cab isn't what I'd usually bring to have with such cuisine, but I had just acquired a case of the 1991, and wanted to try a bottle before I put it up on the shelf.  Plus, I really like old bottles from these 'classic' Cali producers, with their restrained, aromatic, firmly structured/mineral style.

It was one of those wines that was sooo good, in such a perfectly mature drinking spot, that, frankly, it would have been nice with just about any cuisine, but it was fantastic with what we were eating.

It got me thinking that I should offer some of the current release Forman Cab, because they've been making the same style of glorious, old-school Napa Cab all along.

It also got me thinking about the 'renaissance' of classic Napa wines, if you will.  While the big, luxurious wines from the valley have waned somewhat in their appeal among collectors, they are still a force in the CA wine world, so perhaps using the words 'renaissance' and 'Napa' together sounds a bit odd.

What I am referring to when I say that, though, is how the folks who'd abandoned high-end Cali wine to pursue regions like Burgundy or Piedmont, have been quietly 'rediscovering' the 'classic' Napa Cabs - Mondavi, Forman, Mayacamas, Heitz, Diamond Creek, just to name a few. - aged examples of which, all things considered, are pretty fantastic values right now.

(And, of course it's not limited to Napa, either.  Obviously something like Ridge Monte Bello fits right in there too...)

It also also got me thinking about the current vintage of a relative newcomer to the scene - Cornell (yes, they're technically just over the line on the Sonoma side of Spring Mountain, but, in terms of style, they're right there with the any I mentioned above).

What I mean when I say 'classic' are the wines that, well, had a classic, restrained style and sort of fell out of fashion in the 90s as the bigger, more powerful wines began to steal the attention of critics.

I don't mean to paint with a broad brush here, but, let's just say that the chiseled, restrained, aromatic style has been enjoying a comeback among drinkers, as have the producers who've stuck with it all along - like Forman.

And many new producers, like Cornell, are striving for, and totally nailing, that style, as well.

So, while $100+ Napa Cab isn't what you normally read about in this newsletter...it's something I really do enjoy, both when it's young and vibrant, and, especially when it's perfectly mature.

You'll just have to put in the time on these!

The current vintage of the Forman is another classic in the making.  It's got everything you've come to expect from a great vintage of this wine - finesse, aromatics, dark Cab fruit and that refined, mineral nuance interlaced with all of it.  It's lovely already, but it's going to live a long and happy life, should you be able to afford it that by keeping your hands off, that is...

Cornell's Cabernet, from the hands of winemaker Elizabeth Tangney and consulting legend Francoise Peschon, has, in just a few years, become one of my absolute favorite wines in California among the 'top-tier classics' - right up there with Forman, Mayacamas, et al.  What I especially love about the Cornell, though, is the fact that it perfectly blends restraint and aromatic finesse with the chiseled, iron-y/mineral focus and how the deep, powerful dark fruit never oversteps.  The 2014 was lovely, and quite a hit here, but the 2015 raises the bar.  While it leans decidedly more towards power, it does so with near-perfect balance, and the refined tannic structure and aromatic complexity tease at the nuance that lurks inside this wine, just waiting to emerge as that firm, dark fruit begins to recede.  If you love Cabernet, you need to get your hands on some of this while you still can.  Seriously...