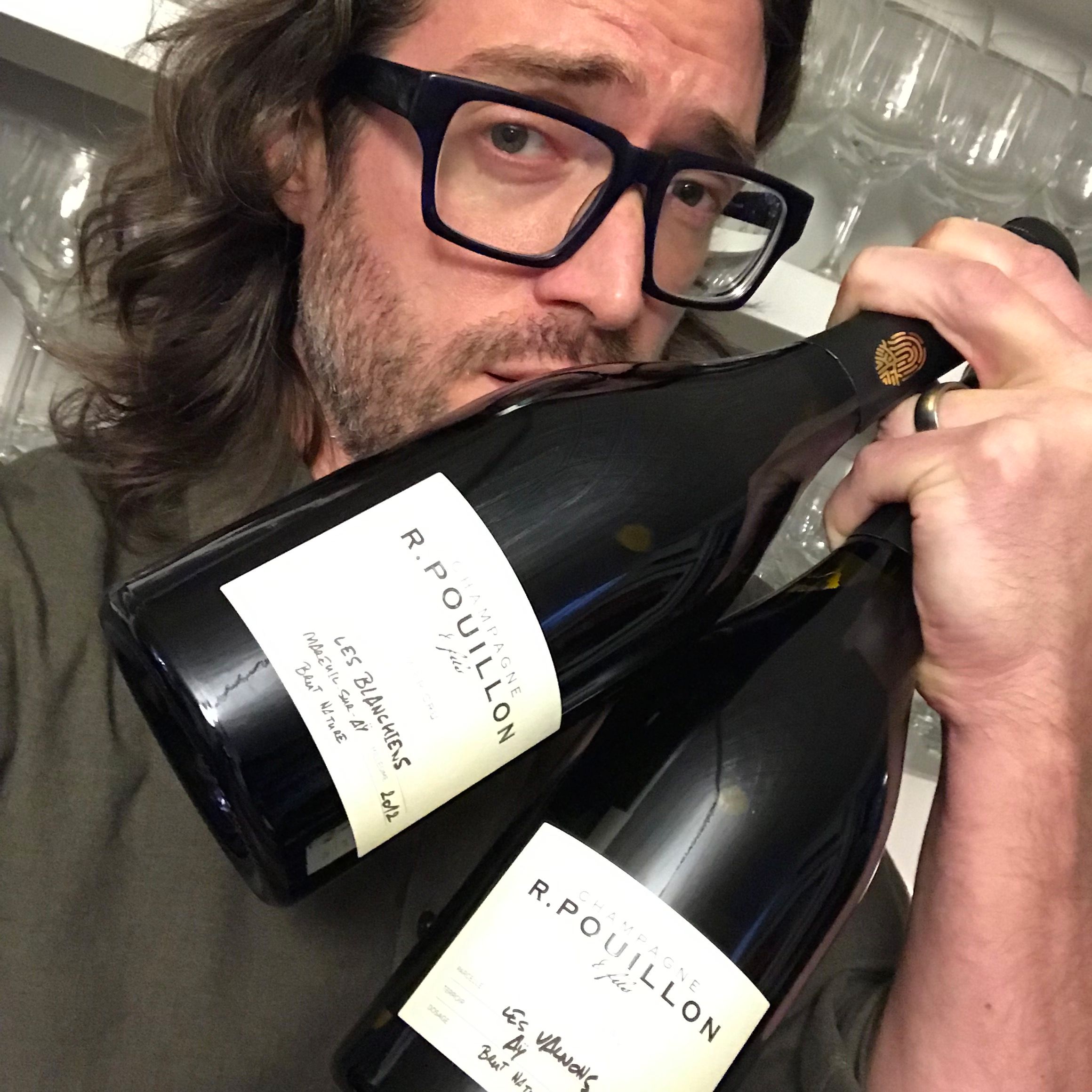 Champagne Pouillon: It's About Time (and also right on time...)

A couple of Decembers ago, while offering the Champagnes of Ruppert-Leroy, I mentioned that 'my other favorite' grower/producer (along with R-L) was Pouillon, and that 'I'd be sending an offer (for Pouillon) soon...'

I guess by 'soon' I meant two years later, but regardless, here we are.  Heading into Thanksgiving with a fresh batch of wines from a producer who's doing what are, for me, some of the most wonderfully racy, articulate and (above all) food-friendly Champagnes on the market.

Danny Weber, who sells me these wines, was in the other week to show me the new lineup, and he was super excited...it was quickly obvious why.

These were a set of stunningly delicious, precise, drop-everything-and-take-a-bottle-to-omakase bubblies that got my attention from the get-go.

He started things off with the Brut Reserve NV ($49, base 2016), which was probably the best edition yet of this wine that's become an on/off staple here at MCF.

It had that lovely, broad, lightly-oxidative richness that I always love about this wine.  What I really love about it this year, though, is that it's even more focused and mineral through the core.  As things go for 'entry-level' bottlings, this continues to be one of my favorites.

Then we moved into the two single-vineyard wines, and that's where Dan's enthusiasm jumped a level.

After a brief discussion about why he enjoyed the generosity of the 2012 vintage while the 2013s seem to be where most of the current attention lies, we jumped in.

First off, starting in 2012, both wines are now Brut Nature rather than Extra Brut, which I think was a brilliant move.  The level of clarity and character shines through even more now, and both wines have even more of a lovely edge to them.

The 2012 Brut Nature 1er Cru Les Blanchiens is a wonderfully textured and persistent 50/50 blend of Pinot Noir and Chardonnay from a Limestone/Clay plot of the same name in Mareuil.  The fruit is a lovely expression of darker berries, while the savory/stony elements keep things balanced.  This is certainly the 'richer' of the two but, on its own, this is as detailed a wine as you could ask for.

Then we moved on to the 2012 Brut Nature Grand Cru Les Valnons (always my fave) and things got even clearer...

The Valnons is a pitch-perfect wine of 100% Chardonnay that is so transparent and detailed and lively and mineral and...well...clear...

The Les Valnons Froid Cul, the full name of the vineyard, is a Grand Cru slope in Aÿ that's actually famous for Pinot Noir, so a Blanc de Blancs from the site is a true rarity.  Like with the above, the tension between the bracing, mineral core and the textured, savory fruit that surrounds it is brilliant...but this one is way further down the 'edgy' path.

There's nothing quite like a bracing, driving Blanc de Blancs, but one with this much character at this price is even more of a treat.

I actually have a few bottles of the lovely Extra Brut Valnons 2010 as well and, I'll confess, I've already drank two of them myself...one at Omakase Room by Maaser on Bleeker St (which you should totally check out if you haven't) and the other a few days later (because the first one was so good) at a friend's place.

The leaner 2010 vintage is already showing great progress and, while it's certainly delicious, it did the job of getting me really excited to see how the 2012 matures because, with the slightly-weightier profile of 2012 and the added 'edge' that comes with zero dosage, I think the 2012's gonna be an even more eloquent wine.

When we were done tasting, I said to Dan, 'I know I've been circling around an offer for these wines for a year now...'

'A year?' he interrupted.

'Yeah, wasn't that last year that I said I'd offer a lineup?' I asked.

And, to add to that, I'll say it's right on time because, as far as Champagnes that could easily handle the spectrum of flavors on the various Holiday tables you're about to be encountering go, I can't think of a better trio...