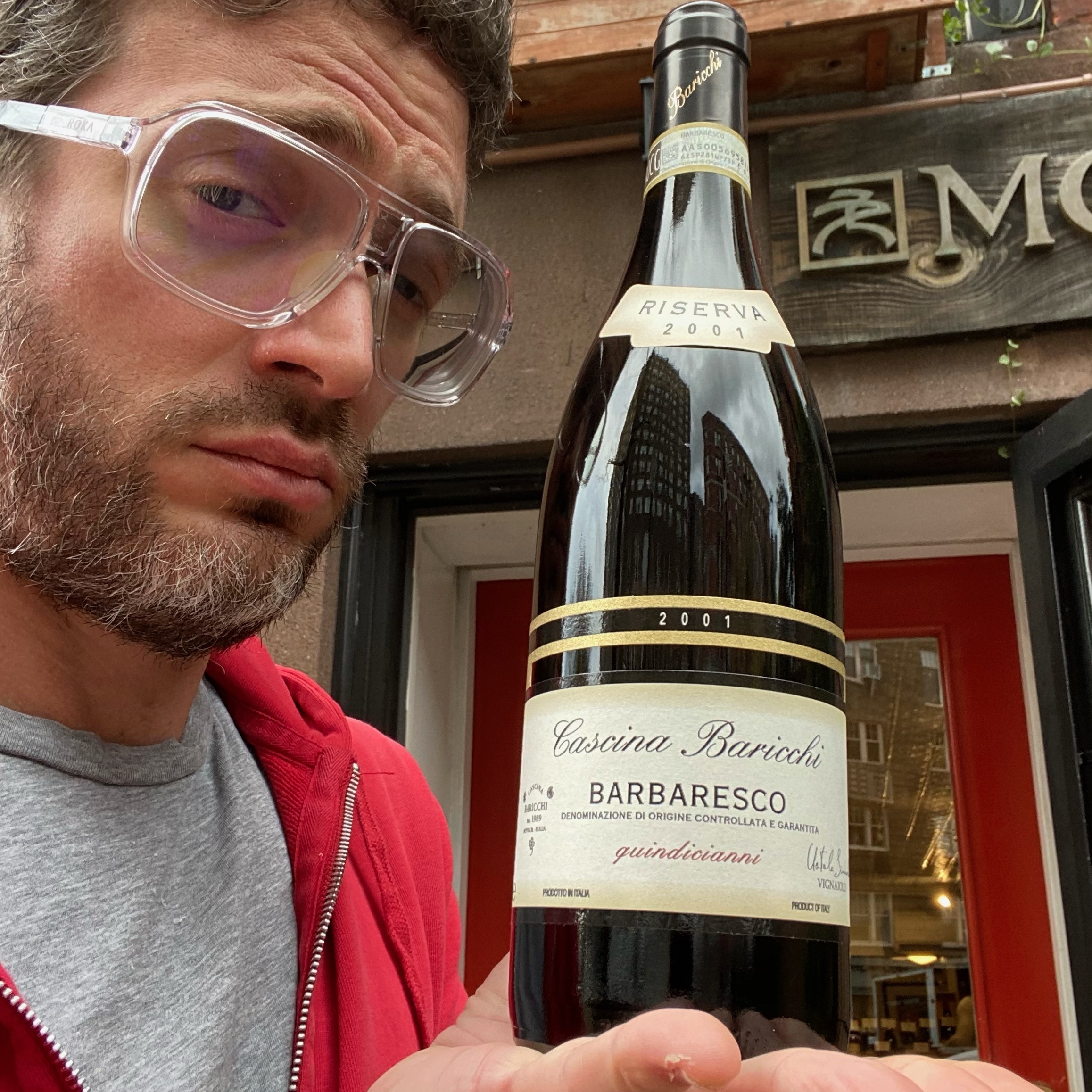 Right around this time last year, I sent the below offer for the wonderful Barbaresco of Cascina Baricchi, a producer who needs to be on your radar.

I thought that today would be a perfect time to offer them again because a) it's prime Nebbiolo season, b) I just acquired the last of the importer's NY stock and have them in the shop and c) I got them at a nice price, which I'm going to turn around and offer to you.

If you remember the wines, scroll to the bottom and check out the amazing pricing.  If you don't remember (or don't know) the wines, you can read the story below.

Either way, Barbaresco of this quality, from a protégé of Giacosa, at the price I can offer today, are something you have to jump on.

So, the other week, we did an in-store preview tasting of the three fabulous Barbaresco of Cascina Baricchi, and to call it 'eye opening' would probably be an understatement.

Each of the three wines were stunning examples of classic, classic Barbaresco, showing an intoxicating purity of red Nebbiolo fruit, but with an equally compelling rustic structure that takes them even further down the old-school path.

Not only are these delicious examples of Barbaresco, but there's a very cool story behind them as well.

Natale Simonetta set out to turn his family's estate into a Barbaresco producer when he was just 24 and, ultimately, found himself under the tutelage of Bruno Giacosa himself.

Giacosa, known forever as one of the all-time greatest selectors of fruit, had always worked with a specific strain of Nebbiolo known as Nebbiolo Rose (no relation to pink wine) - which offered an exceedingly light and aromatic expression of Nebbiolo.  He used it to add lift and elegance to his Barbarescos.

In 1980, Giacosa presented Natale with the ultimate gift, the chance to work from the historic vineyard of Cassase, an old-vine plot planted with the Nebbiolo Rose in Neive, but on one condition...that he make a Barabresco exclusively from the Rose, something nobody had done.

The result is the Barbaresco Riserva Rose delle Casasse (2012) and it's one of the most singular expressions, not just of Barbaresco, but of Nebbiolo you'll encounter...

The fruit is so dainty, the profile so perfumed and lifted, the backbone so focused and mineral.  It's unmistakably Barbaresco, but just...the ultimate expression of elegance within Barbaresco.

Here, the elegance is still king, but there is a definite shift in terms of weight and spectrum.  These are indeed burlier than the Casasse, and the expression of Nebbiolo is more classic Barbaresco.  In fact, there is a distinct Giacosa-ness to these, but I'd say they're slightly more rustic in texture (that's in a good way, of course).

The 2013 Riserva is just straight-up rosy, tarry, earthy deliciousness - elegant, but still muscular...pure and pleasurable, but still very structured.  There's a whole lot to like right now, but this is by all means a wine that will offer all kinds of haunting Barbaresco nuance some 15-20 years down the line.

The 2001 Riserva Quindicianni is flat out stunning.  This is a wine that spends 5 years in large barrels (24 mos in 500/700 liter botti, followed by 36 months in 2000 liter botti) and then held to age for another 10 years in bottle.  So, yeah, the stunningly classic, benchmark 2001 vintage is current release (with fresh corks, of course).

It's tempting to think of this as 'ready to go', but while there is plenty of depth to this rather monumental wine, it's still an adolescent at best, though a few hours in the decanter will offer a wonderful night of drinking.

I mean it when I say 'monumental', though...this wine has it all.

Anytime a 'new' Barbaresco producer lands in the US, it's easy to have a 'don't we know them all already?' type of attitude.

Then you taste a 'new' Barbaresco producer like Baricchi and all you come away wondering is 'how the @*#% didn't we know about this one already?!"