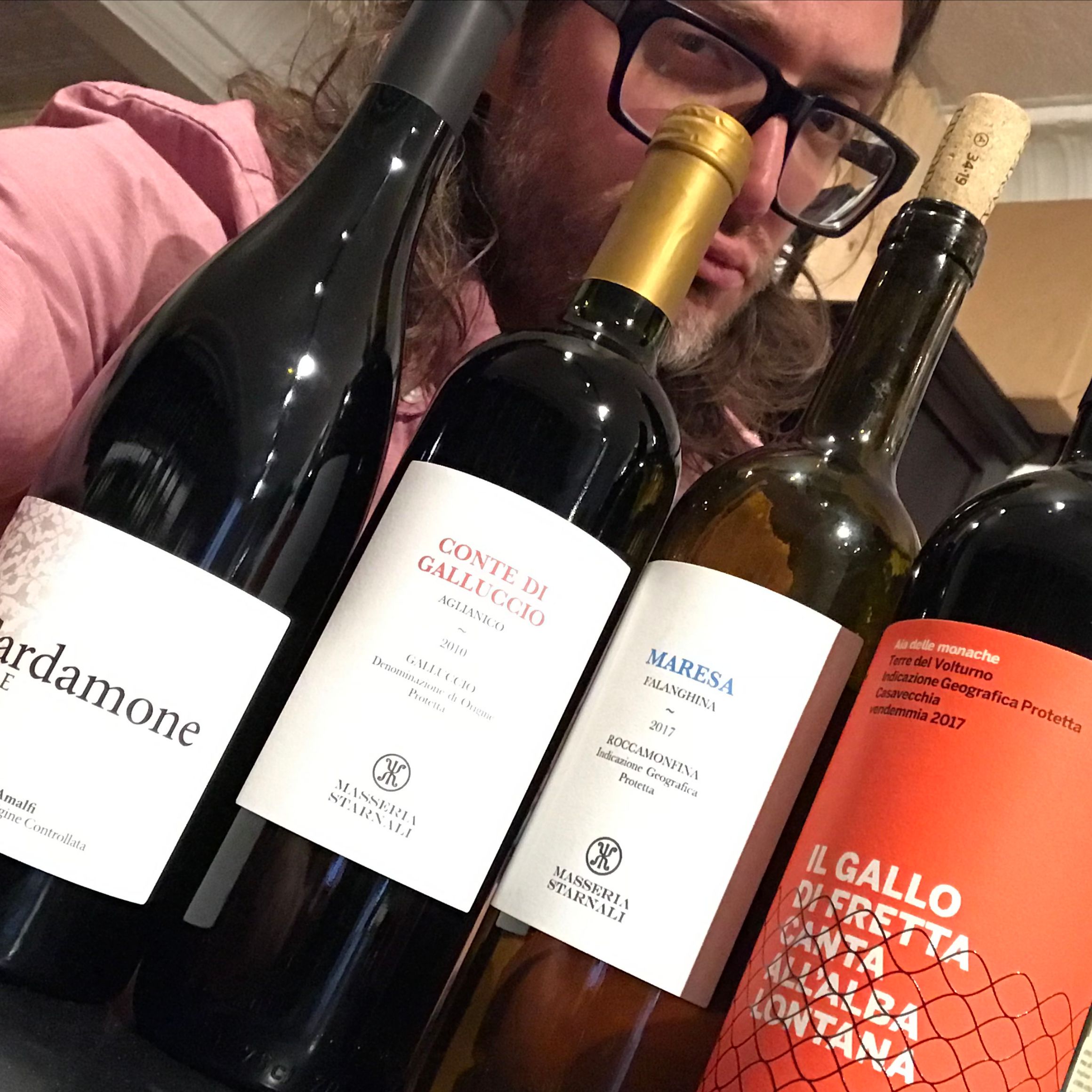 Yeah, yeah, I know...I just wrote about an Aglianico the other week.  So sue me...but to be fair, that one was an Aglianico del Vulture...from Basilicata...

I just received a bunch of new stuff from Campania, though, and I'm really excited about them.

What's super cool here, though, is the fact that, on the red side, we have not only an Aglianico (and a really good, aged one, at that), but we have two of the region's lesser-known varietals, Piedirosso and Casavecchia.

This newsletter was originally going to be 'Campania Three Ways', but I also have a super cool and delicious orange wine made of Falanghina arriving, as well, so...you know...why not?

So, let's chat about the differences between Aglianico, Southern Italy's (and Italy as a whole, I would argue) truly noble varietal, Piedirosso and Casavecchia.

There are a few identifiers one can point to, but for me it's largely a textural difference...a contrast in the 'shape', if you will, of the wine in the mouth.

All of them have that dark, mineral, volcanic wild streak to them, and all of them are wines that have tannin, as well, but that's where I typically find the defining elements...in those tannins.

For whatever reason, I've always visualized them using trees in my mind.

Proper Campanian Aglianico, with its brawny, strapping tannin, is like a huge oak tree, with a massive trunk that supports long, heavy limbs.  It's firm and persistent, but also elegantly, beautifully put together.  Masseria Starnali, in Roccamonfina, a good 50 miles North of Naples, is a biodynamic farm that produces some pretty fabulous wines that I was only recently introduced to.  Today's wine is their top red, the Conte di Galluccio 2010, and it's about as good an example of this stronger, weightier style of Aglianico as you'll find...that doesn't say Taurasi on the label, that is.  The fruit is already advancing beautifully and the long, muscular tannins have softened nicely, allowing that deep, secondary nuance to emerge.  For a sturdy, complex wine to go along with some good old comfort food on a cold night, this is pretty fabulous stuff, and is a great example of what to expect as this noble grape ages.

Piedirosso, with its racy aromatics, always makes me think of a pine tree (not in flavor, mind you...in shape).  It has a backbone that is nearly as tall and rigid, but like your garden variety evergreen, it's much narrower in girth, and the superfine, but very present tannins have a completely different texture.  To me, they're very short, with a kind of invigorating prickle to them...a million little pinpoints...like all those short, pointy needles on those long skinny branches.  From Reale on the Amalfi Coast, whose Piedirosso Rosato 'Getis' so many of you enjoyed back over the Summer, comes the red counterpart, the Cardamone 2016, a textbook example of Piedirosso (and a bit of Tintore, too), with its zesty, spicy aromatics and invigorating texture.  The balance between full flavor and lively freshness is just right.

Finally, there's the oft-forgotten Casavecchia grape, which today comes to us in the form of Aia delle Monache's Terre del Volturno Casavecchia 2017, one of the best mono-varietal examples of this grape I've had maybe ever.  Here we have the same mineral-dense dark fruit, the same smoky, volcanic nuance and the same wild spice, but this is by far the softest, most generous of the three, as is Casavecchia's nature.  It's still nice and feisty, with tons of personality, and the tannins are there, but they're buried much deeper inside the dense, yet supple fruit.

If Aglianico is the massive, structured oak tree, and Piedirosso is the lively, aromatic evergreen, the Casavecchia is, perhaps, I dunno, less of a tree, and more of some kind of fluffy, soft-leafed bush.  It's comforting and enjoyable and easy to please, but somewhere buried deep withing the puffy, lush exterior lies a backbone that holds it all up.  To call it a 'gateway' wine to Campania kind of makes sense, but would also, in a way, diminish what it has to offer.  Either way, though, this is super fun and really delicious stuff.

Finally, even though it's somewhat unrelated, but just because it's here and delicious, I'd also like to offer out Masseria Starnali's super yummy 'skin contact' Falanghina, the Maresa 2017.  Medium-orange in color, the best part of this wine is the way its 'orange-ness' doesn't obscure its 'Campania-ness' or 'Falanghina-ness'.  The tropical fruits, so characteristic of Falanghina, are taken to a new level of depth and texture, and the spicy/smoky volcano-y nuances are still really present underneath it all.

Incidentally, the number of younger people coming in and asking for 'orange wine' these days is both surprising and very welcome.  As the ideas and philosophies behind natural wine and its varying styles continue to push into the mainstream, I guess it only makes sense that 'orange wine', perhaps its most iconic iteration, becomes its most popular one, as well.

Seeing wines like this become the go-to request over insipid, mass-produced 'supermarket' brands, is the kind of thing that warms the heart of your friendly, neighborhood purveor of adult beverages.

All wines available individually and discount 10% on a case of 12 (mixed or solid).