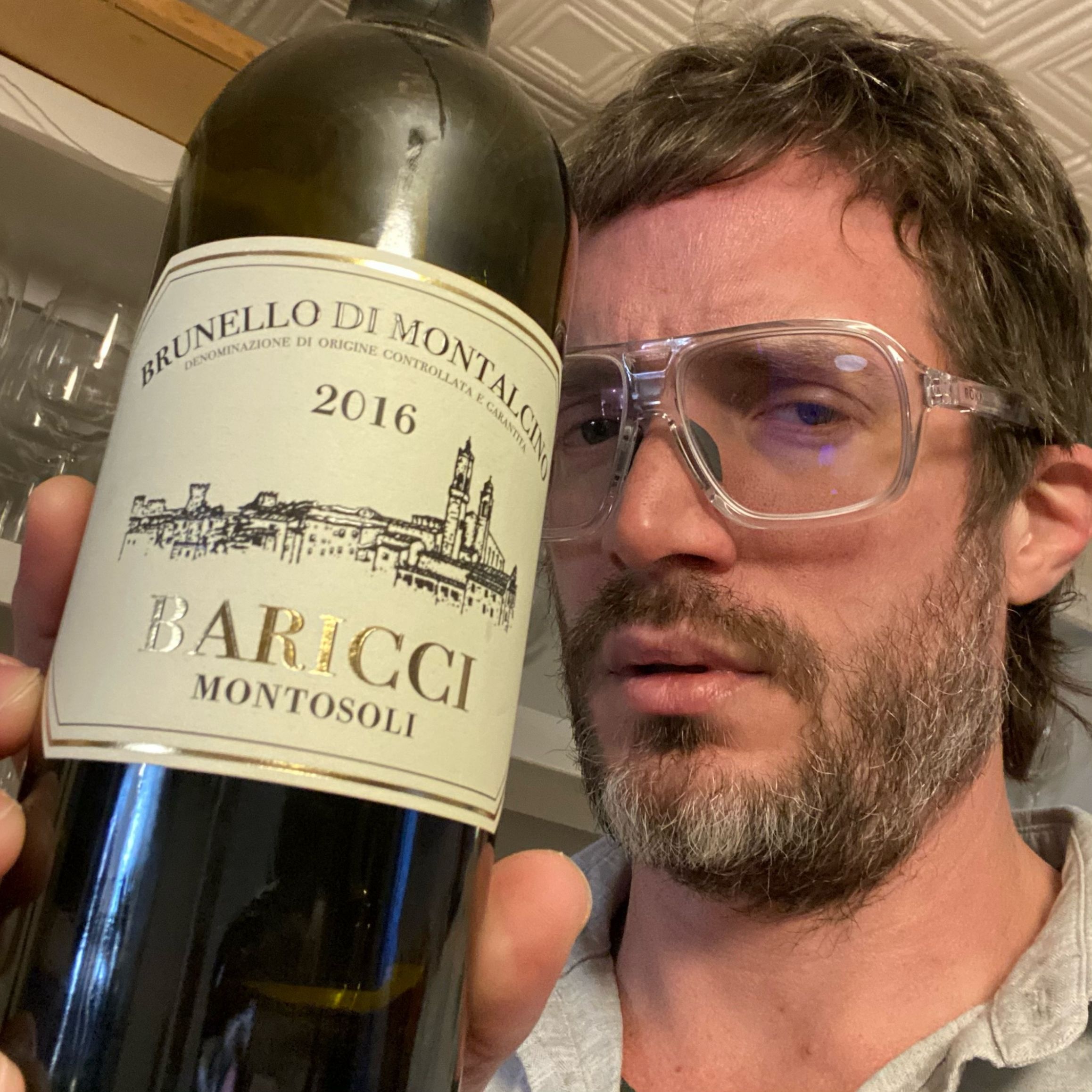 Francesco Buffi is the grandson of the late Nello Baricci.

He's also a sales rep for his family's wines with their NYC importer, Vias.

A few weeks ago, he reached out to me to let me know about the new releases of Baricci, something I'd been more than eagerly awaiting, to put it mildly.

More than that, though, he wanted to let me know how grateful he was for how I featured his family's wines last year and, of course, how much of them we ended up selling.

It was touching and very much appreciated.

(To read that offer from last year, detailing my love for Baricci, CLICK HERE)

(...and, yes, apparently the release of Baricci coincides with me getting a long overdue haircut...)

He dropped by last week to give me a 'first look' bottle of the gorgeous 2016 Brunello.  As we tasted, we chatted some more and it became pretty clear that we have a very similar approach to wine, in that we sell what we love, without regard to trends or popularity.

Above all, we'd rather let the wines we select (or, in his case, the wines he makes) speak for themselves and, if people agree with us, that is the highest level of satisfaction.

The 2016 was gorgeous, though very young.  To be fair, it had just arrived from Italy, so it was certainly still in 'shipping shock' mode, but, even with that in mind, the classic, elegant brilliance of Baricci was more than apparent.

Let me emphasize those two words, as well - classic and elegant.

Baricci's wines hail from the famous Montosoli cru in Montalcino, on the Northern side of the hill where the chalky marl/clay soils impart a fragrant elegance that's really unmatched in the rest of the zone.

Baricci and Montosoli go as much together as do, say, Cascina Francia and Conterno - the producer and the Cru are defined by each other.  Even though others make wine from Montosoli, all of Baricci's wines are made from this hallowed plot.

The Rosso di Montalcino is made from the youngest vines, the Brunello from the best, oldest vines.  And, for just the third time ever, there is the Brunello Riserva 'Nello', which is made only from the very best of the old vines and only in the very best vintages.

So we're lucky to have that going for us...

Back to the 2016 Brunello - it's taut and firm, dark and mineral, and, ultimately, so perfumed and so nuanced.  It was perfectly enjoyable that afternoon while we tasted, but it then proceeded to shut down over the course of the next two days.

By day three, however, the firmness and loosened up again, revealing a broad, polished tannic frame that was hung with lovely, iron/mineral inflected dark Sangiovese fruit, with an oh-so classic softness of texture.

In other words, this is a wine that will require some serious patience, much like the gorgeous 2001 vintage I was first introduced to all those years ago.

The 2015 Riserva 'Nello', by virtue of both raw material and vintage, takes things up a notch in terms of power, density and depth, but, above all, it's still a Baricci...it still expresses the sublime without shouting.

Like a refined masterpiece carved out of solid rock, it's at once powerful, solid and finely-detailed.

Of all of the 2015 Riserva on the market right now, this is the one I'm absolutely snagging a bottle of for myself - despite the significant price jump over the Brunello Normale, it's truly special stuff.

The 2019 Rosso di Montalcino isn't ready for release yet, but Francesco was kind enough to send the last remaining cases of the wonderfully lithe 2018 Rosso (the same one you all went crazy for last year) to NY, so that we had some (emphasize some) of the red-labeled beauty to sell alongside these two Brunelli.

Quantities are, as always, very limited, but I will do my very best to spread them around, because, like Nello before them, Francesco and his family do their very best...

...so, for me, making sure as many people as possible experience their best would be...