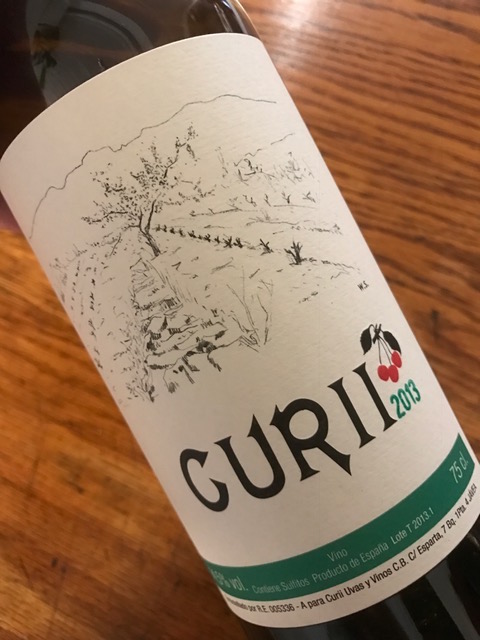 '...this wine has the depth, dimension and complexity of some of the most famous wines in Spain. It is a lot like crossing Heitz Martha’s Vineyard and Chambolle-Musigny! Great juice.'
- John Gilman

Today's wine is another great example of the 'New Spain'.

I'm not really sure where to begin with this one.  But I think the above quote is really as perfect a starting point as one could ask for.

When my friend Mike (who distributes Jose Pastor's awesome book here in NYC) was showing me some wines the other day, he made a reference to the final wine we'd be tasting and said that John Gilman called it a 'cross between Chambolle and Heitz Martha's'.

I was intrigued to say the least, as I would expect just about everyone would be.

So after a somewhat lengthy lineup of mostly Loire wines, he pulls out this bottle of Curii 2013, an old-vine Garnacha from Alberto & Violeta, a TINY producer in the Alicante zone of Valencia.

'So here it is,' he said, 'the Chambolle and Heitz Martha's wine.'

Now, whether we want to admit it or not, we're all hugely susceptible to the power of suggestion, but after my first whiff, I just started chuckling.

From my point of view, it was pretty spot-on.

What all that's in reference to are the two major flavor components of this wine - the first is the soft, wonderfully elegant/feminine red fruit (a hallmark of classic Chambolle-Musigny) and the other is a rather pronounced minty note on both the nose and palate (something that Heitz's Martha's Vineyard Cabernet has always been known for).

Full disclosure, the 'Chambolle' review was for the 2012 vintage, but he reiterated it again with the 2013, but instead of Chambolle/Martha's, he said it reminded him 'of some great, old school California wines from the sixties or seventies, made from a cross of some unknown, old vine field blend and Heitz Martha’s Vineyard.'

I see what he means there too.

So, why would you want a Spanish Grenache that tastes like a Burgundy/Cali hybrid?

Because it's really unique stuff that tastes really good.

It packs a whole lot of flavor into a rather weightless mouthfeel and, despite the French/American comparisons, the soul of this endlessly amusing wine is the essence of the 'New Spain' style.

In keeping with the New Spain theme, there is a minuscule amount of this wine, and I got just about all of it.

If you want a full-flavored red that won't knock you over the head with power, and one that's also beautifully chill-able, this is pretty perfect.

I can't stop thinking about this one on taco night...preferably barbacoa...