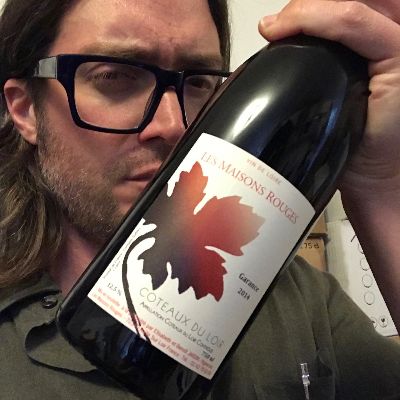 Ahh, Pineau d'Aunis, the Loire varietal that gets little love...or, not as much love as it should...

That's a shame, as this lovely Coteaux du Loire Garance 2014 from Les Maisons Rouges is about to demonstrate (after you buy it and drink it, of course).

Here I go again with another 'when I was first starting out' story...

...but when I was first starting out, the Loire was ascendant among the wine geek crowd.  Big 'internationally-styled' wines were dominant, and as a wise-ass 24 year old, there was nothing cooler than 'anti big' wines...most especially when they were made with totally obscure grapes.

I mean, what better way to be a self-important wise-ass than to rattle off grapes that nobody's heard of?

...other than sending out wine emails with pictures of yourself making stupid faces all the time, that is...

(While I'm at it, these kids nowadays don't know how good they have it!  They have an infinitely longer list of obscure grapes, countires and odd styles at their fingertips with which to be cool-kid-y and pretentious...)

Anyway...thankfully, we grow out of such phases, but nonetheless, I would jump at any chance I got to drink and/or introduce someone to a wine made of Cab Franc's delightful, overlooked cousin, Pineau d'Aunis.

Like any grape, Pineau can range in style - some (see Belliviere's) can be rather edgy and intensely savory.  Others are made in the fresh, juicy 'glou-glou' style, which are also lovely.  Then there are ones like today's wine, that really lace it down the middle.

Les Maisons Rouges makes a nice little range of honest and delicious wines - the whites solely of Chenin (in the appellations of Jasnieres and Coteaux du Loire) and the reds solely of Pineau d'Aunis.

Actually, when Elisabeth and Benoit Jardin founded the MR in 1994, they also had Gamay and Cab Franc among their vineyards, but made the choice to focus solely on Pineau d'Aunis...which was totally awesome on their part...

They have been farming organically since 2002 and are Certified Biodynamic since 2009.

Here, they produce a wine that just sings the character of Aunis so perfectly.  It's light-to-medium in both color and weight, but is bursting with highly-aromatic, super-pure, juicy red fruit, that dances down your palate, leaving a trail of white pepper and minerals in its wake.  Like I was saying, the best of both worlds here - elegant and affable, but also full of unique character.

I should also point out that this is the 2014 vintage of the Garance, so it already has a bit of age under its belt, which is definitely a factor into why this lovely little wine is so wide open right now.

The weather has been trying to turn Spring-y here in NYC, and so wines like this are lurking in my conscience, waiting for a warm enough day to warrant a fresh, slightly chilled glass of light red.

Unfortunately, there's not a whole lot of this one, so it's a 'get it now or spend the Spring/Summer not knowing what you missed' kind of scenario...if there is such a thing...

And, just in case you feel like being a pretentious cool kid...well...