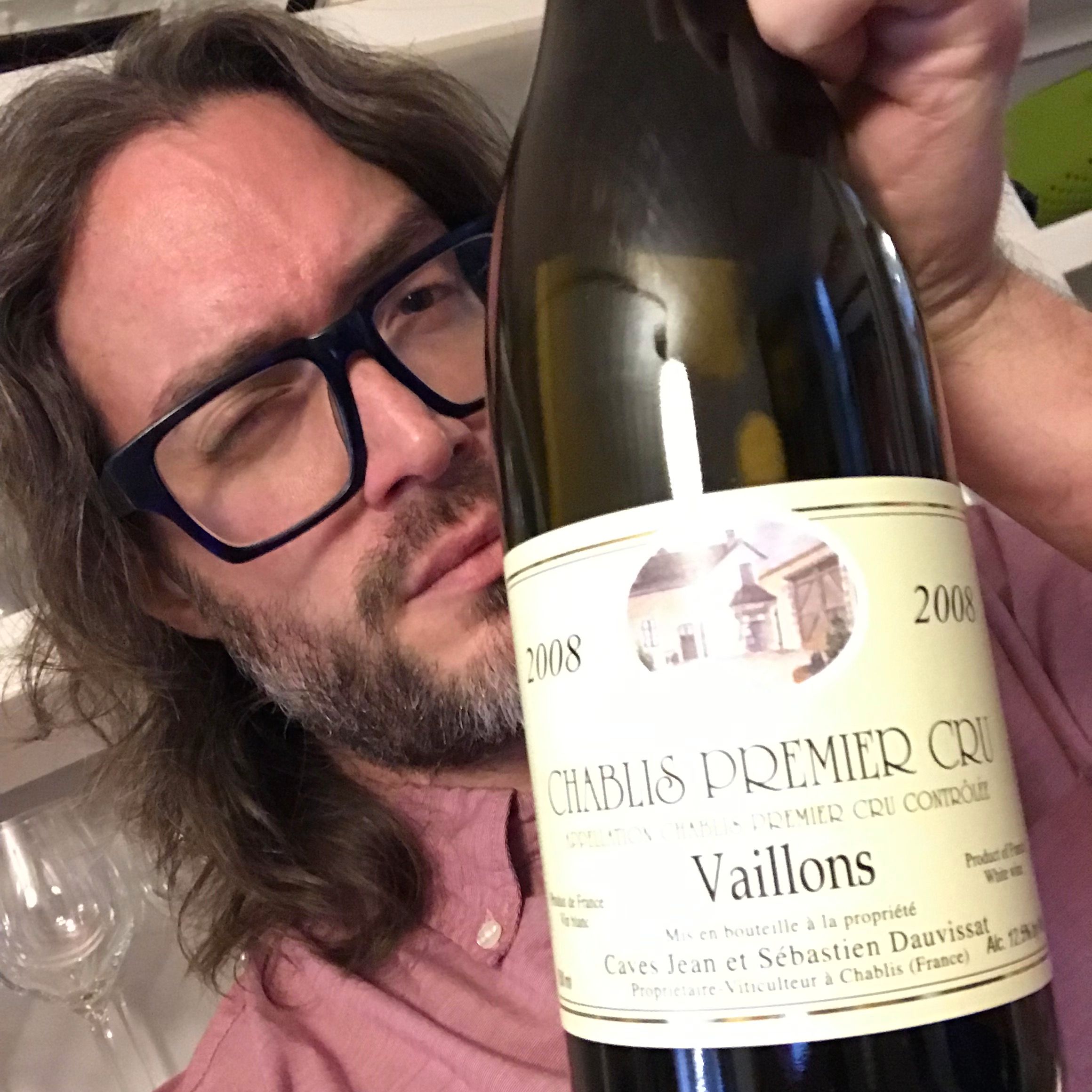 Those three words are usually more than enough to sell what I'm hawking today, but, as it's my wont to blather on about things, I'll keep my streak alive.

On New Year's Eve, our friends Ryan and Tracy held their annual afternoon-into-night gathering.  What was once a marathon day of (mostly) Champagne consumption has, since we now have kids at the same pre-school, has become a gathering of other pre-school families.  It's the same amount of fun, and, for the most part, the same amount of celebratory consumption, but these days, with the hopes of something remotely resembling a decent bedtime, it feels a bit more like a sprint.

In any case, when we got there, Ryan mentioned that he'd pulled some things from deep in the wine fridge that he thought would be good for a party.  The white he'd selected was the 2008 Chablis 1er Cru Vaillons VV from Jean et Sebastien Dauvissat.

We pulled the cork and, upon the first whiff and sip, confirmed that it was indeed drinking beautifully.

It was delicate in both build and texture, but there was a superb mineral core to it, and just a hint of that wooly, nutty development at the edges.

Being that my brain was generally fried from a mad-dash of a holiday season, I wasn't 100% sure, but I thought he'd bought it from me.

Later, when I was extolling the wines virtues to the rest of the crowd, Ryan came over to grab another taste.

'You remember that I bought this from you, right?' he asked.

'Yeah, it was a case I bought a few years ago and had gotten buried.'

Suddenly, it all came flooding back - I'd sent an offer for the '08 Vaillons VV nearly four years ago, talking at length about a) how good it was drinking at the time and, more importantly, b) how amazing it would be with a few years in the cellar, allowing that 2008 mineral goodness to blossom even more.

Even though I feel like I have enough experience to speak with confidence about these things, it's always a very rewarding feeling when I'm proven correct.  So...hooray for me I guess...

Anyway, Ryan and I had a number of other delicious things picked out as well and, even though they all proved to be pretty amazing choices, I will admit that I found myself coming back to the Chablis more than a few times.

At some point during the evening, I texted Blake (my rep from Rosenthal) a picture of the bottle and said 'I'm at a party right now, and this is drinking beautifully!  Let's be sure to get these back into the rotation.'

'Yes, that one is great,' he said.  'I actually have the last bit of the 2008 Vaillons in stock, but it's not the VV, just the regular Vaillons.'

Yesterday, those last remaining cases were delivered.  I know what you're thinking, because I was thinking the same thing...how is the non-VV holding up versus the VV?

Very well, though it's a bit of a different wine.  Where the VV had a richer texture to it, the normale (for lack of a better word) is all about the cut.  This is an ethereal, delicate, intensely focused wine that's as racy as I imagine it's possible for Chardonnay to be.

There's plenty of the flinty, mineral character you expect, but it's not as weighty and pronounced as the VV.  This is a wine of pure nuance - one that's screaming for a crudo/sushi setting, or any other delicate seafood meal.

The vein of brisk acidity that races through it reminds me of the Extra-Brut-iest of Blanc de Blancs from one of many Champagne growers out there...just without the bubbles, of course.

J&S Dauvissat's Chablis have always been lean, mean and understated, and this 2008, is a prime example of that style...a style I adore.

2008, with its focus on restraint, aromatics and mineral focus, has long been a favorite vintage of mine in France in general, and this '08 Vaillons is one more example of why.