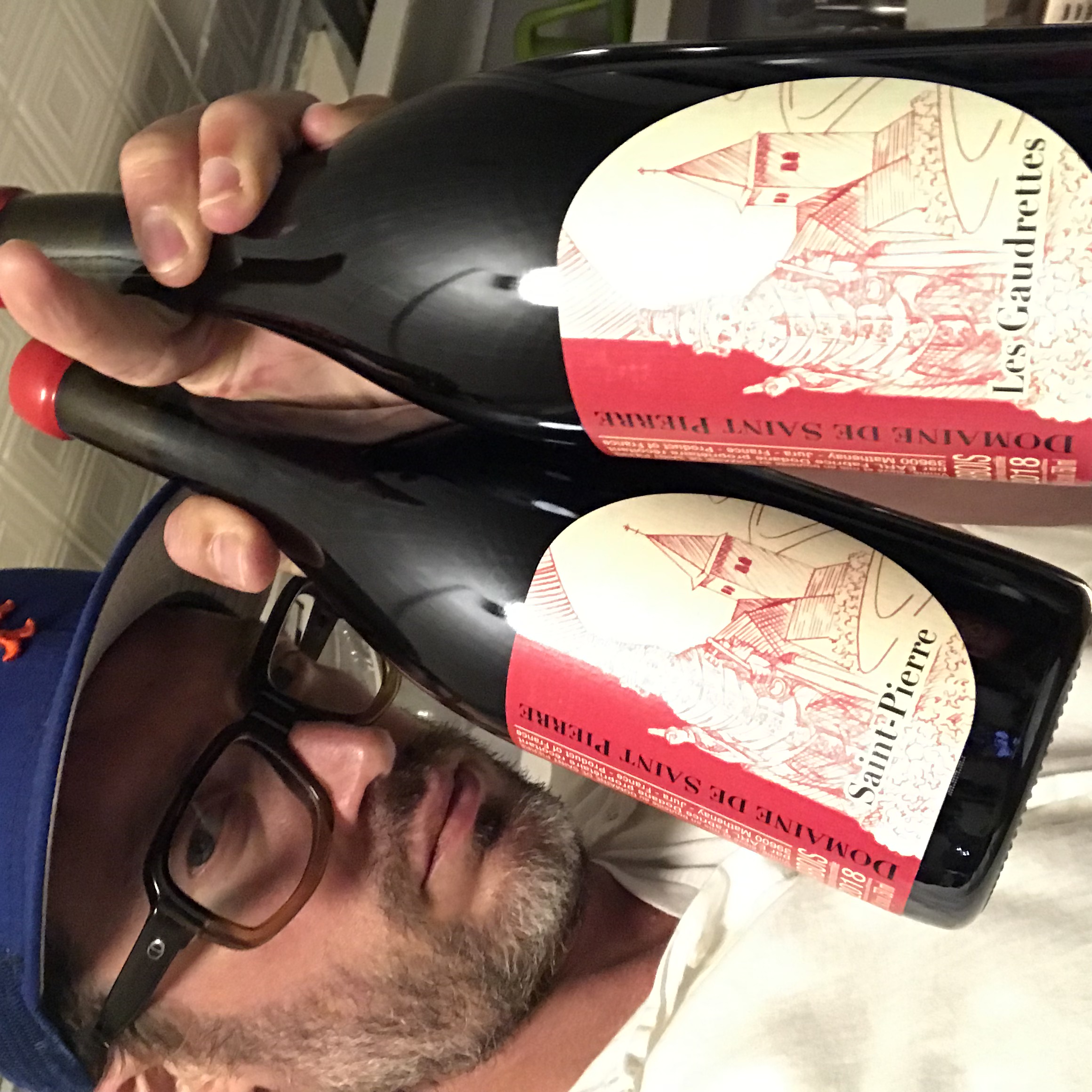 A couple of years ago, I wrote about the wines of Fabrice Dodane's terrific Domaine Saint Pierre...well, to be more specific, I wrote about visiting Saint Pierre with my buddy's Mike and Jason in the Summer of 2018 where I was introduced to some real-deal Coq au Vin Jaune, and how gloriously well it paired with his Savagnin de Voile.

On that trip, Fabrice was the first producer we visited.

Last Summer (2019), at the tail end of our trip through Southern Italy (which I've referenced in several newsletters already, and have more to add yet), we spent the last two days hitting Falkenstein in the Mosel, Marc Tempé in Alsace, and, finally, pulled up to Fabrice's winery on the very last night of what had already been a heck of a death march, to say the least.

After some quick rides through the vineyards, where Fabrice had detailed the difficulty he'd had over the last four harvests (there will only be ONE red wine when the 2019s come out next year), we returned to the winery to taste through barrels in various stages of completeness.

Weary from the week-plus of so much food and wine, we sat down to dinner, thinking perhaps it would be a nice, low-key final night of the trip.  After all, we had to be up and on the road super early the next morning to make our train back to Paris.

I not exactly sure why we, or at least I, had any such expectations of 'low-key-ness', though - after all, we were with Fabrice.  At dinner we were joined by Fabrice's Mom and Brother Coco (that's what he goes by, at least)...and dinner was going to be fondue.

So much for a 'light' meal...No complaints, though.  I mean, may as well go out with a bang.  We loosened up with plenty (emphasize plenty) of Fabrice's wine, while Coco gave us a lesson in traditional Jura fondue.  A bit of chopped garlic and some white wine (Fabrice's, of course) is slowly, gently warmed over low heat in the bottom of a heavy pan.  Once fragrant, in goes the cheese, one handful at a time...slowly, gently, constantly stirred so as to make sure that the cheese doesn't separate...patience is key.

Finally, you're left with just one more example of how a few simple ingredients can create the sublime.

Eating fondue with the locals isn't a walk in the park, though - Coco was very keen to observe everyone's dipping technique, and any poorly-cheesed bread chunk was quickly, well, mocked...all in good fun, that is.

When the pot was empty, we quickly set about making Round 2 - Fabrice's Mom emerged from the kitchen with TWO MORE huge casseroles full of shredded Comté...no amateurs allowed.

All along, though, each crusty, gooey bite, with each sip of whichever of the array Fabrice's wines we had on the table, was a perfect match.  The savory, nutty whites played off the similar notes in the cheese, and the delicate, bright and earthy reds offered plenty of counterpoint to the sharp richness.  The lively acids in both kept your palate fresh for each new bite.

After more cheese than I think I've ever consumed in a single sitting and just about as much wine as I can remember, we began to wander over to Fabrice's whisky shelf, which displays just about every super-rare, one off bottling that Michel Couvreur ever produced.  Fabrice is, after all, very good friends with Jean Arnaud, so he's been getting the good goods for a long time.

So, fully gorged, and with the whisky going down easy, the clock ticked over into the AM and, somewhere in the back of our minds, the early wake up loomed.  It was sometime around then that Mike received a call from Air France that our flight had been cancelled.

I can't recall the finer details, but he somehow managed to talk them into getting us on an earlier flight instead of one the next day. We all thought it would be smart to end the night at the point, only to notice that Fabrice had just emerged from the cellar with two more bottles of wine...these two wines, the Les Gaudrettes and the Cuvée Saint Pierre.

We knew that there was little protesting we could do because he was our ride back to the hotel, and he'd be the judge of when everyone was done.

Such is a visit with Fabrice...

(We ended up making it to the train the next morning...somehow...)

So, while it's not really 'fondue season' per se, both of these airy, earthy and subtly beautiful examples of Arbois Pinot Noir are also perfectly refreshing accompaniments to Summer lunches and dinners...with a slight chill, of course.

And if you feel like making Fondue, well, let me know...I may even be able to find the video(s) I shot of Coco's impromptu seminar.

The St P is Fabrice's top Pinot Noir and this '18 might be the best version of it yet.  Whole-cluster fermentation in stainless is followed by ageing in a large Foudre.  Compared to the Gaudrettes, the Saint Pierre is slightly denser, but we're still talking about a wonderfully delicate, ethereal expression of Arbois Pinot here.  The earth-tinged red fruits have a deeper pitch to them, but they're still bright and airy in nature, while the texture that's built into it adds a nice mouthfeel.  The subtle structure on the back'll allow this to develop nicely in the cellar, too.