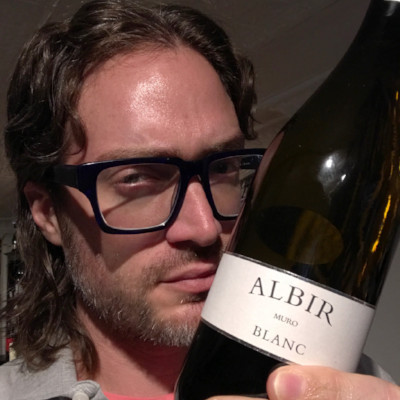 There's something about aged Spanish whites and the thought of Thanksgiving...the food of Thanksgiving.  The overwhelming smells and flavors, the way they mend together in your mind with long-lost memories to form a general idea of the holiday...when I 'smell' or 'taste' the day in my mind, the nutty, waxy, woods-y nature of older Spanish whites always seems to weasel its way into such a thought.

The closest comparison I can think of is if someone were to sing the first half of a line from your favorite song...your brain automatically sings the second half...that kinda thing.

When I think Thanksgiving, I, a moment later, think oxidative, woody, savory...but with that distinct Spanish accent.

SO, now that I've gotten this one off to a really weird start...let me bring it back down to earth.

I'll say this, the flavor of older Spanish whites - the really serious ones, like old Rioja, etc. - is certainly not for everyone.

That's why I was so excited when I happened across today's wine a few weeks ago - the Albir Blanco 2011 of Cellar la Muntanya - because I found that it was, first and foremost, a really tasty wine, but it was a 'primer', if you will, of that 'old Spanish white' thing.

Given its age, it's still remarkably fresh and focused - which isn't that much of a surprise, I suppose.  I actually remember it when it was young and it was quite a lazer beam.

But it has fleshed out a lot and the really nice deeper, oilier, more intense elements are just beginning to emerge.

So you have a wonderful duality going -

A bit citric, a bit nutty.

A bit floral, a bit earthy.

A bit oily, a bit briny.

A bit evolved, a bit bracing.

And so on...which kinda makes it great at being able to tackle all kinds of foods...which makes it a great 'Fall' white...which means that, yes, it's a great Thanksgiving white...

Being someone who mostly eats sides at Thanksgiving, I'm kinda looking especially forward to some of this with the creamed onions w/bacon.